Koszalin is first mentioned in 1108 in the Chronicle of Greater Poland (Kronika Wielkopolska) which relates that duke Boleslaw Krzywousty captured and subjugated multiple Pomeranian cities including Kołobrzeg, Kamień, Wolin and Koszalin.[citation needed]

In 1214, Bogislaw II, Duke of Pomerania, made a donation of a village known as Koszalice/Cossalitz by Chełmska Hill in Kołobrzeg Land to the Norbertine monastery in Białoboki near Trzebiatów. New, mostly German, settlers from outside of Pomerania were invited to settle the territory. In 1248, the eastern part of Kołobrzeg Land, including the village, was transferred by Duke Barnim I to the Roman Catholic Diocese of Kammin.[2]

On 23 May 1266, Kammin bishop Hermann von Gleichen granted a charter to the village, granting it Lübeck law, local government, autonomy and multiple privileges. When in 1276 the bishops became the sovereign in neighboring Kołobrzeg, they moved their residence there, while the administration of the diocese was done from Koszalin.[2]

The city obtained direct access to the Baltic Sea when it gained the village of Jamno (1331), parts of Lake Jamno, a spit between the lake and the sea and the castle of Unieście in 1353. Thence, it participated in the Baltic Sea trade as a member of the Hanseatic League, which led to several conflicts with the competing seaports of at Kołobrzeg and Darłowo. From 1356 until 1417/1422, the city was part of the Duchy of Pomerania-Wolgast.

In 1534 during the Protestant Reformation, the city became mostly Lutheran under the influence of Johannes Bugenhagen. In 1568, Johann Friedrich, Duke of Pomerania and bishop of Cammin, started constructing a residence.[3] After the 1637 death of the last Pomeranian duke, Bogislaw XIV, the city passed to his cousin, Bishop Ernst Bogislaw von Croÿ of Kammin. Occupied by Swedish troops during the Thirty Years' War, the city was granted to Brandenburg-Prussia after the Treaty of Westphalia (1648) and the Treaty of Stettin (1653), and with all of Farther Pomerania became part of the Brandenburgian Pomerania.

As part of the Kingdom of Prussia, "Cöslin" was heavily damaged by a fire in 1718, but was rebuilt in the following years. It was occupied by French troops in 1807 after the War of the Fourth Coalition. Following the Napoleonic wars, the city became the capital of Fürstenthum District (county) and Regierungsbezirk Cöslin (government region) within the Province of Pomerania. The Fürstenthum District was dissolved on 1 September 1872 and replaced with the Cöslin District on December 13.

It became part of the German Empire in 1871 during the unification of Germany. The railroad from Stettin (Szczecin) through "Cöslin" and Stolp (Słupsk) to Danzig (Gdańsk) was constructed from 1858-78. A military cadet school created by Frederick the Great in 1776 was moved from Kulm (Chełmno) to the city in 1890.

After the Nazis had closed down Dietrich Bonhoeffer's seminar in Finkenwerder in 1937, Bonhoeffer chose the town as one of the sites where he illegally continued to educate vicars of the Confessing Church.[4] During the Second World War "Köslin" was the site of the first school for the "rocket troops" created on orders of Walter Dornberger, the Wehrmacht's head of the V-2 design and development program.[5] 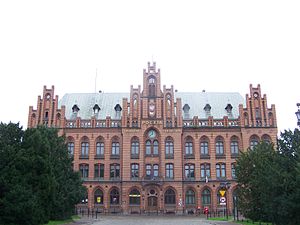 On 4 March 1945, the city was captured by the Red Army. According to the post-war Potsdam Agreement, Koszalin became part of Poland. Most of the German population fled or was expelled to post-war Germany. The city was resettled by Poles from Central and pre-war Eastern Poland and Kashubians.

Before World War II the population of the town was composed of Protestants, Jews and Catholics.

The climate of Koszalin is a borderline climate between oceanic climate type and a Humid Continental climate type. The winters are cold and snowy, and the summers are cool and rainy. Typical of Northern Europe, there is little sun throughout the year.

The city borders on Chełmska hill (German: Gollenberg), a site of pagan worship in prehistory, and upon which is now built the tower "sanctuary of the covenant", which was consecrated by Pope John Paul II in 1991, and is currently a pilgrimage site.

Koszalin's most distinctive landmark is St. Mary's cathedral (Marienkirche), dating from the early 14th century. Positioned in front of the cathedral is a monument commemorating John Paul II's visit to the city.

Koszalin is twinned with:[7]