The Kronos Quartet is an American string quartet based in San Francisco. They have been in existence with a rotating membership of musicians for over forty years. The quartet specializes in contemporary and new music, with more than 750 works having been written for them.

The quartet was founded by violinist David Harrington in Seattle, Washington. Its first performance was in November 1973.[1] Since 1978, the quartet has been based in San Francisco, California. The longest-running combination of performers (from 1978 to 1999) had Harrington and John Sherba on violin, Hank Dutt on viola, and Joan Jeanrenaud on cello. In 1999, Joan Jeanrenaud left Kronos because she was "eager for something new";[2] she was replaced by Jennifer Culp[3] who, in turn, left in 2005 and was replaced by Jeffrey Zeigler. In June 2013, Zeigler was replaced by Sunny Yang.[4] With almost forty studio albums to their credit and having performed worldwide, they were called "probably the most famous 'new music' group in the world"[5] and were praised in philosophical studies of music for the inclusiveness of their repertoire.[6]

By the time the quartet celebrated their twenty-fifth anniversary, in 1999, they had a repertoire of over 600 works, which included 400 string quartets written for them, more than 3,000 performances, seven first-prize ASCAP awards, Edison Awards in classical and popular music, and had sold more than 1.5 million records.[7]

When Kronos turned 30, in 2003, they decided on a commissioning process for composers under the age of 30, in the hope of bringing some of the talented young composers to light. The program, called the Under 30 Project, is now run in cooperation with Carnegie Hall, Cal Performances at the University of California, Berkeley, and the Montalvo Arts Center. The first recipient was Alexandra du Bois (at the time a student at Indiana University, later a Juilliard School graduate),[8] followed by Felipe Perez Santiago (born in Mexico in 1973),[9] and Dan Visconti (born in Illinois in 1982);[10] in 2007, Israeli composer Aviya Kopelman became the fourth.[11]

To celebrate the fortieth year of the organization the Kronos Quartet plans to return to Seattle, the city in which they first played, and work in collaboration with Seattle's Degenerate Art Ensemble to create a piece incorporating music, dance and video.[1] They celebrated their 40th Anniversary with a sold out performance at Zellerbach Hall, U C Berkeley in December 2013. The same year, Michael Giacchino, a soundtrack composer who often names his pieces with puns, published a song named after them as a part of the soundtrack to Star Trek into Darkness (the name of the song is "The Kronos Wartet"), for a scene that takes place on the fictional planet "Kronos."[12]

Kronos specializes in new music/contemporary classical music and has a long history of commissioning new works. Over 750 works have been created for the Kronos Quartet.[1] They have worked with many minimalist composers including John Adams, Arvo Pärt, George Crumb, Henryk Górecki, Steve Reich, Philip Glass, Terry Riley, and Kevin Volans; collaborators hail from a diversity of countries – Kaija Saariaho from Finland, Pēteris Vasks from Latvia, Franghiz Ali-Zadeh from Azerbaijan, Homayun Sakhi from Afghanistan, Victoria Vita Polevá from Ukraine and Fernando Otero,[13] Astor Piazzolla,[14] and Osvaldo Golijov from Argentina. Some of Kronos' string-quartet arrangements were published in 2007.[15]

"I've always wanted the string quartet to be vital, and energetic, and alive, and cool, and not afraid to kick ass and be absolutely beautiful and ugly if it has to be. But it has to be expressive of life. To tell the story with grace and humor and depth. And to tell the whole story, if possible."
—David Harrington[16]

On the 1998 Dave Matthews Band album Before These Crowded Streets, Kronos Quartet performed on the tracks "Halloween" and "The Stone". They also appeared on the 2007 Nine Inch Nails remix album, Year Zero Remixed doing a rendition of the track "Another Version of the Truth"". They also performed Lee Brooks' score for the short film 2081, based on the Kurt Vonnegut short story "Harrison Bergeron." 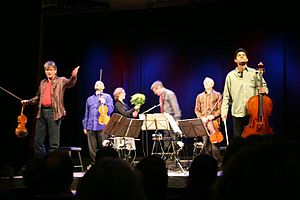 Greeting the audience after a 2005 performance 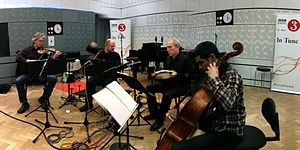 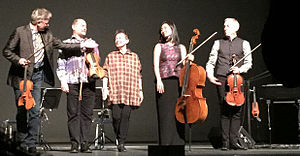 On stage with Laurie Anderson, after performing LANDFALL at the Harris Theater on 17 March 2015