Kumyk (къумукъ тил,[3] qumuq til) is a Turkic language, spoken by about 426,212[4] speakers (the Kumyks) in the Dagestan republic of Russian Federation.

Irchi Kazak (Yırçı Qazaq; born 1839) is usually considered to be a founder of Kumyk literature. Kumyk was written using Arabic script until 1928, Latin script from 1928–1938, and Cyrillic script since then.

It was composed sequentially of several Turkic dialects—those of the Oghur, Oghuz and Kypchak types—, which, in addition, have been interacting with Caucasian languages, namely Avar, Dargwa, Chechen, as well as with Ossetic.[3] The language has also been influenced by Russian during the last century. 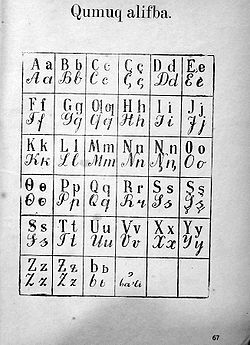 Cyrillic based alphabet (since 1937)