Kunigunde of Austria (German: Kunigunde von Österreich) (16 March 1465 – 6 August 1520) was an Austrian Archduchess member of the House of Habsburg and by marriage Duchess of Bavaria-Munich and since 1503 over all Bavaria. 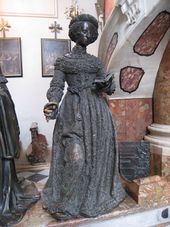 Born in Wiener Neustadt, Kunigunde was the fourth of five children born to the Imperial couple; however, only she and her older brother Maximilian survived to adulthood.[1][2] She grew up in an informal and open atmosphere, without rigid court etiquette. Contrary to former practice, she learned not only to read, write, and embroider, but also received instruction in riding and hunting, astronomy and mathematics.[3]

Like most daughters of royal families, since her early years Kunigunde was involved in the political intrigues of her time. In 1470 King Matthias Corvinus of Hungary requested her hand; however, Frederick III refused him. At the age of fifteen, in 1480, Kunigunde made her formal presentation in Vienna during the visit of George, Duke of Bavaria, called "the Rich" to Frederick III's court. After the celebrations she was sent to Burggraf Ulrich III von Graben to Graz for her safety; however, after a plot against the Emperor was discovered, he moved to Linz and sent Kunigunde to Innsbruck with Sigismund, Archduke of Further Austria and ruler of Tirol, Frederick III's first cousin and former guardian.

Kunigunde married Albert IV, Duke of Bavaria-Munich in 1487 against the will of her own father, and served as joint regent for son Wilhelm IV. In spite of her resignation from court life, she tried to influence the politics of the state as she acted in favour of the rights of her younger sons. She was in close contact with her brother, Emperor Maximilian I, and with other rulers and relatives in Europe.

With Albert IV, Duke of Bavaria-Munich she had Seven children:

After the death of Albert in 1508 she later joined the Convent of Püttrich which she favoured and lived there until her death in 1520.