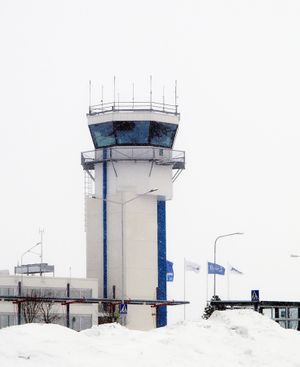 Kuopio Airport (IATA: KUO, ICAO: EFKU) is an airport in Siilinjärvi, Finland, about 14 kilometres (9 mi) north of Kuopio city centre. It is the seventh busiest airport in Finland, as measured by the number of passengers (ca. 254,000 in 2010).[2]

Kuopio Airport was completed in November 1939 and flight operations started in May 1940. It was used by the Luftwaffe during World War II (1942–43). During the Continuation War the runways were made from plywood. The first terminal building was opened in 1949 before a new one replaced it in 1971. In 2004, Kuopio Airport was chosen as the Airport of the Year in Finland.[3] As of 2006[update], Kuopio Airport was one of only five profitable airports in Finland,[4] thanks to shared use of the runways by the Karelian Air Command of the Finnish Air Force and civilian airlines. Kuopio had its first international scheduled route when AirBaltic operated direct flights to Riga in 2008–2011.

A unique airport Lake terminal was completed in March 2008. The terminal is situated some 200 metres (660 ft) from the airport tower. It connects the airport to Lake Saimaa region.