Kurdish (کوردی, Kurdî) is a continuum of Northwestern Iranian languages spoken by the Kurds in Western Asia. Kurdish forms three dialect groups known as Northern Kurdish (Kurmanji), Central Kurdish (Sorani), and Southern Kurdish (Pehlewani). A separate group of languages, Zaza-Gorani, is also spoken by several million Kurds, but is linguistically not Kurdish.[3][4][5][6] Recent (as of 2009) studies estimate between 20 and 30 million native speakers of Kurdish in total.[7]

The literary output in Kurdish was mostly confined to poetry until the early 20th century, when more general literature began to be developed. Today, there are two principal written Kurdish dialects, namely Kurmanji in the northern parts of the geographical region of Kurdistan, and Sorani further east and south. The standard Sorani form of Central Kurdish is, along with Arabic, one of the two official languages of Iraq and is in political documents simply referred to as Kurdish.[8][9]

Windfuhr identified Kurdish dialects as Parthian, albeit with a Median substratum.[13]

The present state of knowledge about Kurdish allows, at least roughly, drawing the approximate borders of the areas where the main ethnic core of the speakers of the contemporary Kurdish dialects was formed. The most argued hypothesis on the localisation of the ethnic territory of the Kurds remains D.N. Mackenzie's theory, proposed in the early 1960s (Mackenzie 1961). Developing the ideas of P. Tedesco (1921: 255) and regarding the common phonetic isoglosses shared by Kurdish, Persian, and Baluchi, Mackenzie concluded that the speakers of these three languages may once have been in closer contact.

He has tried to reconstruct the alleged Persian-Kurdish-Baluchi linguistic unity presumably in the central parts of Iran. According to Mackenzie's theory, the Persians (or Proto-Persians) occupied the province of Fars in the southwest (proceeding from the assumption that the Achaemenids spoke Persian), the Baluchis (Proto-Baluchis) inhabited the central areas of Western Iran, and the Kurds (Proto-Kurds), in the wording of G. Windfuhr (1975: 459), lived either in northwestern Luristan or in the province of Isfahan.[14]

Kurdish is divided into three groups, where dialects from different groups are not mutually intelligible without acquired bilingualism.[15][16]

Since 1932 most Kurds have used the Roman script to write Kurmanji.... Sorani is normally written in an adapted form of the Arabic script.... Reasons for describing Kurmanji and Sorani as 'dialects' of one language are their common origin and the fact that this usage reflects the sense of ethnic identity and unity among the Kurds. From a linguistic or at least a grammatical point of view, however, Kurmanji and Sorani differ as much from each other as English and German, and it would seem appropriate to refer to them as languages. For example, Sorani has neither gender nor case-endings, whereas Kurmanji has both.... Differences in vocabulary and pronunciation are not as great as between German and English, but they are still considerable.

According to Encyclopaedia of Islam, although Kurdish is not a unified language, its many dialects are interrelated and at the same time distinguishable from other Western Iranian languages. The same source classifies different Kurdish dialects as two main groups, northern and central.[20] The reality is that the average Kurmanji speaker does not find it easy to communicate with the inhabitants of Suleymania or Halabja.[16]

Some linguistic scholars assert that the term "Kurdish" has been applied extrinsically in describing the language the Kurds speak, whereas ethnic Kurds have used the word term to simply describe their ethnic or national identity and refer to their language as Kurmanji, Sorani, Hewrami, Kermanshahi, Kalhori or whatever other dialect or language they speak. Some historians have noted that it is only recently that the Kurds who speak the Sorani dialect have begun referring to their language as Kurdî, in addition to their identity, which is translated to simply mean Kurdish.[21]

The Zaza–Gorani languages, spoken by communities in the wider area who identify as ethnic Kurds, are not linguistically classified as Kurdish.[3][4][5][6] They are classified as adjunct to Kurdish within the Northwestern Iranian languages, although authorities differ in the details. Windfuhr 2009[page needed] groups Kurdish with Zaza Gorani within a "Northwestern I" group, while Glottolog based on Encyclopedia Iranica prefers an areal grouping of "Central dialects" (or "Kermanic") within Northwest Iranic, with Kurdish but not Zaza-Gorani grouped with "Kermanic". [22]

Gorani appears to be distinct from Kurmanji and Sorani, yet shares vocabulary with both of them and some grammatical similarities with Sorani.[23] Hewrami, a dialect of Gorani, was an important literary language since the fourteenth century but was replaced by Sorani in the twentieth.[24]

European scholars have maintained that Gorani is separate from Kurdish and that Kurdish is synonymous with the Kurmanji-language group, whereas ethnic Kurds maintain that Kurdish encompasses any of the unique languages or dialects spoken by Kurds that are not spoken by neighboring ethnic groups.[25]

Gorani is often classified as part of the Zaza–Gorani branch of Indo-Iranian languages.[26] The Zaza language, spoken in the northernmost parts of Kurdistan differs both grammatically and in vocabulary and is generally not understandable by Gorani speakers but it is considered related to Gorani. Almost all Zaza-speaking communities,[27] as well as speakers of another closely related language spoken in parts of Iraqi Kurdistan called Shabaki, identify themselves as ethnic Kurds.[3][28][29][30][31][32]

During his stay in Damascus, historian Ibn Wahshiyya came across two books on agriculture written in Kurdish, one on the culture of the vine and the palm tree, and the other on water and the means of finding it out in unknown ground. He translated both from Kurdish into Arabic in the early 9th century AD.[33]

Among the earliest Kurdish religious texts is the Yazidi Black Book, the sacred book of Yazidi faith. It is considered to have been authored sometime in the 13th century AD by Hassan bin Adi (b. 1195 AD), the great-grandnephew of Sheikh Adi ibn Musafir (d. 1162), the founder of the faith. It contains the Yazidi account of the creation of the world, the origin of man, the story of Adam and Eve and the major prohibitions of the faith.[34] From the 15th to 17th centuries, classical Kurdish poets and writers developed a literary language. The most notable classical Kurdish poets from this period were Ali Hariri, Ahmad Khani, Malaye Jaziri and Faqi Tayran.

The Italian priest Maurizio Garzoni published the first Kurdish grammar titled Grammatica e Vocabolario della Lingua Kurda in Rome in 1787 after eighteen years of missionary work among the Kurds of Amadiya.[35] This work is very important in Kurdish history as it is the first acknowledgment of the widespread use of a distinctive Kurdish language. Garzoni was given the title Father of Kurdology by later scholars.[36] The Kurdish language was banned in a large portion of Kurdistan for some time. After the 1980 Turkish coup d'état until 1991 the use of the Kurdish language was illegal in Turkey.[37] 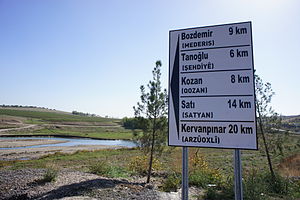 Today, Central Kurdish is an official language in Iraq. In Syria, on the other hand, publishing materials in Kurdish is forbidden,[38] though this prohibition is not enforced anymore due to the civil war.[39]

Before August 2002, the Turkish government placed severe restrictions on the use of Kurdish, prohibiting the language in education and broadcast media.[40][41] The Kurdish alphabet is not recognized in Turkey, and the use of Kurdish names containing the letters X, W, and Q, which do not exist in the Turkish alphabet, is not allowed.[42] In 2012, Kurdish-language lessons became an elective subject in public schools. Previously, Kurdish education had only been possible in private institutions.[43]

In Iran, though it is used in some local media and newspapers, it is not used in public schools.[44][45] In 2005, 80 Iranian Kurds took part in an experiment and gained scholarships to study in Kurdish in Iraqi Kurdistan.[46]

In March 2006, Turkey allowed private television channels to begin airing programming in Kurdish. However, the Turkish government said that they must avoid showing children's cartoons, or educational programs that teach Kurdish, and could broadcast only for 45 minutes a day or four hours a week.[47] However, most of these restrictions on private Kurdish television channels were relaxed in September 2009.[48]

In 2010, Kurdish municipalities in the southeast decided to begin printing water bills, marriage certificates and construction and road signs, as well as emergency, social and cultural notices in Kurdish alongside Turkish. Friday sermons by Imams began to be delivered in the language, and Esnaf provided Kurdish price tags.[49]

The state-run Turkish Radio and Television Corporation (TRT) started its 24-hour Kurdish television station on 1 January 2009 with the motto "we live under the same sky".[50] The Turkish Prime Minister sent a video message in Kurdish to the opening ceremony, which was attended by Minister of Culture and other state officials. The channel uses the X, W, and Q letters during broadcasting.

In Kyrgyzstan, 96.4% of the Kurdish population speak Kurdish as their native language.[51] In Kazakhstan, the corresponding percentage is 88.7%.[52]

According to the Kurdish Academy of Language, Kurdish has the following phonemes:

According to the Kurdish Academy of Language, vowel phonemes of Kurdish are as follows:[56][57]

As in most modern Iranian languages, Kurdish vowels contrast in quality; they often carry a secondary length distinction that does not affect syllabic weight.[58] This distinction appears in the writing systems developed for Kurdish. The four "short" vowels are /ɛ/, /ɪ/, /o/, and /u/. The five long vowels are /aː/, /eː/, /iː/, /uː/ and /ʉː/.[56] Variations occur, e.g. in Southern Kurdish where long vowel /ɑː/ is used instead of /aː/ and short vowel /a/ is used instead of /ɛ/.

The bulk of the vocabulary in Kurdish is of Iranian origin, especially of northwestern Iranian. A considerable number of loanwords come from Semitic, mainly Arabic, which entered through Islam and historical relations with Arab tribes. Yet, a smaller group of loanwords which are of Armenian, Caucasian, and Turkic origins are used in Kurdish, besides some European words. There are also Kurdish words with no clear etymology. 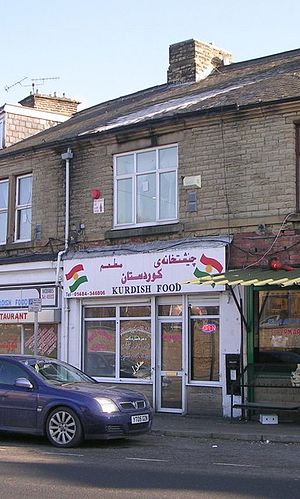 The Kurdish language has been written using four different writing systems. In Iraq and Iran it is written using an Arabic script, composed by Sa'id Kaban Sedqi. More recently, it is sometimes written with a Latin alphabet in Iraq. In Turkey, Syria, and Armenia, it is now written using a Latin script. Kurdish was also written in the Arabic script in Turkey and Syria until 1932. There is a proposal for a unified international recognized Kurdish alphabet based on ISO-8859-1[63] called Yekgirtú. Kurdish in the former USSR is written with a Cyrillic alphabet. Kurdish has even been written in the Armenian alphabet in Soviet Armenia and in the Ottoman Empire (a translation of the Gospels in 1857[64] and of all New Testament in 1872).