Kuressaare (Estonian pronunciation: [ˈkuresˑ'sɑːre]), also known as Arensburg, is a town and a municipality on Saaremaa island in Estonia. It is the capital of Saare County and the westernmost town in Estonia. The population, according to the 2011 census, was 13,166.[1]

The town is situated on the coast of the Gulf of Riga and is served by the Kuressaare Airport, Roomassaare Harbor, and Kuressaare Yacht Harbor. 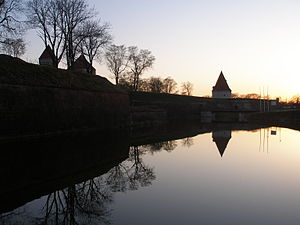 Kuressaare castle towers over the moat at dusk

Its historic name Arensburg[2] (from Middle High German a(a)r: eagle, raptor) renders the Latin denotation arx aquilae for the city's castle. The fortress and the eagle, tetramorph symbol of Saint John the Evangelist, are also the depicted on Kuressaare's coat of arms.

The town, which grew around the fortress, was simultaneously known as Arensburg and Kuressaarelinn; the latter name being a combination of Kuressaare—an ancient name of the Saaremaa Island—and linn, which means town.[3] Eventually, the town's name shortened to Kuressaare[3] and became official in 1918 after Estonia had declared its independence from Bolshevist Russia.[citation needed] Under the Soviet rule, the town was renamed Kingissepa in 1952; after the Bolshevik Kuressaare-native Viktor Kingissepp[3] executed in 1922. The name Kuressaare was restored in 1990.[3] It is called in Finnish: Kuressaari and in German: Arensburg.

The town first appeared on maps around 1154.[citation needed] The island of Saaremaa (German, Swedish: Ösel) was conquered by the Livonian Brothers of the Sword under Volkwin of Naumburg in 1227, who merged with the Teutonic Knights shortly afterwards.[4] The first documentation about the castle (arx aquilae) has been found in Latin texts written in 1381 and 1422. over time, a town, which became known as Arensburg or Kuressaarelinn,[3] grew and flourished around the fortress. It became the see of the Bishopric of Ösel-Wiek established by Albert of Riga in 1228, part of the Terra Mariana.[5] 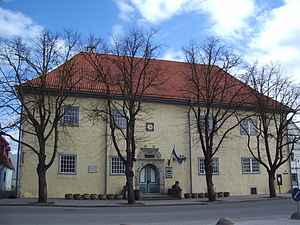 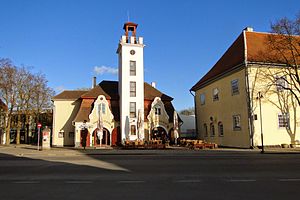 Johann von Münchhausen, bishop since 1542, had turned Protestant. With the advance of the troops of Tsar Ivan IV of Russia in the course of the Livonian War, he sold his lands to King Frederick II of Denmark in 1559 and returned to Germany. Frederick sent his younger brother Prince Magnus to Kuressaare where he was elected as bishop in the following year. From him the city obtained its civic charter, modeled after that of Riga in 1563.[2] The bishopric was finally secularised in 1572 and Kuressaare fell to the Danish crown.

In 1645, it passed to Swedish control by the Treaty of Brömsebro after the Danish defeat in the Torstenson War.[2] Queen Christina of Sweden granted to her favourite Magnus Gabriel de la Gardie the title of a Count of Arensburg, the German and Swedish name by which Kuressaare was known at that time. The city was burnt to the ground by Russian troops in 1710 during the Great Northern War and suffered heavily from the plague.[6] Abandoned by the Swedish it was incorporated into the Governorate of Livonia of the Russian Empire with the 1721 Treaty of Nystad.

During the 19th century Kuressaare became a popular seaside resort on the Baltic coast. During World War I, between September and October 1917, German land and naval forces occupied Saaremaa with Operation Albion. During World War II, the Battle of Tehumardi took place. In October 1990, Kuressaare was the first town in Estonia to regain its self-governing status. 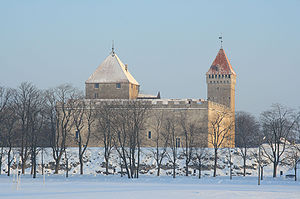 The Kuressaare Castle in winter

The medieval episcopal Kuressaare Castle today houses the Saaremaa Regional Museum. The castle was originally built in wood between 1338 and 1380, although other sources claim a fortess was first built in Kuressaare as early as 1260.[7][8] In 1968, architect Kalvi Aluve began studies on Kuressaare Castle.[9]

The town hall was originally built in 1654, and restored, retaining classicist and baroque features.[6] It was last restored in the 1960s with dolomite stairs at the front.[6] St Nicolaus Church was built in 1790.[6]

Kuressaare is twinned with:[10]