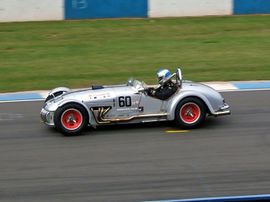 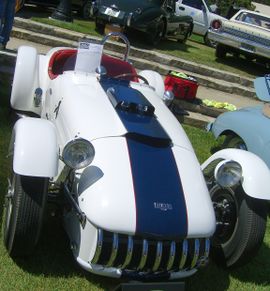 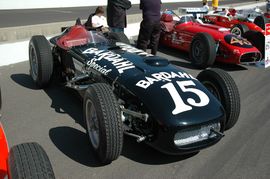 Kurtis Kraft was an American designer and builder of race cars. The company built midget cars, quartermidgets, sports cars, sprint cars, Bonneville Cars, and USAC Championship Cars. It was founded by Frank Kurtis when he built his own midget car chassis in the late 1930s.[1]

Kurtis built some very low fiberglass bodied two-seaters sports cars under his own name in Glendale, California between 1949 and 1955. Ford (US) running gear was used. About 36 cars had been made when the licence was sold to Madman Muntz who built the Muntz Jet. In 1954 and 1955, road versions of their Indianapolis racers were offered.

Kurtis sold the midget car portion of the business to Johnny Pawl in the late 1950s, and the quarter midget business to Ralph Potter in 1962.

The FIA World Drivers' Championship included the Indianapolis 500 between 1950 and 1960, so many Kurtis Kraft cars are credited with competing in that championship. One Kurtis midget car was also entered in the 1959 Formula One United States Grand Prix driven by Rodger Ward. It was not designed for European-style road racing and with an undersized engine it circulated at the back of the field for 20 laps before retiring with clutch problems.[2]