Kushtia (Bengali: কুষ্টিয়া জেলা, Kushtia Jela also Kushtia Zila) is a district in the Khulna administrative division of western Bangladesh. Kushtia has existed as a separate district since the partition of India.[1] Prior to that, Kushtia was a part of Nadia District under Bengal Province of British India. Kushtia was home of many famous people, especially authors and poets. Present day Kushtia is known for the Islamic University, Shilaidaha Kuthibari and Lalon's shrine.

Kushtia, however, is not an ancient township. A river port was developed in the district during the reign of Emperor Shahjahan. Although the British East India Company made extensive use of the port, it was not until indigo planters and traders settled there that the township began to grow. A railway connection was made in 1860 with Calcutta (now Kolkata), capital of British India, which made the town an alluring location for mills and factories, including the Jagneshwar Engineering Works (1896), Renwick and Company (1904), and the Mohini Mills (1919).

In 1860, the Indigo revolt spread throughout the Bengal province. Shalghar Madhua in Kushtia district was one of the forerunners in this movement.[1] It inspired all indigo farmers in Kushtia to refrain from paying government taxes.[1] Subsequently, with the publication of the Indigo Commission Report, an act was passed prohibiting coercion of cultivators for indigo cultivation and the measure led to the end of the movement.[2] 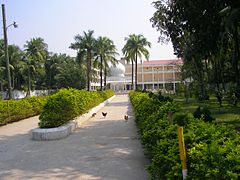 The tomb and shrine of Lalon Fakir is located in Kushtia.

During the Partition of India in 1947, Kushtia was made a separate district, consisting of Kushtia Sôdor, Chuadanga and Meherpur subdivisions. The town once again became attractive for development in 1954 with the establishment of the Ganges-Kobadak Project (also known as G-K Project) headquarters and a number of government offices. The GK Project is a large surface-irrigation system, with the first crop under this project grown in 1962-63.[3]

The district of Kushtia had significant contribution to the Bangladesh Liberation War. A 147-member company of the 27th Baluch Regiment of the Pakistan army reached Kushtia on 25 March 1971 from its base at Jessore cantonment. They initially captured the local police station and settled an outpost there, but soon faced considerable resistance from a group of police, ansars, students and local people. By 1 April, the Pakistany army was completely overpowered and the Mukti Bahini took control of Kushtia.[4] Later on 17 April 1971 the Bangladesh Government in-exile formally announced Proclamation of Independence at Baidyanathtala.[5] Subsequently, battles between the Pakistan army and the rebels occurred at many places of the district including Bangshitala of Kumarkhali Upazila,[6] and Daulatpur Upazila.,[7]

After the independence of Bangladesh several different development projects were undertaken in the district of Kushtia. On 22 November 1979 the foundation stone of The Islamic University was laid at Shantidanga - Dalulpur under the districts of Kustia and Jhenidah. However, In 1982 the University was shifted to Gazipur and admission of students began in the session of 1985-86. Later, on 10 January 1990, the University shifted back to its original site at Shantidanga Dulalpur. In 1984, two subdivisions of Kushtia: Chuadanga[8] and Meherpur[9] were named separate districts.

Ganges, Gôrai, Mathabhanga, Kaligônga, and Kumar are the main rivers flowing through the district. The average high temperature is 37.8 °C and the average low is 9.2 °C. Annual rainfall averages 1,467 millimetres.

Historically, Kushtia was a larger district consisting of three subdivisions, each of which has now become a district. However, the peoples of these three districts, Chuadanga, Meherpur, and Kushtia, share more than just a common past. Most notably, the dwellers of these districts, as the past inhabitants of an undivided Nadia district, speak a dialect remarkably close to what is now considered "standard" Bengali in both West Bengal and Bangladesh. Because of the great commonality between the three districts, they are often referred to as the Greater Kushtia District. Several organisations, such as the "Greater Kushtia Association" and "Greater Kushtia Society", are concerned with the welfare of the entire region. 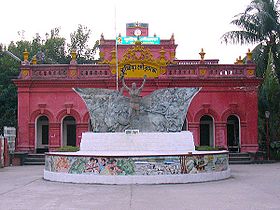 Kushtia was created as a district in 1947 with the partitioning of India. Initially, Kushtia consisted of the Kushtia, Chuadanga and Meherpur subdivisions. Each of these subdivisions was later converted to a separate district for ease of management. The Upazilas are:[1]

******* ATTENTION: could anyone confirm the number Religious institutions?? It seems pretty awkwardly large numbers. Thanks.

Kushtia/Jhenaidah is home to the Islamic University; it also has the following educational institutions: 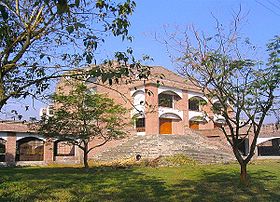 The Rabindra Kuthibari of Shelaidaha is a beautiful mansion where the Nobel laureate Rabindranath Tagore lived to administer his family Zamindari.[11] The Kuthibari,located at Shilaidaha in Kumarkhali Upazila of the Kushtia district, is only 20 km from Kushtia town. He lived here for part of his life, and wrote many memorable poems there. Tagore built the Kuthibari as his office/residence, to collect revenue as a zaminder, from local peasants. The Kuthibari is now a museum, and is cared for by the Archaeological Department of Bangladesh.

The shrine of Lalon Fakir, the founder of the Baoul faith is located at Cheouria, about 2 km from the Kustia railway station.

Kushtia produces a large amount of rice in Khajanagor by auto rice mill (Rashid Auto Rice Mills). It has a big commercial area named Bisic Shilponogory. BRB is a famous brand and a tobacco factory (British American Tobacco). Since 1986 few companies (Rajib rice mill,Rupali rice mill and Dada agro food) started rice producing businesses and today there are almost 350 rice mills are located in Khajanagor, Kushtia playing an important role in the national economy. The famous "Miniket" rice was invented in Khajanagor in the early 1990s.

Kushtia Sugar Mills Limited, a production oriented organization produces sugar in a continuous process from sugar cane.It is from five kilometers away of Kushtia town named the place Jagoti established in 1962 under East Pakistan Industry Development Corporation was amounted to cost Tk.229.18 lacks. The Kushtia Sugar Mills Limited started commercially its operations from 1965 with the capacity of producing 15240.75 metric ton per day

After the liberation of Bangladesh the then president Bangabondhu Shaikh Muzibur Rahman took action for all industries under Nationalization Order-1972 from then it is operated under Bangladesh Sugar & Food Industries Corporation (BSFIC). Season starts from November to March.

b) Southern side  : Railway Station.

a) purchase direct by from cultivators