From Infogalactic: the planetary knowledge core
Jump to: navigation, search
For the river in Angola, see Cuanza River. For the currency, see Angolan kwanza.

Kwanzaa (/ˈkwɑːn.zə/) is a week-long celebration held in the United States and in other nations of the Western African diaspora in the Americas. The celebration honors African heritage in African-American culture, and is observed from December 26 to January 1, culminating in a feast and gift-giving.[1] Kwanzaa has seven core principles (Nguzo Saba). It was created by Maulana Karenga and was first celebrated in 1966–67.

Maulana Karenga created Kwanzaa in 1965 as the first specifically African-American holiday.[2] According to Karenga, the name Kwanzaa derives from the Swahili phrase matunda ya kwanza, meaning "first fruits of the harvest".[3] The choice of Swahili, an East African language, reflects its status as a symbol of Pan-Africanism, especially in the 1960s, although most of the Atlantic Slavery Trade that brought African people to America originated in West Africa.[4]

Kwanzaa is a celebration that has its roots in the black nationalist movement of the 1960s and was established as a means to help African Americans reconnect with their African cultural and historical heritage by uniting in meditation and study of African traditions and Nguzo Saba, the "seven principles of African Heritage" which Karenga said "is a communitarian African philosophy". For Karenga, a major figure in the Black Power movement of the 1960s and 1970s, the creation of such holidays also underscored an essential premise that "you must have a cultural revolution before before the violent revolution. The cultural revolution gives identity, purpose and direction."[5]

During the early years of Kwanzaa, Karenga said that it was meant to be an "oppositional alternative" to Christmas.[6] However, as Kwanzaa gained mainstream adherents, Karenga altered his position so that practicing Christians would not be alienated, then stating in the 1997 Kwanzaa: A Celebration of Family, Community, and Culture, "Kwanzaa was not created to give people an alternative to their own religion or religious holiday."

Many African Americans who celebrate Kwanzaa do so in addition to observing Christmas.[7]

Kwanzaa celebratory symbols include a mat (Mkeka) on which other symbols are placed: a Kinara (candle holder), Mishumaa Saba (seven candles) mazao (crops), Muhindi translation maize plant (corn), a Kikombe cha Umoja (unity cup) for commemorating and giving shukrani (thanks) to African Ancestors, and Zawadi (gifts). Supplemental representations include a Nguzo Saba poster, the black, red, and green bendera (flag), and African books and artworks - all to represent values and concepts reflective of African culture and contribution to community building and reinforcement.[9] 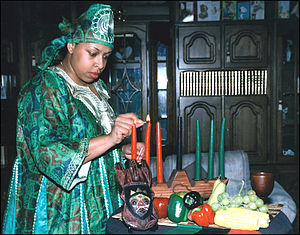 Families celebrating Kwanzaa decorate their households with objects of art, colorful African cloth such as kente, especially the wearing of kaftans by women, and fresh fruits that represent African idealism. It is customary to include children in Kwanzaa ceremonies and to give respect and gratitude to ancestors. Libations are shared, generally with a common chalice, Kikombe cha Umoja, passed around to all celebrants. Non-African Americans also celebrate Kwanzaa.[10] The holiday greeting is "Joyous Kwanzaa".[11][12][13]

A Kwanzaa ceremony may include drumming and musical selections, libations, a reading of the African Pledge and the Principles of Blackness, reflection on the Pan-African colors, a discussion of the African principle of the day or a chapter in African history, a candle-lighting ritual, artistic performance, and, finally, a feast (karamu). The greeting for each day of Kwanzaa is Habari Gani?[14] which is Swahili for "How are you?"[15]

At first, observers of Kwanzaa avoided the mixing of the holiday or its symbols, values, and practice with other holidays, as doing so would violate the principle of kujichagulia (self-determination) and thus violate the integrity of the holiday, which is partially intended as a reclamation of important African values. Today, many African American families celebrate Kwanzaa along with Christmas and New Year's.[citation needed] Frequently, both Christmas trees and kinaras, the traditional candle holder symbolic of African American roots, share space in Kwanzaa-celebrating households. For people who celebrate both holidays, Kwanzaa is an opportunity to incorporate elements of their particular ethnic heritage into holiday observances and celebrations of Christmas.

Cultural exhibitions include the Spirit of Kwanzaa, an annual celebration held at the John F. Kennedy Center for the Performing Arts featuring interpretive dance, African dance, song and poetry.[16][17][18]

The holiday has also spread to Canada, and is celebrated by Black Canadians in a similar fashion as in the United States.[19]

In 2004, BIG Research conducted a marketing survey in the United States for the National Retail Foundation, which found that 1.6% of those surveyed planned to celebrate Kwanzaa. If generalized to the US population as a whole, this would imply that around 4.7 million people planned to celebrate Kwanzaa in that year.[20] In a 2006 speech, Maulana Karenga asserted that 28 million people celebrate Kwanzaa. He has always claimed it is celebrated all over the world.[1] Lee D. Baker puts the number at 12 million.[21] The African American Cultural Center claimed 30 million in 2009.[22] In 2011, Keith Mayes said that 2 million people participated in Kwanzaa.[22]

According to University of Minnesota Professor Keith Mayes, the author of Kwanzaa: Black Power and the Making of the African-American Holiday Tradition, the popularity within the US has "leveled off" as the black power movement there has declined, and now between half and two million people celebrate Kwanzaa in the US, or between one and five percent of African Americans. Mayes adds that white institutions now celebrate it.[10]

The holiday has also spread to Canada and is celebrated by Black Canadians in a similar fashion as in the United States.[19] According to the Language Portal of Canada, "this fairly new tradition has [also] gained in popularity in France, Great Britain, Jamaica and Brazil", although this information has not been confirmed with authoritative sources from these countries.[23]

In Brazil, in recent years the term Kwanzaa has been applied by a few institutions as a synonym for the festivities of the Black Awareness Day, commemorated on November 20 in honor of Zumbi dos Palmares,[24][25] having little to do with the celebration as it was originally conceived.

In 2009, Maya Angelou narrated the documentary The Black Candle, a film about Kwanzaa.