From Infogalactic: the planetary knowledge core
Jump to: navigation, search
In this Japanese name, the family name is Kyōgoku. 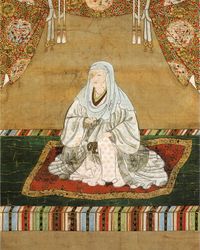 Kyōgoku Tatsuko (京極竜子?) (? – October 22, 1634) was a Japanese woman who lived from the Sengoku Period to the early Edo Period. She was the younger sister of Kyōgoku Takatsugu. She was first the wife of Wakasa daimyo Takeda Motoaki, but after his death she became Toyotomi Hideyoshi's concubine. Her cousin, Chacha, was also a concubine and both of them were best friends. Hideyoshi granted her the name Lady Matsunomaru (松の丸殿?).

After Hideyoshi's death she became a nun under the name Juhō-in (寿芳院?). She also moved to Ōtsu Castle, which was under the command of her brother, in Omi Province, and she was there when the Siege of Ōtsu occurred.