From Infogalactic: the planetary knowledge core
Jump to: navigation, search
This article is about the motor racing circuit in Gauteng, South Africa. For other uses, see Kyalami (disambiguation). 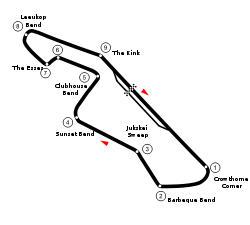 Kyalami Racing Circuit (from Kyalami, My home in Zulu) is a motor racing circuit located in Midrand, Gauteng province, South Africa. The circuit has been used for Grand Prix and Formula One races and has hosted the South African Grand Prix many times. Among the Formula One races held at the track the 1977 South African Grand Prix stands out, as it is principally remembered for the fatal accident that claimed the lives of race marshal Frederick Jansen van Vuuren and driver Tom Pryce. In recent years, the area surrounding the circuit has developed into a residential and commercial suburb of Johannesburg. More recently, Kyalami has played host to five rounds of the Superbike World Championship from 1998 to 2002 and later in 2009 and 2010, the season finale of the Superstars Series in 2009 and 2010, and the South African round of the 2008–09 A1 Grand Prix season.

The original, sweeping circuit was in use from 1961 until political sanctions (due to apartheid policies) eliminated the Grand Prix after the 1985 race.[1] When the circuit was rebuilt in the early 1990s as part of a commercial development, Leeukop Bend, the Kink, Pit lane, the start/finish straight, Crowthorne Corner and Barbeque Bend were all eliminated. Jukskei Sweep was heavily modified to create the entrance into the bend before the then newly built Pit lane and start/finish straight. The remaining part of the old almost historical fast circuit, modified to a lesser degree were Sunset Bend, Clubhouse Bend and the Esses still incorporated into the current configuration, with the result that the circuit became a narrow, twisty ribbon rather than one of the fastest circuits on the calendar. Formula One abandoned the rebuilt circuit in 1993 after just two races and a bankruptcy on the part of the promoter.

Kyalami was changed again with the building of the current pit lane and start/finish straight and later again changes were made, with the addition of a chicane which in turn was removed again for the 2009 World Superbike race.[2] Kyalami came under new management and 2008 saw the 50th Anniversary of the 9-Hour revival being held at Kyalami with golden oldies like David Piper and others.[3] On 6 June 2014, it was announced that Kyalami would be auctioned off on 24 July without reserve.[4] On 24 July 2014, it was auctioned off for R205 million. The winning bidder was Porsche South Africa.[5]