From Infogalactic: the planetary knowledge core
Jump to: navigation, search
For other uses, see Kyrie (disambiguation). 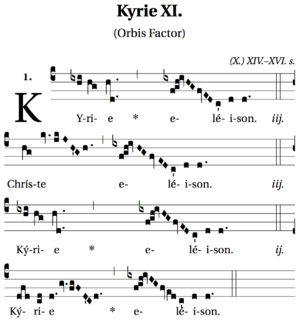 Τhe phrase Kýrie, eléison (Greek: Κύριε, ἐλέησον) or one of its equivalents in other languages is one of the most oft-repeated phrases in Eastern Orthodox and Byzantine-Rite Eastern Christianity.

The various litanies, frequent in that rite, generally have Lord, have mercy as their response, either singly or triply. Some petitions in these litanies will have twelve or even forty repetitions of the phrase as a response.

The phrase is the origin of the Jesus Prayer, beloved by Christians of that rite and increasingly popular amongst Western Christians.

The biblical roots of this prayer first appear in 1 Chronicles 16:34

...give thanks to the LORD; for he is good; for his mercy endures for ever...

The prayer is simultaneously a petition and a prayer of thanksgiving; an acknowledgment of what God has done, what God is doing, and what God will continue to do. It is refined in the Parable of The Publican (Luke 18:9-14), "God, have mercy on me, a sinner", which shows more clearly its connection with the Jesus Prayer.

Since the early centuries of Christianity, the Greek phrase, Kýrie, eléison, is also extensively used in the Coptic (Egyptian) Christian liturgy, which uses both the Coptic and the Greek language.

In the cultures of East Slavs, its adaptation also gave rise to the word of gratitude (Russian: Спасибо, Spasibo) through a rough interpretation Save, God.

In Rome, the sacred Liturgy was first celebrated in Greek. As Christianity gained popularity, the Roman Mass was translated into Latin, but the familiar and venerated Greek prayer Kýrie, eléison was preserved,[citation needed] as were Hebrew phrases such as "Alleluia" and "Hosanna". Jungmann[full citation needed] and other scholars conjecture that the Kyrie in the Roman Mass is a vestige of a litany at the beginning of the Mass, like that of some Eastern churches.

In the Roman Rite liturgy, a variant, Christe, eléison, a transliteration of Greek Χριστέ, ἐλέησον, is introduced.

"Kyrie, eleison" (or "Lord, have mercy") may also be used as a response of the people to intentions mentioned in the Prayer of the Faithful.

Since 1549, Anglicans have normally sung or said the Kyrie in English. In the 1552 Book of Common Prayer, the Kyrie was inserted into a recitation of the Ten Commandments. Modern revisions of the Prayer Book have restored the option of using the Kyrie without the Commandments.

Other denominations also, such as Lutheranism, use "Kyrie, eleison" in their liturgies.

Kyrie as section of the Mass ordinary

In the Tridentine Mass form of the Roman Rite, Kýrie, eléison is sung or said three times, followed by a threefold Christe, eléison and by another threefold Kýrie, eléison. In the Paul VI Mass form, each invocation is made only once by the celebrating priest or by a cantor, with a single repetition, each time, by the congregation. Even if Mass is celebrated in the vernacular, the Kyrie may be in Greek. This prayer occurs directly following the Penitential Rite or is incorporated in that rite as one of the three alternative forms provided in the Roman Missal. The Penitential Rite and Kyrie may be replaced by the Rite of Sprinkling.

In modern Anglican churches, it is common to say (or sing) either the Kyrie or the Gloria in Excelsis Deo, but not both. In this case, the Kyrie may be said in penitential seasons like Lent and Advent, while the Gloria is said the rest of the year. Anglo-Catholics, however, usually follow Roman norms in this as in most other liturgical matters.

For more details on this topic, see Mass (music) § I. Kyrie.

In the Tridentine Mass, the Kyrie is the first sung prayer of the Mass ordinary. It is usually (but not always) part of any musical setting of the Mass. Kyrie movements often have an ternary (ABA) musical structure that reflects the symmetrical structure of the text. Musical settings exist in styles ranging from Gregorian chant to Folk.

In Ecclesiastical Latin a variety of pronunciations are used, the italianate [ˈkirie eˈleison krisˈte eˈleison] having been proposed as a standard.[dubious – discuss] Text underlay in mediaeval and Renaissance music attests that "Ký-ri-e-léi-son" (five syllables) was the most common setting until perhaps the mid-16th century. William Byrd's Mass for Four Voices is a notable example of a musical setting originally written with five syllables in mind, later altered for six syllables.[citation needed]

The Mediaeval poetic form Kyrielle sometimes uses Kýrieléis, an even more drastic four-syllable form, which is reduced to three syllables or even to kyrleis in the German Leise. [laɪzə]

Kyrie is almost invariably a part of musical settings of the mass, including Requiems or Masses for the Dead. Certain kinds of German carol are called Leisen after the use of Kyrieleis, Kyrio-leis, Kirleis or Krles as a refrain.