From Infogalactic: the planetary knowledge core
Jump to: navigation, search
For other uses, see Cythera (disambiguation).

Kythira (/kᵻˈθɪrə/; Greek: Κύθηρα, also transliterated as Cythera, Kythera and Kithira[2]) is an island in Greece lying opposite the south-eastern tip of the Peloponnese peninsula. It is traditionally listed as one of the seven main Ionian Islands, although it is distant from the main group. Administratively, it belongs to the Islands regional unit, which is part of the Attica region (although at large distance from Attica itself).

For many centuries, while naval travel was the only means for transportation, the island possessed a strategic location. From ancient times until the mid 19th century, Kythira was a crossroads of merchants, sailors, and conquerors. As such, it has had a long and varied history and has been influenced by many civilisations and cultures. This is reflected in its architecture (a blend of traditional, Aegean and Venetian elements), as well as the traditions and customs, influenced by centuries of coexistence of the Greek, Venetian, and Ottoman cultures.

Kythira and the nearby island of Antikythira were separate municipalities until they were merged at the 2011 local government reform; the two islands are now municipal units.[3] The province of Kythira (Greek: Επαρχία Κυθήρων) was one of the provinces of the Piraeus Prefecture. It had the same territory as the present municipality Kythira. It was abolished in 2006. 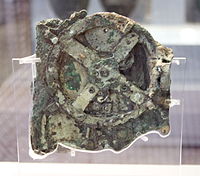 There are archaeological remains from the Helladic period, contemporary with the Minoans. There is archaeological evidence of Kythiran trade as far as Egypt and Mesopotamia.

Kythira had a Phoenician colony in the early archaic age; the sea-snail which produces Tyrian purple is native to the island. Xenophon refers to a Phoenician Bay in Kythira (Hellenica 4.8.7, probably Avlemonas Bay on the eastern side of the island). The archaic Greek city of Kythira was at Scandea on Avlemonas; its ruins have been excavated. Its acropolis, now Palicastro (Palaeocastron, "Old Fort"), has the temple of Aphrodite Ourania, who may well represent a Phoenician cult of Astarte.

In classical times, Kythira was part of the territory of several larger city-states. Sparta took the island from Argos early in the sixth century, and ruled it under a kytherodíkes (kυθηροδίκης, "judge on Kythira"), in Thucydides' time [4,53,3]; Athens occupied it three times when at war with Sparta (in 456 during her first war with Sparta and the Peloponnesians; from 426 to 410, through most of the great Peloponnesian War; and from 393 to 387/386, during the Corinthian War against Spartan dominance) and used it both to support her trade and to raid Laconia.

Kythira was independent, and issued her own coins, in 195, after the Achaean defeat of Sparta. In Augustus' time, it was again subject to Sparta, being the property of Gaius Julius Eurycles, who was both a Spartan magnate and a Roman citizen.

By this time, the Greek cities were in practice subject to the Roman Empire. Kythira continued to exist under the Roman Empire and its Byzantine successor state for centuries. Christianity is attested from the fourth century AD, the time of Constantine; according to her legend, Saint Elessa came from Laconia to convert the island.[4] 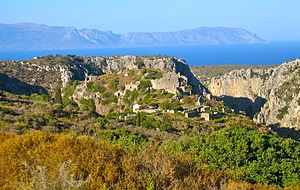 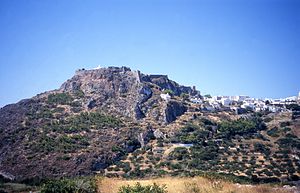 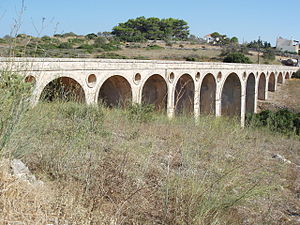 Kythira is not mentioned in the literary sources for centuries after its conversion; in the period of Byzantine weakness at the end of the seventh century, it would have been exposed both to the Slavic tribes who occupied the mainland and to Arab raiders from the sea. Archaeological evidence suggests the island was abandoned about 700 AD.

When Saint Theodore of Cythera led a resettlement after the Byzantine reconquest of Crete in 962, he found the island occupied only by wandering bands of hunters. He established a great monastery at Paliochora; a town grew up around it, largely populated from Laconia.

When the Byzantine Empire was divided among the conquerors of the Fourth Crusade, the Republic of Venice took her share, three eighths of the whole, as the Greek islands, Kythira among them. She established a coast patrol on Kythira and Antikythera to protect her trade route to Constantinople; Kythira was one of the islands Venice continued to hold despite the Greek reconquest of Constantinople and the Turkish presence all over the Near East.[5] During the Venetian domination the island was known as Cerigo.

Kythirans still talk about the destruction and looting of Paliochora by Barbarossa; it has become an intrinsic part of the Kytherian folklore. One can easily accept the stories of locals by noticing the number of monasteries embedded in the rocky hillsides to avoid destruction by the pirates.

When Napoleon put an end to the Venetian Republic in 1797, Kythira was among the islands incorporated in that most distant départment of France, called Mer-Égée. Kythira shared a common destiny with the other Ionian islands during the turbulent Napoleonic era, and is still accounted one of them; it was counted as one of the Cyclades in antiquity.

In 1799, the Ionian islands became the Septinsular Republic, nominally under Ottoman suzerainty, but in practice dominated by Russia. In 1807, France took them back only to have the British seize the islands in 1809 and set up one of their first protectorates, the United States of the Ionian Islands. The British held them for nearly half a century; under the British, they were governed by a High Commissioner who could act with both legislative and executive powers. After a long history of turbulence, never settled even by such eminent Commissioners as William Ewart Gladstone, the British discussion whether they were a waste of money or a vital Imperial possession ended with the cession of the Ionian Islands, including Kythira, to the new King George I of Greece, who was brother-in-law to the Prince of Wales. Under the British, Kythira was known as Carigo or Cerigo, as was its chief town, the name it had under the Venetian Republic.

The chief town of the island, Kythira (or Chora, "village") has the Historical Archives of Kythira, the second largest in the Ionian islands, after Corfu. 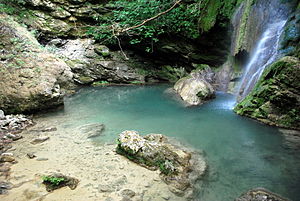 Kythira has a land area of 279.593 square kilometres (107.95 sq mi); it is located at the southwestern exit from the Aegean Sea, behind Cape Malea.[6] The rugged terrain is a result of prevailing winds from the surrounding seas which have shaped its shores into steep rocky cliffs with deep bays. The island has many beaches, of various composition and size; only half of them can be reached by road through the mountainous terrain of the island. The Kythirian Straits are nearby.

Kythira is close to the Hellenic arc plate boundary zone, and thus highly prone to earthquakes. Many earthquakes in recorded history have had their epicentres near or on the island. Probably the largest in recent times is the 1903 earthquake near at the village of Mitata, that caused significant damage as well as limited loss of life. It has had two major earthquakes in the 21st century: that of November 5, 2004, measuring between 5.6 and 5.8 on the Richter scale and the earthquake of January 8, 2006, measuring 6.9 on the Richter scale. The epicenter of the latter was in the sea about 20 km (12 mi) to the east of Kythira, with a focus at a depth of approximately 70 km (43 mi). Many buildings were damaged, particularly old ones, mostly in the village of Mitata, but with no loss of life. It was felt as far as Italy, Egypt, Malta and Jordan.

Like many of the smaller Aegean islands, Kythira's population is decreasing. While the island had reached a peak population of about 14,500 in 1864, that has steadily declined mostly due to emigration, both internal (to major urban centres of Greece) and external (to Australia, the United States, Germany) in the first half of the 20th century. Today its population hovers around 3,354 people (2001 census). 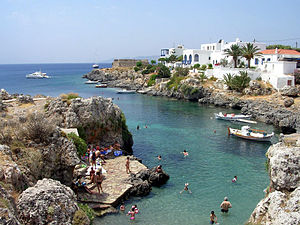 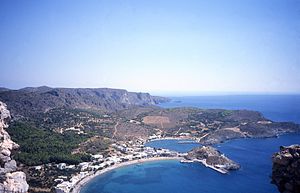 View of Kapsali from the castle of Chora

Since the late 20th century, the Kythirean economy has largely focused and, in the process, has become dependent on tourism, which provides the majority of the island's income, despite the fact that Kythira is not one of the most popular tourist destinations in Greece. The popular season usually begins with the Greek holiday of Pentecost at the end of May, and lasts until the middle of September. During this time, primarily during August, the island's population will often triple due to the tourists and natives returning for vacation. Dependence on tourism has resulted in increased building activity in many of the island's villages, mostly for commercial purposes (hotels and hospitality facilities, shops etc.), but also secondary homes; prominent examples are Agia Pelagia and Livadi, both of which having witnessed significant growth in their size since the early 1990s.

Minor sources of revenue are thyme honey, famous within Greece for its rich flavor, as well as some small-scale cultivation of vegetables and fruit and animal husbandry that is, nevertheless, increasingly restricted to local consumption.

Only five of the island's villages are on the coast (Platia Amos, Agia Pelagia, Diakofti, Avlemonas, & Kapsali). During July and August, several traditional dances will be held in various villages. These dances usually attract the majority of the island's population, the biggest of which are the festival of 'Panagia' in Potamos on 15 August, and the wine festival in Mitata on the first Friday and Saturday of August.

View of the capital, Chora 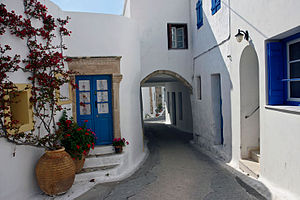 The capital, Chora, is located on the southern part of the island having no ports connected to the southern Peloponnese or Vatika. Kythira's port for Vatika was previously situated at Agia Pelagia, although in recent years this port has been decommissioned and has been replaced by a new port at the coastal town of Diakofti, Kythira.

Most of the over 60 village names end with "-anika" and a few end with -athika, -iana and -ades. This is due to the villages being named after influential families that settled first in that region. For Example, 'Logothetianika' is derived from the Greek last name of 'Logothetis'.

The island in the past has been plagued by a poor infrastructure, exacerbated by the effect of weather on transportation during the winter months. However the construction of the new port in Diakofti along with the renovation of the island's airport have significantly reduced these effects. A new road from the island's most populated town of Potamos in the north to the island's capital of Chora in the south is currently in the planning and development stage.

Despite the fact that the island has been a trade route for centuries, construction of a modern port was postponed several times until the latter half of the 20th century. In 1933, efforts were made to construct a port in the village of Agia Pelagia, yet financial and governmental problems meant that decades later that one was built. That small port of Agia Pelagia (currently being renovated from a ferry dock to a tourist/recreational boat dock) was the island's main port until the mid-1990s. Around that time the new port of Diakofti, the site originally chosen by the island's British rulers in the 19th century, was constructed along with a modern wider road, aiming to support larger cargo and passenger vessels. The port of Diakofti currently serves scheduled routes to/from Gythion, Kalamata, Antikythera, Piraeus, Crete & Neapolis - Vatika. Proposals have been made to attach a Marina to the south side of the port, however no plans or timetables have been produced. Additionally, the harbour of Agia Patrikia (north of Agia Pelagia) is the primary fishing boat harbour, housing two wide boatramps and a boat repair facility.

The island's primary airport is the Alexander S. Onassis Airport also known as Kithira Island National Airport, located in the region between the village of Friligiannika and Diakofti, about 8 km (5 mi) from the capital. The airport was revamped and extended at the turn of the 21st century, largely by private funds provided by the local population. The island is served by Olympic Air flights.