From Infogalactic: the planetary knowledge core
(Redirected from LANXESS)
Jump to: navigation, search

LANXESS Aktiengesellschaft is a specialty chemicals group[2] based in Cologne, Germany. The group was founded in 2004 with the spin-off of the chemicals division and parts of the polymers segment from Bayer AG. The core business of LANXESS lies in the development, manufacturing and marketing of plastics, rubber, intermediates and specialty chemicals. LANXESS is listed in the leading sustainability indices Dow Jones Sustainability Index and FTSE4Good Index. LANXESS is the ninth largest chemicals group in Germany in terms of sales. Shares in LANXESS AG have been listed in Germany’s DAX from September 24, 2012 until September 21, 2015 and today in the midcap index MDAX.

The company’s roots date back to 1863, the year Bayer AG was founded. In November 2003, the Bayer Group decided to divest major sections of its chemical operations and around a third of its polymer business into an independent company as part of a major realignment.[3] LANXESS was founded with new internal structures on July 1, 2004. An extraordinary Bayer Stockholders’ Meeting was convened in Essen in November 2004. More than 99 percent of the capital represented at the meeting voted for the spin-off of LANXESS from Bayer.

All Bayer stockholders were given one LANXESS share for every 10 Bayer shares owned when the spin-off occurred.

The name LANXESS is a combination of the French word “lancer” (meaning to launch) with the English word “success.”

LANXESS faced difficult economic circumstances to begin with, but a four-phase corporate strategy managed to overcome these to steer it onto a steady course.

Phase 1: Rapid improvement of performance levels using short-term measures. The goal of this phase was to reduce internal costs and improve the company’s performance.

Phase 2: Targeted restructuring and realignment of low-margin and loss-making lines of business. The goal here was to return loss-making businesses to maximum possible profitability.

On November 2, 2005, LANXESS announced the spin-off of the fine chemicals business to Saltigo GmbH. The subsidiary has been an independent operation since April 2006. The Dorlastan business was sold to the Japanese company Asahi Kasei Fibers in 2006. ISL-Chemie from Kürten, which manufactures pigment preparations and specialty coatings, was sold for EUR 20 million to Berlac AG based in Sissach, Switzerland. The Paper business unit was bought by Finnish paper group Kemira in Helsinki for EUR 88 million in 2006. Also in 2006, LANXESS sold its Textile Processing Chemicals business unit (excluding North America) to the Dutch investor Egeria for EUR 54 million. The North American part of this business went to StarChem. The former technical services area was transformed into the wholly owned subsidiary Aliseca GmbH in 2007. LANXESS subsidiary Borchers GmbH, the additive specialist for coatings, emulsion paints and printing inks, was sold to the OM Group in the United States. In June of that year, LANXESS formed a joint venture between its subsidiary Lustran and British chemicals group Ineos Ltd. Then in September 2009, Ineos bought out LANXESS’s share. In 2014, LANXESS divested its wholly owned subsidiary Perlon-Monofil to the Serafin Group based in Munich, Germany.

Phase 4 of the restructuring measures concerned acquisitions. The group strengthened its activities in Asia and the emerging markets. LANXESS used carefully targeted investments and takeovers to successfully reestablish and reaffirm its presence in important business areas.

Then in December 2007, the group acquired the Brazilian chemicals group Petroflex S. A., a rubber manufacturer.

At the start of 2008, the group expanded its activities in the United States and took over the laboratories of the ICOS Corporation. On February 16, 2009, Petroflex was renamed LANXESS Elastômeros do Brasil S.A. The group expanded its Asian inorganic pigments business in June 2008 with the purchase of two production plants for iron oxide pigments from its Chinese cooperation partner Jinzhou Chemicals Company Ltd.

On March 10, 2009, LANXESS opened a sales company in Moscow to manage its business in Russia and other members of the Commonwealth of Independent States. On June 8, 2009, LANXESS acquired Indian company Gwalior Chemical Industries Ltd for EUR 82.4 million and also bought the business and production facilities of Jiangsu Polyols Chemical Co Ltd (China). In 2010, LANXESS strengthened its product portfolio by adding a product line from Clariant to its portfolio along with parts of the primary accelerator business from Flexsys.[4]

In mid-December 2010, LANXESS bought the DSM Elastomers business from Royal DSM N.V. in the Netherlands for EUR 310 million. The acquisition was completed on May 1, 2011.[5]

In 2011, the Rhein Chemie business unit purchased the Argentinian company Darmex S.A. and took over Wacker Chemie AG’s release agent business.[6] That same year, the group acquired the material protection business of Swiss company Syngenta with the goal of expanding its global biocides production network,[7] and it bought U.S. specialty chemicals group Verichem.[8] In addition, LANXESS strengthened its phthalate-free plasticizer portfolio in 2011 with the acquisition of Unitex Chemical Corporation in the United States.

In 2007, a development center for high-tech plastics was opened in Wuxi. During the same year, the group invested around EUR 30 million in a production facility for ion exchange resins for water treatment in the Gujarat region of India. [12]

In 2008, LANXESS invested approx. EUR 400 million in a synthetic rubber production facility in Singapore to serve the Asian markets. It was also in 2008 that construction started on a second facility for reducing emissions of harmful nitrous oxide in Krefeld-Uerdingen, which was taken into service in March 2009.

In 2010, LANXESS and the TSRC Corporation from Taiwan established a joint venture for the manufacture of technical rubber in the Greater China region. The most state-of-the-art facility in Asia for the production of ion exchange resins for water treatment was set up at the Jhagadia site in India.[9]

LANXESS also invested in the construction of a production facility for leather chemicals in Guangzhou, China.

In 2011, a production facility was opened for water treatment technology in Bitterfeld.[10] At the start of October 2011, the group announced extensive investments in Brazil to gain from the country’s booming automotive industry. The new projects included the construction of two facilities for plastics and rubber additives at Porto Feliz (in the state of São Paulo). One was earmarked for the production of the high-tech plastics Durethan and Pocan from mid-2013. The other established a production facility for the bladders used in the tire industry and rubber additives. The total investment amounted to EUR 30 million.[11] An iron oxide red pigments facility should be completed in Ningbo, China, by the end of 2015 as an expansion to the global production network for inorganic pigments.

In 2012, the site in Jhagadia, India, was expanded to incorporate three new production facilities.[12] At its site in Lipezk, LANXESS subsidiary Rhein Chemie manufactures rubber additives and release agents for the markets in Russia and the CIS, primarily for the automotive and tire industries. Construction work on this new plant commenced in spring 2012.[13] Construction work also commenced for the world’s largest EPDM rubber facility in China. The foundation stone for the world’s largest Nd-PBR facility was laid in Singapore.[14]

In 2013, a new leather chemicals facility was opened in Changzhou, China.[15] Rhein Chemie took a new plant into operation in Porto Feliz, Brazil. The butyl plant in Singapore also went into operation.[16] The expansion of cresol production at the Leverkusen site was completed and a newly established reaction system and second 46-meter-high distillation column were taken into operation. This expansion increased production capacity for the intermediate cresol for the global market by some 20 percent.[17]

In 2014, a new plant for high-tech plastics was opened in Porto Feliz, Brazil. The approx. EUR 20 million investment has generated a production capacity of around 20,000 metric tons per year.[18] The expansion of the production facility for Baypren polychloroprene solid rubber was completed at Dormagen.[19] The new polyamide plastics plant in Antwerp, Belgium, was also commissioned. This world-scale facility for polyamide plastics is designed for an annual production capacity of around 90,000 metric tons. The total investment for the project amounted to EUR 75 million. The main customers for these lightweight plastics are in the automotive industry.[20] A second production line was added to the high-tech plastics plant in Gastonia in the U.S. state of North Carolina.[21] The production network for iron oxide pigments was strengthened in China along with the expansion of the pigment plant in Ningbo and a mixing and milling plant.[22] The Liquid Purification Technologies business unit in Leverkusen expanded its production facility for weak acid cation exchange resins and at the same time opened a facility for the special filling and packaging of food application products.[23]

According to the voluntary disclosures contained in the EU lobby register, LANXESS paid between EUR 500,000 and EUR 600,000 during fiscal 2012 for direct lobbying of the EU bodies.Transparency Register / europa.eu

LANXESS was floated on the stock exchange on January 31, 2005. The stock’s first listing on the Frankfurt exchange was in the Prime Standard segment. Initially, it was listed in the DAX for just one day to enable the DAX stock index to be correctly computed, which therefore included 31 values that day for the first time in its history. The following day, Bayer AG’s weighting in the DAX was recalculated using the closing price of LANXESS stock. LANXESS was included in the MDAX in June 2005.

On September 5, 2012, the stock index working group of the Deutsche Börse AG decided to include LANXESS in the DAX, Germany’s leading share index. Since September 24, 2012, LANXESS has been listed alongside its former parent company Bayer in the DAX.[24] 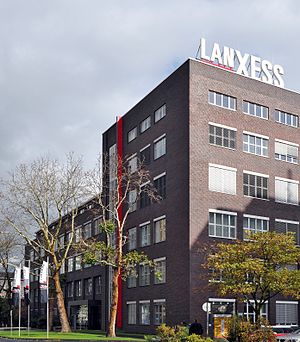 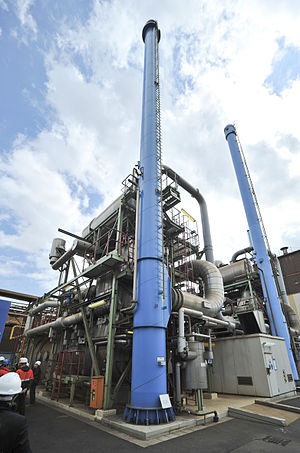 LANXESS has 52 production sites situated in 29 countries across all the world’s inhabited continents.[25]

In 2013, LANXESS had to reduce its profit targets considerably. One reason for this was the drop in sales of new automobiles in Europe. The share price, which had reached a high of EUR 68.99 in February, fell to EUR 43.03 in July 2013.

In January 2014, LANXESS announced the departure of Axel Heitmann. He was replaced by Matthias Zachert, previously a member of the management and the CFO of Merck KGaA, on April 1, 2014. On the DAX, news of Zachert’s appointment boosted LANXESS’s share price by over 8 percent, while Merck’s fell by around 10 percent. 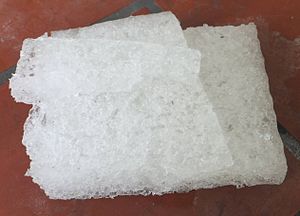 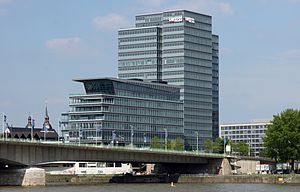 LANXESS considers its commitment to education one of the key aspects of its corporate policy. LANXESS needs well-trained and highly qualified staff to safeguard its growth. The company launched its educational initiative in 2008 with the goal of encouraging school pupils to get involved in shaping the future of the economy.[29] The endeavor also underlines LANXESS’s commitment to Germany, and especially North-Rhine Westphalia, as a center of economic and chemical prowess. For example, LANXESS aims to win children over to science and technology at company workshops and school project weeks, and with the aid of “Elementary school chemistry” experiment kits, in the hope of triggering their instinctive curiosity as early as possible.

The company also plays an active role in its local region. Under a 10-year contract signed by LANXESS and the operators of the venue, the Cologne arena has been known as the LANXESS Arena since June 2, 2008. In August 2008, LANXESS AG announced its plans to relocate the group headquarters from Leverkusen to Cologne. The move was initially scheduled for completion by 2011. However, in January 2009 it became clear that the economic and financial crisis would delay this venture. In May 2011, the company announced it would move its headquarters into the former Lufthansa tower block in the Deutz district of Cologne by the end of 2013. The “LANXESS Tower” was officially opened on September 3, 2013.