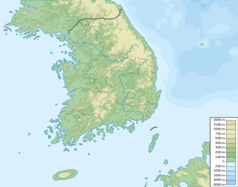 The LPGA KEB HanaBank Championship is a women's professional golf tournament in Incheon, South Korea, co-sanctioned by the LPGA of Korea Tour and the LPGA Tour.

Until 2013, it was a 54-hole event with a limited field of 78 players, approximately half of a full-field event. There was no cut; all players played all three rounds. However, the LPGA Tour imposes a points cut to the top 40 players (and ties) for purposes of championship points towards the CME Globe. In 2014, the event became a 72-hole event, and again only has a symbolic cut of 40 players at the end of the tournament for CME Globe purposes.

*Tournament was shortened to 36 holes in 2007 due to unplayable course conditions.