La Baule-Escoublac, commonly referred to as La Baule, is a commune in the Loire-Atlantique department in western France.

In 1779, a violent storm buried the village under sand. La Baule-Escoublac was rebuilt further inland. At that time, the very unstable dunes were occupied only by customs officers, who gave them the name of Bôle, a term indicating an easily flooded maritime meadow.

The birth of a seaside resort

It was only in 1879, when the Saint-Nazaire-Croisic railroad was conceived by Parisian industrialist Jules-Joseph Hennecart that the tourist potential of the coast was recognised.

Just before the inauguration of the line, Hennecart bought 40 ha of dunes for the Society of Escoublac Dunesachète (Société des dunes d'Escoublac) and commissioned local architect Georges Lafont to design the new town. Lafont designed a long sand promenade named Avenue de la Gare (today Avenue du Général-de-Gaulle) and a chapel (see picture).[1] After the railroad opened Lafont built more than 250 villas, taking the lead in the development of the seaside resort.

The rise of a seaside resort

In 1918, casino business magnate François André (see Groupe Lucien Barrière) set up the redesigning of the La Baule resort based on the Deauville model by combining casinos, luxury hotels and sports facilities all on one site.

In the 1920s, Parisian businessman Louis Lajarrige designed the very successful Bois d'Amour district at La Baule-les-Pins and formed an agreement with the railroad company to move the rails away from the seaside to ensure a direct access to the beach. On July 27, 1927 the new stations of La Baule-les-Pins and La Baule-Escoublac (see picture) were inaugurated while the old station was torn down to create a flower garden square. By that time, La Baule has become a very fashionable seaside resort.

During World War II La Baule formed part of the protective stretch of coast leading to the nearby harbour city of Saint-Nazaire, home of one of the biggest U-Boat stations the Germans ever built. It not only serviced the German submarine fleet, but was also the only dry dock on the Atlantic capable of housing the German battleship Tirpitz, one of two Bismarck-class ships built for the German Kriegsmarine during World War II.

La Baule and the surrounding areas were heavily occupied by the Germans throughout World War II. During the occupation a large number of Jewish residents and resistance members were deported to the concentration camps; in La Baule itself 32 Jewish men, women and children - the youngest of whom was 3 years old - were deported (with the assistance of the local French police) to Auschwitz where they all perished.[2] Although there is a memorial in the Parc de la Victoire in La Baule to 40 named war victims, there is no mention there or on any other memorial of the 32 Jewish deportees.

Such was the importance attached the area by the Germans that their troops kept fighting in La Baule and Saint-Nazaire for nine months longer than in the rest of the department, eventually surrendering on May 11, 1945 (3 days after the German unconditional surrender), making this one of the last liberated parts of France. This episode is called Poche de Saint-Nazaire from the French expression poche de resistance.

One of France's most exclusive seaside resorts during the first half of the 20th century, La Baule has become much more democratized since the 1960s. Today the resort mixes wealthy family villas, luxury hotels and seaside apartment buildings, creating an original and unique atmosphere of social diversity. The nearby region has long been an area of contact and conflict between Breton culture and that of the neighbouring Loire valley, and consequently is rich with historic places, castles (Nantes castle), walled cities (Guerande), not to mention 19th century seaside resorts, such as Quiberon, and many typical Breton fishing villages (Pornichet).

The bay is regarded as "the most beautiful in Europe".[who?] Furthermore, La Baule is near La côte d'amour, which features beautiful cliffs and amazing views of the Atlantic ocean.

The commune of Escoublac has achieved a new vitality with the restoration of its civic center and the installation of many attractions. 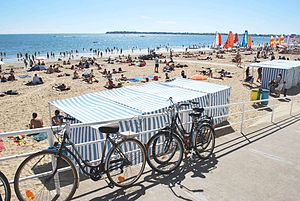 La Baule-Escoublac is twinned with: