Mehdya, also Mehdia or Mehedya, is a town in Kénitra Province, Gharb-Chrarda-Béni Hssen, Morocco. According to the 2004 census it has a population of 16,262.[1] It is located on Sebou River (Oued Sebu).

Mehdya was previously called Al-Ma'mura ("the well-populated") or La Mamora in Europe, and was a harbour on the coast of Morocco. It seems to have been occupied by the Carthaginians since the 5th century BCE.[2]

It was captured by the Portuguese in 1515, and renamed São João da Mamora. Altogether, the Portuguese are documented to have seized 6 Moroccan towns, and built 6 stand-alone fortresses on the Moroccan Atlantic coast, between the river Loukos in the north and the river of Sous in the south. Four of the stand-alone fortresses only had a short duration: Graciosa (1489), Forte de São João de Mamora (pt) (1515), Castelo Real of Mogador (1506–10) and Aguz (1520–25). Two of them were to become permanent urban settlements: Santa Cruz do Cabo de Gué (Agadir, founded in 1505-06), and Mazagan founded in 1514-17. The Portuguese had to abandon most of their settlements between 1541 and 1550, although they were able to keep Ceuta, Tangier and Mazagan.[3] 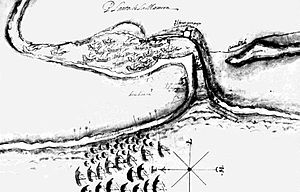 La Mamora harbour under the Spanish. 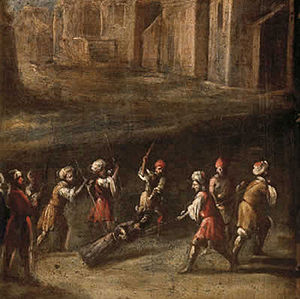 The Christ of Medinaceli, looted in La Mamora (Medhya), being pulled through the streets of Meknes, by Juan de Valdés Leal, 1681.

Mehdya, known as La Mamora, was under Spanish rule between 1614 and 1681.[4] After capturing Larache in 1610, the Spanish then captured Al-Ma'mura during the reign of Mulay Zidan in August 1614, due to the period of anarchy that followed the death of Mulay al-Mansur in 1603.[5] After negotiations with Mulay Zidan, they left a strong garrison of 1,500 men, and called the harbour San Miguel de Ultramar.[2]

The warlord Sidi al-Ayachi led a counter-offensive against Spain, privateering against its shipping, and obtaining the help of the Moriscos and the English.[5][6] About 1627, he managed to temporarily capture Al-Ma'mura, and add it to his Republic of Salé.[5]

The Spanish retained the city for 67 years, when it was conquered by the Alaouite ruler Moulay Ismaïl.[2][4] According to tradition, the Bishop of Cadiz had commissioned a statue of Jesus Christ for the church at La Mamora, which was in his diocese. When the Moroccans reoccupied the town in 1681 they took the statue as loot, and later received a ransom from the Spanish for the return of the statue, which was taken to Madrid where it is nowadays venerated under the name of Cristo de Medinaceli.[7]

The new Sultan Mulay Ismail took the city by storm in 1681, and renamed the city al-Mahdiya.[2]

In 1795, Mulay Slimane closed the harbour of Mehdya to avoid foreign incursions.

About 9,000 Allied troops, carried by 19 warships, were landed in Mehdya during Operation Torch in 1942.