From Infogalactic: the planetary knowledge core
Jump to: navigation, search
This article is about the opera house. For other uses, see Scala (disambiguation). 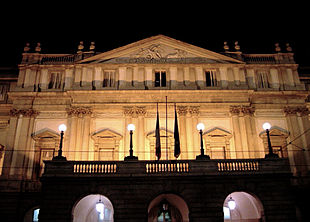 The Teatro alla Scala in Milan, by night

La Scala's season traditionally opens on 7 December, Saint Ambrose's Day, the feast day of Milan's patron saint. All performances must end before midnight, and long operas start earlier in the evening when necessary.

The Museo Teatrale alla Scala (La Scala Theatre Museum), accessible from the theatre's foyer and a part of the house, contains a collection of paintings, drafts, statues, costumes, and other documents regarding La Scala's and opera history in general. La Scala also hosts the Accademia d'Arti e Mestieri dello Spettacolo (Academy for the Performing Arts). Its goal is to train a new generation of young musicians, technical staff, and dancers (at the Scuola di Ballo del Teatro alla Scala, one of the Academy's divisions). 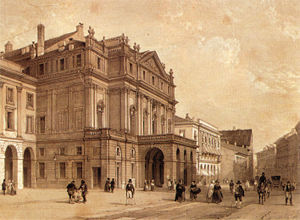 A nineteenth-century depiction of the Teatro alla Scala

A fire destroyed the previous theatre, the Teatro Regio Ducale, on 25 February 1776, after a carnival gala. A group of ninety wealthy Milanese, who owned palchi (private boxes) in the theatre, wrote to Archduke Ferdinand of Austria-Este asking for a new theatre and a provisional one to be used while completing the new one. The neoclassical architect Giuseppe Piermarini produced an initial design but it was rejected by Count Firmian (the governor of the then Austrian Lombardy).

A second plan was accepted in 1776 by Empress Maria Theresa. The new theatre was built on the former location of the church of Santa Maria alla Scala, from which the theatre gets its name. The church was deconsecrated and demolished, and over a period of two years the theatre was completed by Pietro Marliani, Pietro Nosetti and Antonio and Giuseppe Fe. The theatre had a total of "3,000 or so" seats[1] organized into 678 pit-stalls, arranged in six tiers of boxes above which is the 'loggione' or two galleries. Its stage is one of the largest in Italy (16.15m d x 20.4m w x 26m h).

Building expenses were covered by the sale of palchi, which were lavishly decorated by their owners, impressing observers such as Stendhal. La Scala (as it came to be known) soon became the preeminent meeting place for noble and wealthy Milanese people. In the tradition of the times, the platea (the main floor) had no chairs and spectators watched the shows standing up. The orchestra was in full sight, as the golfo mistico (orchestra pit) had not yet been built.

Above the boxes, La Scala has a gallery—called the loggione—where the less wealthy can watch the performances. The gallery is typically crowded with the most critical opera aficionados, known as the loggionisti, who can be ecstatic or merciless towards singers' perceived successes or failures. For their failures, artists receive a "baptism of fire" from these aficionados, and fiascos are long remembered an example being when, in 2006, tenor Roberto Alagna was booed off the stage during a performance of Aida this forced his understudy, Antonello Palombi, to quickly replace him mid-scene without time to change into a costume.

As with most of the theatres at that time, La Scala was also a casino, with gamblers sitting in the foyer.[2] Conditions in the auditorium, too, could be frustrating for the opera lover, as Mary Shelley discovered in September 1840:

At the Opera they were giving Otto Nicolai's Templario. Unfortunately, as is well known, the theatre of La Scala serves, not only as the universal drawing-room for all the society of Milan, but every sort of trading transaction, from horse-dealing to stock-jobbing, is carried on in the pit; so that brief and far between are the snatches of melody one can catch.[3]

La Scala was originally illuminated with 84 oil lamps mounted on the palcoscenico and another thousand in the rest of theatre. To prevent the risks of fire, several rooms were filled with hundreds of water buckets. In time, oil lamps were replaced by gas lamps, these in turn were replaced by electric lights in 1883. 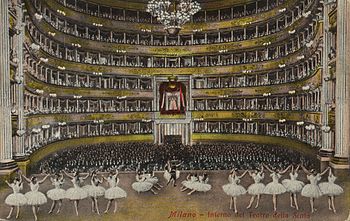 Interior of the opera house in 1900

The original structure was renovated in 1907, when it was given its current layout with 1,987 seats. In 1943, during WWII, La Scala was severely damaged by bombing. It was rebuilt and reopened on 11 May 1946, with a memorable concert conducted by Arturo Toscanini—twice La Scala's principal conductor and an associate of the composers Giuseppe Verdi and Giacomo Puccini—with a soprano solo by Renata Tebaldi, which created a sensation.

La Scala hosted the prima (first production) of many famous operas, and had a special relationship with Verdi. For several years, however, Verdi did not allow his work to be played here, as some of his music had been modified (he said "corrupted") by the orchestra. This dispute originated in a disagreement over the production of his Giovanna d'Arco in 1845; however the composer later conducted his Requiem there on 25 May 1874 and he announced in 1886 that La Scala would host the premiere of what was to become his penultimate opera, Otello.[4] The premiere of his last opera, Falstaff was also given in the theatre.

In 1982, the Filarmonica della Scala was established, drawing its members from the larger pool of musicians that comprise the Orchestra della Scala.

The theatre underwent a major renovation from early 2002 to late 2004. The theatre was closed following the traditional 7 December 2001 season opening performances of Otello, which ran through December. From 19 January 2002 to November 2004, the opera company was transferred to the new Teatro degli Arcimboldi, built in the Pirelli-Bicocca industrial area 4.5 miles from the city centre.

The renovation by renowned architect Mario Botta proved controversial, as preservationists feared that historic details would be lost. However, the opera company was said to be impressed with improvements to the structure and the sound quality, which was enhanced when the heavy red carpets in the hall were removed. The stage was entirely re-constructed, and an enlarged backstage allows more sets to be stored, permitting more productions.

Seats now include monitors for the electronic libretto system provided by Radio Marconi, an Italian company, allowing audiences to follow opera libretti in English and Italian in addition to the original language.

The opera house re-opened on 7 December 2004 with a production, conducted by Riccardo Muti, of Salieri's Europa riconosciuta, the opera that was performed at La Scala's inauguration in 1778.[5] Tickets for the re-opening fetched up to €2,000.[6]

The renovations cost a reported €61 million, and left a budget shortfall that the opera house overcame in 2006.[6] 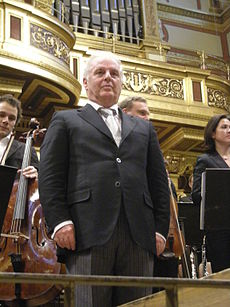 Carlo Fontana, the general manager of La Scala since 1990, was dismissed in February 2005 by the board of governors over differences with the music director, Riccardo Muti. The resulting staff backlash caused serious disruptions and staff strikes. In a statement, the theatre's board said it was "urgent to unify the theatre's management." On 16 March 2005, the La Scala orchestra and other staff voted overwhelmingly in no confidence motion against Muti, and demanded the resignation of Fontana's replacement, Mauro Meli. Muti had already been forced to cancel a concert a few days earlier because of the disagreements. Italy's culture minister, Giuliano Urbani, supported the conductor but called for urgent action by management to safeguard the smooth operation and prestige of La Scala. On 2 April 2005, Muti resigned from La Scala, citing "hostility" from staff members.

In May 2005, Stéphane Lissner, formerly with the Aix-en-Provence Festival, was appointed as General Manager and Artistic Director of La Scala, becoming the first non-Italian in its history to hold the office. On 15 May 2006, Daniel Barenboim was named Maestro Scaligero, or de facto principal guest conductor, of the company. In October 2011, Barenboim was appointed the next music director of La Scala, effective December 2011, with an initial contract of 5 years.[7]

In December 2013, Riccardo Chailly was appointed the next music director of La Scala, effective 1 January 2015.[8]