From Infogalactic: the planetary knowledge core
Jump to: navigation, search
For the municipality in Neuchâtel for which the culture is named, see La Tène, Neuchâtel. 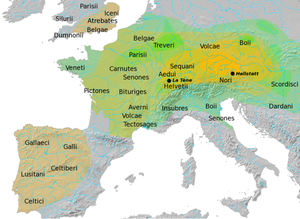 Overview of the Hallstatt and La Tène cultures. The core Hallstatt territory (800 BC) is shown in solid yellow, the area of influence by 500 BC (HaD) in light yellow. The core territory of the La Tène culture (450 BC) is shown in solid green, the eventual area of La Tène influence by 50 BC in light green. The territories of some major Celtic tribes are labelled. Map drawn after Atlas of the Celtic World, by John Haywood (2001: 30–37).

Reconstruction of a late La Tène period (1st century BC) settlement in Altburg near Bundenbach. 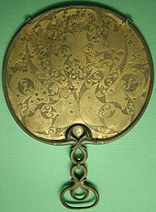 A 1st-century BC mirror found in Desborough, Northants, showing the spiral and trumpet theme. 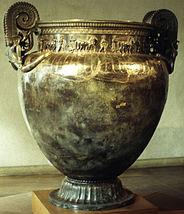 The La Tène culture (/ləˈtɛn/; French pronunciation: ​[la tɛn]) was a European Iron Age culture named after the archaeological site of La Tène on the north side of Lake Neuchâtel in Switzerland, where a rich cache of artifacts was discovered by Hansli Kopp in 1857.

La Tène culture developed and flourished during the late Iron Age (from 450 BC to the Roman conquest in the 1st century BC) in Belgium, eastern France, Switzerland, Austria, Southern Germany, the Czech Republic, Poland, Slovakia, Slovenia, Hungary and Romania. To the north extended the contemporary Jastorf culture of Northern Germany.[1]

La Tène culture developed out of the early Iron Age Hallstatt culture without any definite cultural break, under the impetus of considerable Mediterranean influence from the Culture of Golasecca,[2] the Greeks in pre-Roman Gaul and the Etruscans.[3] Barry Cunliffe notes localization of La Tène culture during the 5th century when there arose "two zones of power and innovation: a Marne – Moselle zone in the west with trading links to the Po Valley via the central Alpine passes and the Golasecca culture, and a Bohemian zone in the east with separate links to the Adriatic via the eastern Alpine routes and the Venetic culture".[4] A shift of settlement centres took place in the 4th century.

La Tène cultural material appeared over a large area, including parts of Ireland and Great Britain, northern Spain, northern-central Italy,[5] Burgundy, and Austria. Elaborate burials also reveal a wide network of trade. In Vix, France, an elite woman of the 6th century BC was buried with a very large bronze cauldron made in Greece. Exports from La Tène cultural areas to the Mediterranean cultures were based on salt, tin and copper, amber, wool and leather, furs and gold.

Though there is no agreement on the precise region in which La Tène culture first developed, there is a broad consensus that the center of the culture lay on the northwest edges of Hallstatt culture, north of the Alps, within the region between the valleys of the Marne and Moselle in the west and modern Bavaria and Austria in the east. In 1994 a prototypical ensemble of elite grave sites of the early 5th century BC was excavated at Glauberg in Hesse, northeast of Frankfurt-am-Main, in a region that had formerly been considered peripheral to the La Tène sphere.[6]

From their homeland, La Tène groups expanded in the 4th century to Hispania, Italy, the Balkans, and even as far as Asia Minor, in the course of several major migrations. In the 4th century BC, a Gallic army led by Brennus reached Rome and took the city. In the 3rd century BC, Gallic bands entered Greece and threatened the oracle of Delphi, while another band settled Galatia in Asia Minor.

As with many archaeological periods, La Tène history was originally divided into "early" (6th century BC), "middle" (c. 450–100 BC), and "late" (1st century BC) stages, with the Roman occupation effectively driving the culture underground and ending its development. A broad cultural unity was not paralleled by overarching social-political unifying structures, and the extent to which the material culture can be linguistically linked is debated.

Our knowledge of this cultural area derives from three sources: from archaeological evidence, from Greek and Latin literary evidence, and more controversially, from ethnographical evidence suggesting some La Tène artistic and cultural survivals in traditionally Celtic regions of far western Europe. Some of the societies that are archaeologically identified with La Tène material culture were identified by Greek and Roman authors from the 5th century onwards as Keltoi ("Celts") and Galli ("Gauls"). Herodotus (iv.49) correctly placed Keltoi at the source of the Ister/Danube, in the heartland of La Tène material culture: "The Ister flows right across Europe, rising in the country of the Celts", whom however, apparently misunderstanding his source,[7] he places "farthest to the west of any people of Europe"[8]

Whether the usage of classical sources means that the whole of La Tène culture can be attributed to a unified Celtic people is difficult to assess; archaeologists have repeatedly concluded that language, material culture, and political affiliation do not necessarily run parallel. Frey notes (Frey 2004) that in the 5th century, "burial customs in the Celtic world were not uniform; rather, localised groups had their own beliefs, which, in consequence, also gave rise to distinct artistic expressions".

La Tène metalwork in bronze, iron and gold, developing technologically out of Hallstatt culture, is stylistically characterized by inscribed and inlaid intricate spirals and interlace, on fine bronze vessels, helmets and shields, horse trappings and elite jewelry, especially the neck rings called torcs and elaborate clasps called fibulae. It is characterized by elegant, stylized curvilinear animal and vegetal forms, allied with the Hallstatt traditions of geometric patterning. The Early Style of La Tène art and culture mainly featured static, geometric decoration, while the transition to the Developed Style constituted a shift to movement-based forms, such as triskeles. Some subsets within the Developed Style contain more specific design trends, such as the recurrent serpentine scroll of the Waldalgesheim Style [9]

Initially La Tène folk lived in open settlements that were dominated by the chieftains’ towering hill forts.[10] The development of towns—oppida—appears in mid-La Tène culture. La Tène dwellings were carpenter-built rather than of masonry. La Tène peoples also dug ritual shafts, in which votive offerings and even human sacrifices were cast. Severed heads appear to have held great power and were often represented in carvings. Burial sites included weapons, carts, and both elite and household goods, evoking a strong continuity with an afterlife.

La Tène is a village on the northern shore of Lake Neuchâtel, Switzerland. It is both an archaeological site and the eponymous site for the late Iron Age La Tène culture, also spelt "Latène" or "La-Tène".

In 1857, prolonged drought lowered the waters of the lake by about 2 m. On the northernmost tip of the lake, between the river Thielle and a point south of the village of Marin-Epagnier, Hansli Kopp, looking for antiquities for Colonel Frédéric Schwab, discovered several rows of wooden piles that still reached about 50 cm into the water. From among these, Kopp collected about forty iron swords.

The Swiss archaeologist Ferdinand Keller published his findings in 1868 in his influential first report on the Swiss pile dwellings (Pfahlbaubericht). In 1863 he interpreted the remains as a Celtic village built on piles. Eduard Desor, a geologist from Neuchâtel, started excavations on the lakeshore soon afterwards. He interpreted the site as an armory, erected on piles over the lake and later destroyed by enemy action. Another interpretation accounting for the presence of cast iron swords that had not been sharpened, was of a site of sacrifices.

With the first systematic lowering of the Swiss lakes from 1868 to 1883, the site fell completely dry. In 1880, Emile Vouga, a teacher from Marin-Epagnier, uncovered the wooden remains of two bridges (designated "Pont Desor" and "Pont Vouga") originally over 100 m long, that crossed the little Thielle River (today a nature reserve) and the remains of five houses on the shore. After Vouga had finished, F. Borel, curator of the Marin museum, began to excavate as well. In 1885 the canton asked the Société d'Histoire of Neuchâtel to continue the excavations, the results of which were published by Vouga in the same year.

All in all, over 2500 objects, mainly made from metal, have been excavated in La Tène. Weapons predominate, there being 166 swords (most without traces of wear), 270 lanceheads, and 22 shield bosses, along with 385 brooches, tools, and parts of chariots. Numerous human and animal bones were found as well.

Interpretations of the site vary. Some scholars believe the bridge was destroyed by high water, while others see it as a place of sacrifice after a successful battle (there are almost no female ornaments).

An exhibition marking the 150th anniversary of the discovery of the La Tène site was launched in June 2007 at the Musée Schwab in Bienne, Switzerland. It was scheduled to move to Zürich in 2008 and the Mont Beuvray in Burgundy in 2009.

Some outstanding La Tène artifacts are: