From Infogalactic: the planetary knowledge core
Jump to: navigation, search
This article is about Labour Day observances in different countries. For the workers' holiday held on 1 May, see International Workers' Day. For the 2013 American film, see Labor Day (film).

Labour Day (Labor Day in the United States) is an annual holiday to celebrate the achievements of workers. Labour Day has its origins in the labour union movement, specifically the eight-hour day movement, which advocated eight hours for work, eight hours for recreation, and eight hours for rest. For many countries, Labour Day is synonymous with, or linked with, International Workers' Day, which occurs on 1 May. For other countries, Labour Day is celebrated on a different date, often one with special significance for the labour movement in that country. In Canada and the United States, it is celebrated on the first Monday of September and considered the official end of the summer holiday for most of the respective countries, as public school and university students return to school around that day.

The first march for an eight-hour day by the labour movement occurred in Melbourne on 21 April 1856.[2] On this day stonemasons and building workers on building sites around Melbourne stopped work and marched from the University of Melbourne to Parliament House to achieve an eight-hour day. Their direct action protest was a success, and they are noted as being among the first organised workers in the world to achieve an 8-hour day, with no loss of pay.[3]

Bangladesh Garment Sramik Sanghati, an organization working for the welfare of garment workers, has requested that 24 April be declared Labour Safety Day in Bangladesh, in memory of the victims of the Rana Plaza building collapse.[4][5]

Labour Day is a national holiday in the Bahamas, celebrated on the first Friday in June in order to create a long weekend for workers.[6] The traditional date of Labour Day in the Bahamas, however, is 7 June, in commemoration of a significant workers' strike that began on that day in 1942. Labour Day is meant to honor and celebrate workers and the importance of their contributions to the nation and society. In the capital city, Nassau, thousands of people come to watch a parade through the streets, which begins at mid-morning. Bands in colorful uniforms, traditional African junkanoo performers, and members of various labour unions and political parties are all part of the procession, which ends up at the Southern Recreation Grounds, where government officials make speeches for the occasion. For many residents and visitors to the Bahamas, the afternoon of Labour Day is a time to relax at home or perhaps visit the beach. 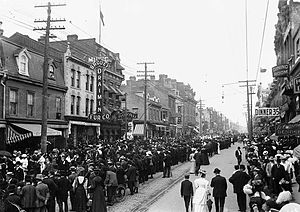 A Labour Day parade in Toronto, Canada in 1900

Labour Day (French: Fête du Travail) has been celebrated on the first Monday in September in Canada since the 1880s. The origins of Labour Day in Canada can be traced back to December 1872 when a parade was staged in support of the Toronto Typographical Union's strike for a 58-hour work-week.[7] The Toronto Trades Assembly (TTA) called its 27 unions to demonstrate in support of the Typographical Union who had been on strike since 25 March.[7] George Brown, Canadian politician and editor of the Toronto Globe hit back at his striking employees, pressing police to charge the Typographical Union with "conspiracy."[7] Although the laws criminalising union activity were outdated and had already been abolished in Great Britain, they were still on the books in Canada and police arrested 24 leaders of the Typographical Union. Labour leaders decided to call another similar demonstration on 3 September to protest the arrests. Seven unions marched in Ottawa, prompting a promise by Canadian Prime Minister Sir John A. Macdonald to repeal the "barbarous" anti-union laws.[7] Parliament passed the Trade Union Act on 14 June the following year, and soon all unions were seeking a 54-hour work-week.

The Toronto Trades and Labour Council (successor to the TTA) held similar celebrations every spring. American Peter J. McGuire, co-founder of the American Federation of Labor, was asked to speak at a labour festival in Toronto, Canada on 22 July 1882. Returning to the United States, McGuire and the Knights of Labor organised a similar parade based on the Canadian event on 5 September 1882 in New York City, USA. On 23 July 1894, Canadian Prime Minister John Thompson and his government made Labour Day, to be held in September, an official holiday. In the United States, the New York parade became an annual event that year, and in 1894 was adopted by American president Grover Cleveland to compete with International Workers' Day (May Day).

While Labour Day parades and picnics are organised by unions, many Canadians regard Labour Day as the Monday of the last long weekend of summer. Non-union celebrations include picnics, fireworks displays, water activities, and public art events. Since the new school year generally starts right after Labour Day, families with school-age children take it as the last chance to travel before the end of summer.

An old fashioned tradition in Canada and the United States frowns upon the wearing of white after Labour Day. Explanations for this tradition vary; the most common is that white is a summer colour and Labour Day unofficially marks the end of summer. The rule may have been intended as a status symbol for new members of the upper and middle classes in the late 19th and early 20th century.[7][not in citation given][8]

A Labour Day tradition in Atlantic Canada is the Wharf Rat Rally in Digby, Nova Scotia, while the rest of Canada watches the Labour Day Classic, a Canadian Football League event where rivals like Calgary Stampeders and Edmonton Eskimos, Hamilton Tiger-Cats and Toronto Argonauts (except in 2011 and 2013, due to scheduling conflicts), and Saskatchewan Roughriders and Winnipeg Blue Bombers play on Labour Day weekend. Before the demise of the Ottawa Renegades after the 2005 season, that team played the nearby Montreal Alouettes on Labour Day weekend. Starting in 2014, when the Ottawa Redblacks begin play, the Montreal–Ottawa Labour Day tradition will be revived. Likewise, Ontario University Athletics has a long-established tradition to play university football on Labour Day.

The Labour Day parade in Grand Falls-Windsor, Newfoundland started in 1921 and still continues today, over 90 years later. The celebrations go on for three days with a parade on Labour Day Monday.

Before 1961, 24 May was celebrated in Jamaica as Empire Day in honour of the birthday of Queen Victoria and her emancipation of slaves in Jamaica.[9] As its name suggests, the day was used to celebrate the British Empire, complete with flag-raising ceremonies and the singing of patriotic songs. In 1961, Jamaican Chief Minister Norman Washington Manley proposed the replacement of Empire Day with Labour Day, a celebration in commemoration of 23 May 1938, when Alexander Bustamante led a labour rebellion leading to Jamaican independence.

Until 23 May 1971, Jamaican Prime Minister Michael Manley promoted Labour Day as a showcase for the importance of labour to the development of Jamaica, and a day of voluntary community participation to beneficial projects.[9] Since then, Labour Day has been not only a public holiday but also a day of mass community involvement around the country.

In New Zealand, Labour Day is a public holiday held on the fourth Monday in October. Its origins are traced back to the eight-hour working day movement that arose in the newly founded Wellington colony in 1840, primarily because of carpenter Samuel Parnell's refusal to work more than eight hours a day. He encouraged other tradesmen also to work for only eight hours a day and in October 1840, a workers' meeting passed a resolution supporting the idea. On 28 October 1890, the 50th anniversary of the eight-hour day was commemorated with a parade. The event was then celebrated annually in late October as either Labour Day or Eight-Hour Demonstration Day. In 1899 government legislated that the day be a public holiday from 1900. The day was celebrated on different days in different provinces. This led to ship owners complaining that seamen were taking excessive holidays by having one Labour Day in one port then another in their next port. In 1910 the government stipulated that the holiday would be observed on the same day throughout the nation.

In Trinidad and Tobago, Labour Day is celebrated every 19 June. This holiday was proposed in 1973[10] to be commemorated on the anniversary of the 1937 Butler labour riots. 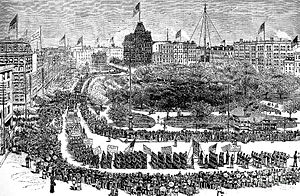 In the United States, Labor Day is a federal holiday observed on the first Monday of September. It is customarily viewed as the end of the summer vacation season.[11] Many schools open for the year on the day after Labor Day.[12] The holiday is shared with Canada, where it is known as Labour Day.