From Infogalactic: the planetary knowledge core
Jump to: navigation, search
File:Margaret Beckett May 2007.jpg
Margaret Beckett was a candidate and defeated incumbent of Deputy Leader of the Labour Party 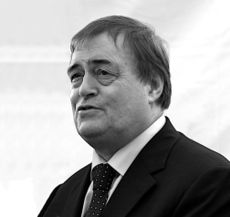 A deputy leadership election for the Labour Party in the United Kingdom took place in 1994, after the sudden death of incumbent leader John Smith. Margaret Beckett was the serving Deputy Leader of the Labour Party, having been elected in 1992, and following Smith's death became the acting leader.

Elections were held concurrently for both Leader and Deputy Leader of the Party, with the results announced on 21 July 1994. There were three candidates for Leader: Margaret Beckett, Tony Blair and John Prescott, but out of these three, only Blair did not simultaneously stand for Deputy Leader. Blair went on to win the leadership election, and Prescott won the deputy leadership. Both Prescott and Beckett held roles in Blair's cabinet for his entire time in office.

The election was conducted using the Labour Party's new "electoral college" which gave a third of the votes to the party's MPs and MEPs, a third to its rank and file members (the CLP) and the final third to affiliated trade unions and societies, such as the Fabians.

How each MP voted