Tel Lachish (Hebrew: תל לכיש‎; Greek: Λαχις; Latin: Tel Lachis), also Tell ed-Duweir, is the site of an ancient Near East city, now an archaeological site and an Israeli national park. Lachish is located in the Shephelah region of Israel between Mount Hebron and the Mediterranean coast. It is first mentioned in the Amarna letters as Lakisha-Lakiša (EA 287, 288, 328, 329, 335). According to the Bible, the Israelites captured and destroyed Lachish for joining the league against the Gibeonites (Joshua 10:31-33). The territory was later assigned to the tribe of Judah (15:39) and became part of the Kingdom of Israel.

Of the cities in ancient Judah, Lachish was second in importance only to Jerusalem.[1] One of the Lachish letters warns of the impending Babylonian destruction. It reads: "Let my lord know that we are watching over the beacon of Lachish, according to the signals which my lord gave, for Azekah is not seen." According to the prophet Jeremiah, Lachish and Azekah were the last two Judean cities before the conquest of Jerusalem (Jer. 34:7). This pottery inscription can be seen at the Israel Museum in Jerusalem.[2] 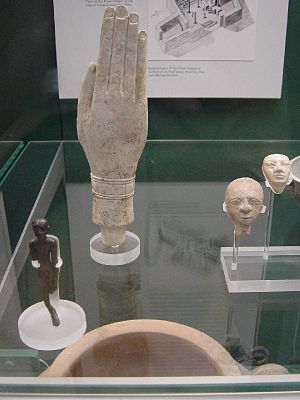 Bronze Age ivory hand and other objects found at the Fosse temple at Lachish (British Museum). 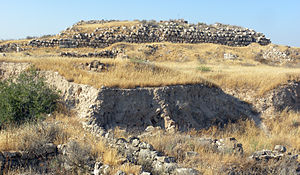 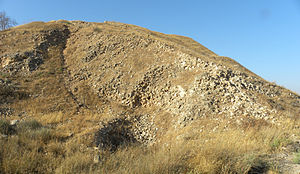 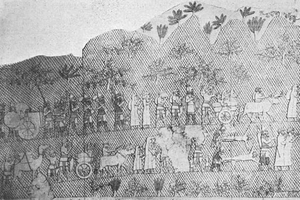 Judean captives being led away into slavery by the Assyrians after the siege of Lachish in 701 B.C. This relief is important for the knowledge of Judean dress.

Occupation at the site of Lachish began during the Pottery Neolithic period (5500–4500 BCE). Major development began in the Early Bronze Age (3300–3000 BCE).[1] During the Middle Bronze II (2000–1650 BCE), the Canaanite settlement came under strong Egyptian influence. The next peak was the late Late Bronze Age (1650–1200 BCE), when Lachish is mentioned in the Amarna letters. This phase of the city was destroyed in a fire ca. 1150 BCE. The city, under protection of the New Kingdom of Egypt, was rebuilt by the Caananites. One of the two discovered temples was built at the northwest corner of the mound, outside the city limits and within the disused moat, which led the archaeologists to call it the Fosse Temple. However, this settlement was soon destroyed by another fire, perhaps from an invasion by the Sea Peoples or Israelites. The mound was abandoned for two centuries.[1]

Rebuilding of the city began in the Early Iron Age during the 10th and 9th centuries BCE when it was settled by the Israelites. The unfortified settlement may have been destroyed c. 925 BCE by Egyptian Pharaoh Sheshonk I.[1] In the first half of the 9th century BCE, under the kings Asa and Jehoshaphat, Lachish became an important city in the kingdom of Judah. It was heavily fortified with massive walls and ramparts and a royal palace was built on a platform in the center of the city.[1] Lachish was the foremost among several fortified cities and strongholds guarding the valleys that lead up to Jerusalem and the interior of the country against enemies which usually approached from the coast. 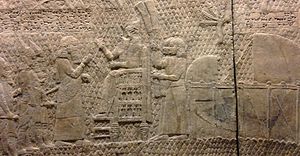 The single inscription which identifies the location depicted in the reliefs reads: "Sennacherib, the mighty king, king of the country of Assyria, sitting on the throne of judgment, before (or at the entrance of) the city of Lachish (Lakhisha). I give permission for its slaughter"

In 701 BCE, during the revolt of king Hezekiah against Assyria, it was besieged and captured by Sennacherib despite the defenders' determined resistance.[3] Some scholars believe that the fall of Lachish actually occurred during a second campaign in the area by Sennacherib ca. 688 BCE.[citation needed] The site now contains the only remains of an Assyrian siege ramp discovered so far. Sennacherib later devoted a whole room in his "Palace without a rival", the South-west palace in Nineveh, for artistic representations of the siege on large alabaster slabs, most of which are now on display in the British Museum. They hold depictions of Assyrian siege ramps, battering rams, sappers, and other siege machines and army units, along with Lachish's architecture and its final surrender. In combination with the archaeological finds, they give a good understanding of siege warfare of the period.[4] So much attention was given to the success at Lachish also because, unlike it, Jerusalem managed to withstand Sennacherib's onslaught.

The town was rebuilt in the late 7th century BCE during the decline of the Neo-Assyrian Empire. However, the city fell to Nebuchadnezzar in his campaign against Judah in 586 BCE.

Modern excavation of the site has revealed that the Assyrians built a stone and dirt ramp up to the level of the Lachish city wall, thereby allowing the soldiers to charge up the ramp and storm the city. Excavations revealed approximately 1,500 skulls in one of the caves near the site, and hundreds of arrowheads on the ramp and at the top of the city wall, indicating the ferocity of the battle. The city occupied an area of 8 hectares (20 acres) and was finally destroyed in 587 BCE.[5] Residents were exiled as part of the Babylonian captivity.[1]

During Babylonian occupation, a large residence was built on the platform that had once supported the Israeli palace. At the end of the captivity, some exiled Jews returned to Lachish and built a new city with fortifications. Under the Babylonian or Achaemenid Empire, a large altar (known as the Solar Shrine) on the east section of the mound was built. The shrine was abandoned after the area fell in the hands of Alexander the Great. The tell has been unoccupied since then.[1]

Lachish is mentioned in several books in the Hebrew Bible. The Book of Joshua refers to Lachish in chapter 10 (verses 3, 5, 23, and 31-35), describing the Israelite conquest of Caanan. Japhia, the King of Lachish, is listed as one of the Five Amorite Kings that allied to repel the invasion. After a surprise attack from the Israelites, the kings took refuge in a cave, where they were captured and put to death. Joshua and the Israelites then took the city of Lachish after a two-day siege, exterminating the populace. In 12:11, the King of Lachish is mentioned as one of the thirty-one kings conquered by Joshua. The city is assigned to the Tribe of Judah in 15:39 as part of the western foothills.

Rehoboam's fortifications of Lachish are recorded in II Chronicles (11:9). In II Kings (14:17) and II Chronicles 25:27, Amaziah of Judah flees to Lachish after he was defeated by Jehoash of Israel, where he is captured and executed.

The Book of Micah (1:13) warns the residents of Lachish that the destruction of Samaria by the Assyrians will soon spread to Judah. Chapter 18, verse 14 of II Kings mentions the Siege of Lachish; Hezekiah sends a message there offering tribute to Sennacherib in exchange for the city. In verse 17, the Assyrians leave Lachish and head to Jerusalem to begin the unsuccessful Assyrian Siege of Jerusalem. This is also mentioned in II Chronicles 32:9 and Isaiah 36:2. The Israelites learn of the departure of the Assyrians from Lachish in II Kings 19:8 and Isaiah 37:8.

The Book of Jeremiah (34:7) lists Lachish as one of the last three fortified cities in Judah to fall to the Babylonian king Nebuchadnezzar II. In the Book of Nehemiah (11:30) Lachish is mentioned as an area where the people of Judah settled during the time of the Achaemenid Empire.

During the 19th and early 20th centuries, Lachish was identified with Tell el-Hesi from a cuneiform tablet found there (EA 333). The tablet is a letter from an Egyptian official named Paapu, reporting cases of treachery involving a local kinglet, Zimredda. However this hypothesis is no longer accepted. [6] More recent excavations have identified Tell ed-Duweir as Lachish. 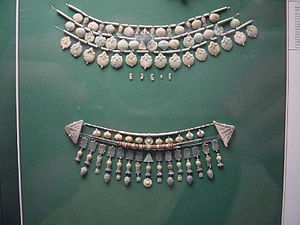 The site of Tell ed-Duweir was first excavated in 4 seasons between 1932 and 1938 by the Wellcome-Marston Archaeological Research Expedition. The work was led initially by James Leslie Starkey until he was murdered by Arab bandits. The effort was completed by Olga Tufnell; publication, identifying seven occupation levels, was completed in 1958.[7][8][9][10] In 1966 and 1968, in a dig which focused mainly on the "Solar Shrine", Yohanan Aharoni worked the site on behalf of Hebrew University and Tel Aviv University.[1][11]

Excavation campaigns by James Leslie Starkey recovered a number of Hebrew letters, written on pieces of pottery, so-called ostraca. Eighteen letters were found in 1935 and three more in 1938, all written in Paleo-Hebrew script. They were from the latest occupational level immediately before the Chaldean siege. They then formed the only known corpus of documents in classical Hebrew.[15][16]

Another major contribution to Biblical archaeology from excavations at Lachish are the LMLK seals, which were stamped on the handles of a particular form of ancient storage jar. More of these artifacts were found at this site (over 400; Ussishkin, 2004, pp. 2151–9) than any other place in Israel (Jerusalem remains in second place with more than 300). Most of them were collected from the surface during Starkey's excavations, but others were found in Level 1 (Persian and Greek era), Level 2 (period preceding Babylonian conquest by Nebuchadnezzar), and Level 3 (period preceding Assyrian conquest by Sennacherib). It is thanks to the work of David Ussishkin's team that eight of these stamped jars were restored, thereby demonstrating lack of relevance between the jar volumes (which deviated as much as 5 gallons or 12 litres), and also proving their relation to the reign of Biblical king Hezekiah.[17][18]

The 1898 Reference by Bliss, contains numerous drawings, including examples of Phoenician, etc. pottery, and items from pharaonic Egypt, and other Mediterranean, and inland regions.

The Fourth Expedition to Lachish