From Infogalactic: the planetary knowledge core
Jump to: navigation, search
For other uses of Laconia and Lakonia, see Laconia (disambiguation).

Laconia (Greek: Λακωνία), also known as Lacedaemonia, is a region in the southeastern part of the Peloponnese peninsula. Its administrative capital is Sparta. The word laconic is derived from the name of the region by analogy—to speak in a concise way, as the Spartans were reputed by the Athenians to do. 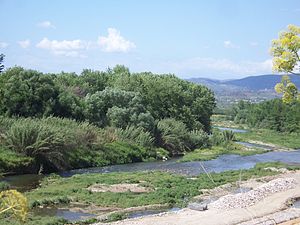 Eurotas (river) outside the city of Sparti.

Laconia is bordered by Messenia to the west and Arcadia to the north and is surrounded by the Myrtoan Sea to the east and by the Laconian Gulf and the Mediterranean Sea to the south. It encompasses Cape Malea and Cape Tainaron and a large part of the Mani Peninsula. The islands of Kythira and Antikythera lie to the south, but they administratively belong to the Attica regional unit of islands. The island, Elafonisos, situated between the Laconian mainland and Kythira, is part of Laconia.

The Evrotas is the longest river in the prefecture. The valley of the Evrotas is predominantly an agricultural region that contains many citrus groves, olive groves, and pasture lands. It is the location of the largest orange production in the Peloponnese and probably in all of Greece. Lakonia, a brand of orange juice, is based in Amykles.

The main mountain ranges are the Taygetus (2,407 m) in the west and the Parnon (1,961 m) in the northeast. Taygetus, known as Pentadaktylos (five-fingers) throughout the Middle Ages, is west of Sparta and the Evrotas valley. It is the highest mountain in Laconia and the Peloponnese and is mostly covered with pine trees. Two roads join the Messenia and Laconia prefectures: one is a tortuous mountain pass through Taygetus and the other bypasses the mountain via the Mani district to the south.

The stalactite cave, Dirou, a major tourist attraction, is located south of Areopolis in the southwest of Laconia.

Laconia has a Mediterranean climate with warm winters and hot summers. Snow is rare on the coast throughout the winter but is very common in the mountains. 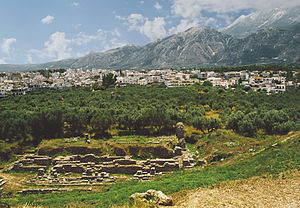 The theater of ancient Sparta with modern Sparti and Taygetus in the background.

In ancient Greece, this was the principal region of the Spartan state. Throughout classical antiquity, the Spartan sphere of influence expanded to Messenia, whose inhabitants (the Helots) were permanently enslaved. Significant archaeological recovery exists at the Vaphio-tomb site in Laconia. Found here are advanced Bronze Age art as well as evidence of cultural associations with the contemporaneous Minoan culture on Crete.[1] Laconia was at war with the Kingdom of Macedonia and saw several battles; at the end of the Mycenaean period, population of Laconia sharply declined.[2] From the early-2nd century BC until 395, it was a part of the Roman Empire. 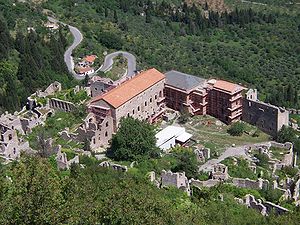 In the medieval period, Laconia formed part of the Byzantine Empire. Following the Fourth Crusade, it was gradually conquered by the Frankish Principality of Achaea. In the 1260s, however, the Byzantines recovered Mystras and other fortresses in the region and managed to evict the Franks from Laconia, which became the nucleus of a new Byzantine province. By the mid-14th century, this evolved into the Despotate of Morea, held by the last Greek ruling dynasty, the Palaiologoi. With the fall of the Despotate to the Ottomans in 1460, Laconia was conquered as well.

With the exception of a 30-year interval of Venetian rule, Laconia remained under Ottoman control until the outbreak of the Greek War of Independence of 1821. Following independence, Sparta was selected as the capital of the modern prefecture, and its economy and agriculture expanded. With the incorporation of the British-ruled Ionian Islands into Greece in 1864, Elafonissos became part of the prefecture. After World War II and the Greek Civil War, its population began to somewhat decline, as people moved from the villages toward the larger cities of Greece and abroad.

In 1992, a devastating fire ruined the finest olive crops in the northern part of the prefecture, and affected the area of Sellasia along with Oinountas and its surrounding areas. Firefighters, helicopters and planes battled for days to put out the horrific fire.

The Mani portion along with Gytheio became famous in Greece for filming episodes of Vendetta, broadcast on Mega Channel throughout Greece and abroad on Mega Cosmos.

In early 2006, flooding ruined olive and citrus crops as well as properties and villages along the Evrotas river. In the summer 2006, a terrible fire devastated a part of the Mani Peninsula, ruining forests, crops, and numerous villages. 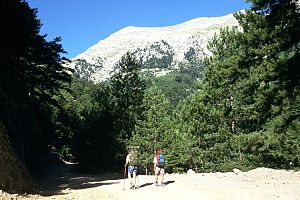 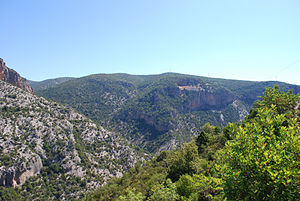 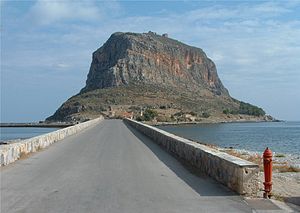 The rock of Monemvasia 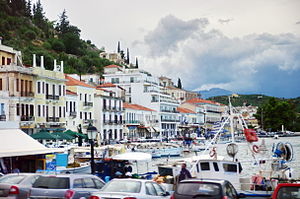 The port of Gytheio, Mani peninsula.

The regional unit, Laconia, is subdivided into five municipalities. These are (number as in the map in the infobox):[3]

As a part of the 2011 Kallikratis government reform, regional unit Laconia was created out of the former prefecture Laconia (Greek: Νομός Λακωνίας). The prefecture had the same territory as the present regional unit. At the same time, the municipalities were reorganised, according to the table below.[3]

The main cities and towns of Laconia are (ranked by 2011 census population):