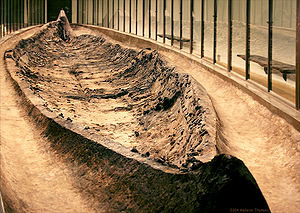 The Ladby ship is a major ship burial, of the type also represented by the boat chamber grave of Hedeby and the ship burials of Oseberg, Borre, Gokstad and Tune in South Norway, all of which date back to the 9th and 10th centuries. It is the only ship burial discovered in Denmark. It was discovered southwest of Kerteminde on the island of Funen.

The grave is situated within an ordinary burial site, from the Viking Age. Excavations revealed an abundance of grave goods consisting both of objects and of animals. It was previously dated to the early 10th century, based on a gilded link of bronze for a dog-harness, decorated in Jelling style, that was found there.

The grave had been extensively disturbed and, since only a few small human bones were found, this has been interpreted to be a translation, i.e. removal from a heathen to a Christian grave. Another more likely interpretation is that the struggle for dominance by King Haraldr Blátönn and his heir, Sveinn Tjúguskegg, may have led to the grave being desecrated. It was, after all, a symbol of power very visible to all who travelled or lived in the area, glorifying the minor king buried there. By removing the deceased and chopping all his grave goods into hundreds of pieces within a few years of the burial, the attackers presumably gave his heirs a great blow to their family prestige.

The site was discovered on or around February 28, 1935, and the excavation was performed by conservator G. Rosenberg and pharmacist P. Helweg Mikkelsen, between 1935 and 1937. Their original drawings constitute the primary source-material for information on the find. P.Helweg Mikkelsen also showed himself to be a patron of historical landmarks by paying for an arched building to be raised above the site, which was then covered with earth and grass. This was then given to the National Museum, which had full responsibility for the site until 1994, when it passed to the department of Archaeology and Landscape at the Viking Museum at Ladby (part of The Museums of Eastern Funen).

Now the Viking Museum at Ladby displays many of the original finds and offers an engaging overview of the Viking era as it unfolded on the north east of the island of Funen. The new building from 2007 also contains a reconstruction of the ship burial. It shows the scene as it may have looked right after the funeral, with the deceased chieftain lying on a bed in a full-scale replica of his ship, with all his grave goods, near his dogs and his eleven horses. There is also an interpretive movie about the Vikings' beliefs regarding the journey to the realm of the dead, based on Norse myths and the images on the Gotlandic Picture stones.[1]