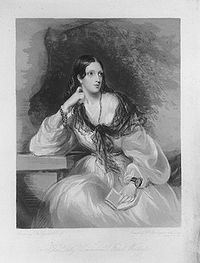 After the death of her husband in 1844, she began to travel as a wealthy Victorian widower. She died of dysentery while travelling through Ottoman Empire regions following the history of the early Christians. In October 1855 she died from dysentery in the area between Antioch and Beirut.[3]