Lagerstroemia /ˌleɪɡərˈstriːmiə/,[1] commonly known as crape myrtle or crepe myrtle, is a genus of around 50 species of deciduous and evergreen trees and shrubs native to the Indian subcontinent, southeast Asia, northern Australia, and parts of Oceania, cultivated in warmer climates around the world. It is a member of the family Lythraceae, which are also known as the loosestrife family. The genus is named after the Swedish merchant Magnus von Lagerström, who supplied Carl Linnaeus with plants he collected. These flowering trees are beautifully colored and are often planted both privately and commercially as ornamentals.

Crepe myrtles are chiefly known for their colorful and long-lasting flowers which occur in summer. Most species of Lagerstroemia have sinewy, fluted stems and branches with a mottled appearance that arises from having bark that sheds throughout the year. The leaves are opposite and simple, with entire margins, and vary from 5–20 cm (2–8 in). While all species are woody in nature, they can range in height from over 30 m (100 ft) to under 30 cm (1 ft); most, however, are small to medium multiple-trunked trees and shrubs. The leaves of temperate species provide autumn color.

Flowers are borne in summer and autumn in panicles of crinkled flowers with a crepe-like texture. Colors vary from deep purple to red to white, with almost every shade in between. Although no blue-flowered varieties exist, the flowers trend toward the blue end of the spectrum with no orange or yellow except in stamens and pistils. The fruit is a capsule, green and succulent at first, then ripening to dark brown or black dryness. It splits along six or seven lines, producing teeth much like those of the calyx, and releases numerous, small, winged seeds.

In their respective climates, both subtropical and tropical species are common in domestic and commercial landscapes. The timber of some species has been used to manufacture bridges, furniture, and railway sleepers,[2] but in Vietnam's Cat Tien National Park, the dominant stands of Lagerstroemia calyculata in secondary forest are thought to have survived (after episodes of logging) due to the low quality of wood.[3] Lagerstroemia species are used as food plants by the larvae of some Lepidoptera (moth and butterfly) species including Endoclita malabaricus.

The leaves of L. parviflora are fed on by the Antheraea paphia moth which produces the tassar silk (tussah), a form of wild silk of commercial importance in India.[4] 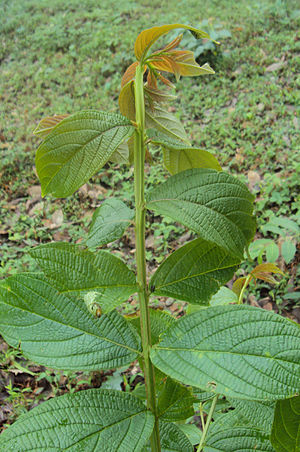 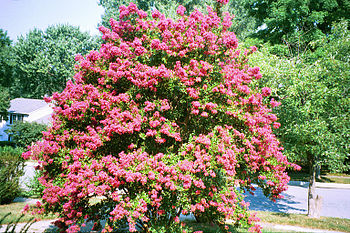 The common crepe myrtle (L. indica) from China and Korea was introduced circa 1790 to Charleston, South Carolina, in the United States by the French botanist André Michaux. In the wild, the species is most often found as a multistemmed large shrub, but 200 years of cultivation have resulted in a huge number of cultivars of widely varying characteristics. Today, crepe myrtle varieties can fill every landscape need, from tidy street trees to dense barrier hedges to fast-growing dwarf types of less than 60 cm (2 ft), which can go from seed to bloom in a season (allowing gardeners in places where the plant is not winter-hardy to still enjoy the intense colors of the frilly flowers). In Europe, crepe myrtle is common in the south of France, the Iberian Peninsula, and most of Italy; in the United States, it can be seen south of USDA zone 6, doing best and avoiding fungal diseases in mild climates that are not overly humid, such as inland California and Texas.

While not as widely known, the Japanese crepe myrtle, L. fauriei, from central and southern Japan, is becoming increasingly important, both as a landscaping plant and as a parent in complex hybrids with L. indica. This species is distinctly tree-like, with colorful deciduous bark and dark green leaves which are more resistant to fungal diseases than are those of its more popular relative. The Japanese name for this tree is saru suberi (猿滑、百日紅?, literally "monkey slip", latter spelling ateji) which refers to the smooth, slippery bark. Flowers are as large as those of L. indica, but are white with only the slightest pink flush appearing in some individuals. Japanese crepe myrtle is hardier to cold than many strains of L. indica, a characteristic (along with fungal resistance, tree form and colorful bark) that makes it valuable as genetic material for hybridization. Cultivars available include 'Kiowa', 'Fantasy', and 'Townhouse'.[5]

L. speciosa, known as queen crepe myrtle, giant crepe myrtle, or banabá, originates in subtropical and tropical India. It can be grown in any similar climate, but in the United States is suitable only for southern Florida, southernmost Texas, southern California, and Hawaii. It is a large evergreen tree with colorful rosy-mauve flowers and striking white bark, suitable for public parks and avenues; only the seed-grown species is commonly available for sale, unlike L. indica and L. fauriei, which have dozens of cultivars.