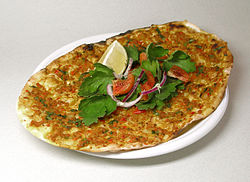 Lahmacun (Armenian: լահմաջու lahmaǰu or լահմաջո lahmaǰo; Turkish: Lahmacun from Arabic: لحم عجين‎‎, laḥm ʿajīn, short for لحم بعجين‎, laḥm biʿajīn, "meat with dough")[1] is a round, thin piece of dough topped with minced meat (most commonly beef or lamb) and minced vegetables and herbs including onions, tomatoes and parsley, then baked. Lahmacun is often served with ayran or şalgam and wrapped around vegetables, including pickles, tomatoes, peppers, onions, lettuce, and roasted eggplant.[2][3][4][5]

Lahmacun is a popular dish in Armenia,[6] Syria,[1] Turkey,[6] and in Armenian/Turkish communities worldwide.[6] The dish has existed for thousands of years but has become much more popular over the last few decades.[6] The dish is sometimes known as "Turkish"[2][7] or "Armenian pizza".[8][9]

In Jerusalem it has become popular because of migration of Urfalim Jews from southeastern Turkey, tamarind paste is sometimes added to the meat.