From Infogalactic: the planetary knowledge core
Jump to: navigation, search
For the surname, see Lahti (surname).

Lahti (Finnish pronunciation: [ˈlɑxti], Swedish: Lahtis) is a city and municipality in Finland.

Lahti is the capital of the Päijänne Tavastia region. It is situated on a bay at the southern end of lake Vesijärvi about 100 kilometres (60 mi) north-east of the capital Helsinki. In English, the Finnish word Lahti literally means bay. The Lahti region is growing and is one of the main economic hubs of Finland.

The coat of arms of the city depicts a train wheel surrounded by flames.

Lahti was first mentioned in documents in 1445. The village belonged to the parish of Hollola and was located at the medieval trade route of Ylinen Viipurintie, which linked the towns of Hämeenlinna and Vyborg. 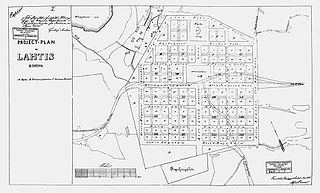 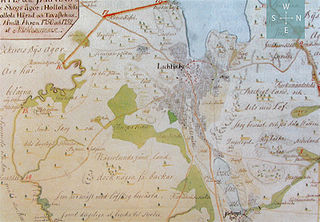 The completion of the Riihimäki – St. Petersburg railway line in 1870 and the Vesijärvi canal in 1871 turned Lahti into a lively station, and industrial installations began to spring up around it. For a long time, the railway station at Vesijärvi Harbour was the second busiest station in Finland. Craftsmen, merchants, a few civil servants and a lot of industrial workers soon mixed in with the existing agricultural peasantry.

On 19 June 1877, almost the entire village was burned to the ground. However, the accident proved to be a stroke of luck for the development of the place, as it led to the authorities resuming their deliberations about establishing a town in Lahti. The village was granted market town rights in 1878 and an empire-style, grid town plan was approved, which included a large market square and wide boulevards. This grid plan still forms the basis of the city center. Most of the buildings were low wooden houses bordering the streets.

Lahti was founded during a period of severe economic recession. The Russian Empire was encumbered by the war against Turkey. The recession also slowed down the building of the township: land would not sell and often plots were not built on for some time. In its early years, the town with its meagre 200 inhabitants was too small to provide any kind of foundation for trade. At the end of the 1890s, Lahti’s Township Board increased its efforts to enable Lahti to be turned into a city. In spring 1904, the efforts finally bore fruit as the Senate approved of the application, although it was another eighteen months before Tsar Nicholas II finally gave his blessing and issued an ordinance for establishing the city of Lahti.

At the end of 1905, the area that now comprises Lahti accommodated around 8,200 people of whom just under 3,000 lived in the city itself. All essential municipal institutions were built in just ten years, including a hospital and a city hall. At the same time, a rapid increase in brick houses was taking place in the centre of the city.

In the early 1920s the city gained possession of the grounds of the Lahti Manor, an important piece of land previously blocking the city from the lake. Large-scale industrial operations grew rapidly in the 1930s as did the population; Lahti, at the time, was one of Finland’s fastest-growing cities, and before the start of the Winter War its population was approaching 30,000.

Through the addition of new areas in 1924, 1933 and 1956, Lahti grew, both in terms of population and surface area. Especially strong was the growth after the wars, when Lahti accepted about 10,000 immigrants from Karelia, after the region was surrendered to the Soviet Union, and then later in the 1960 and 70's as a result of mass urbanization. The population growth came to a sharp end in 1975 and the city has since grown very little. 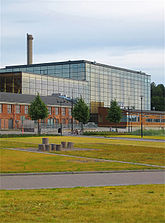 Lahti harbors cultural ambitions, and recent years saw the building of a large congress and concert center, the Sibelius Hall. Lahti has one of Finland's most widely known symphony orchestras, the Lahti Symphony Orchestra (Sinfonia Lahti), which performs both classical and popular music, notably concentrating on music by Jean Sibelius.

Ski jumps at the sports centre

Lahti has a rich sporting tradition, especially in various wintersports. The city is well known for the annually held Lahti Ski Games (Salpausselän kisat) and the Finlandia-hiihto cross-country skiing contest. It is also the only city to host the FIS Nordic World Ski Championships six times, doing so in 1926, 1938, 1958, 1978, 1989, and 2001, with the next championships to be held in 2017.

The Pelicans have competed in the top level of Finnish ice hockey, the Liiga, since 1999. Before the new millennium Reipas represented Lahti in top-flight hockey for 50 years. Many former NHL players, such as Janne Laukkanen, Toni Lydman and Pasi Nurminen, have started their careers in Reipas.

Historically the city's most successful association football club has been Kuusysi. In their golden years lasting from the early 1980s to the 1990s they won five Finnish championships as well as two Finnish Cup titles, with appearances in European competitions each year. Their greatest rivals, Reipas, won a total of three championships and seven cup titles from 1963 to 1978 but diminished in the early 1980s as Kuusysi got stronger.

In the 1990s both clubs ended up in such massive financial difficulties that a merger was executed in 1996, with the newly formed club adopting a new name, crest and colours. FC Lahti has played in the Veikkausliiga since 1999, excluding a season-long visit to the first division in 2011, placing third and appearing in Europe twice.

The 1997 World Games and the 2009 World Masters Athletics Championships were held in Lahti. For the 1952 Summer Olympics, some of the football matches were played at Kisapuisto. 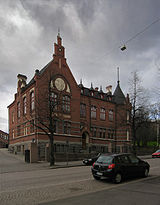 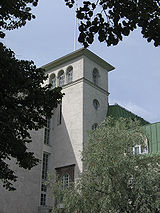 Lahti has 16 comprehensive schools and eight secondary schools. Comprehensive education is also available in English and Swedish. Lahden yhteiskoulu is the city's only private school offering both comprehensive and upper secondary education.

All four upper secondary schools in Lahti have a specialty: the Lyceum has expertise on subjects such as mathematics and biology, Tiirismaa focuses on music in association with the Lahti Conservatory, Kannas organises theatre classes and students at Salpausselkä can enlist on a curriculum with additional emphasis on physical education.

Salpaus is an educational consortium owned by the municipalities in Päijänne Tavastia arranging most of the region's vocational education and trade schooling. The privately-owned Dila and Lahti Conservatory educate students for healthcare and music-related professions, respectively.

Lahti's greatest educational asset is the highly valued Institute of Design and Fine Arts, which is a part of Lahti University of Applied Sciences, the LAMK. The institute has gained international recognition in particular for jewelry and industrial design, while other areas of expertise include metal, woodworking and furniture.

There are two national sports institutes near Lahti. The Vierumäki International Sports Institute based in Heinola is the most versatile centre of sports and physical education in the country, operating under the Ministry of Culture and Education. In addition the Pajulahti Sports Institute, located in Nastola, is one of the leading sports and training centres in Finland.

One of Finland's six multidisciplinary university campuses is based in central Lahti. The University of Helsinki's Department of Environmental Sciences is the university's only science department located outside the Greater Helsinki area.

The economic region of Lahti, which includes the surrounding municipalities, was strongly affected by the collapse of Finnish-Soviet trade and by the recession in the early 1990s. The value of production slumped, especially in the mechanical engineering industry and other manufacturing industries (e.g. the furniture industry). Production also decreased in the textile and clothing industry. In 1990, there were 90,370 jobs in the Lahti region. The number of jobs diminished over the next couple of years, so that in 1993 there were fewer than 70,000 jobs in the region. The number of jobs had slowly increased to 79,138 in 1999. 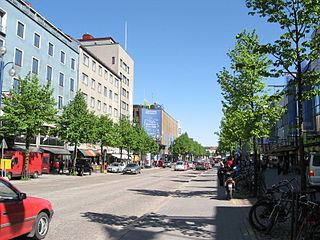 The city centre of Lahti 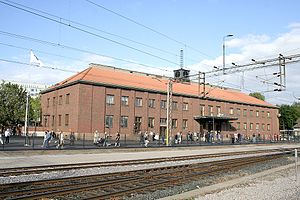 Railway station, built in 1935 and designed by architect Thure Hellström.

The city is served by 20 local bus lines, most of which are pendulum lines between two different areas via city centre. Bus transport in the Päijänne Tavastia region is organised by the regional transportation authority, known as Lahden seudun liikenne or LSL, and run by several private companies which have bid for the right to run their lines. LSL buses cover all urban areas at 10-20 minute intervals and most nearby municipalities at 30-60 minute intervals.

Lahti is served by VR commuter rail, the Z train to Helsinki and the R train to Riihimäki run hourly. Most services to Kouvola don't have a letter designation and are run every three hours aside from rush hours. There are plans for building two new train stops inside the city limits before 2020, Hennala and Karisto. A local service to Heinola has been proposed but renovating the old line has been deemed too expensive and unprofitable in the long term, unless the Finnish state reaches an agreement with regional councils to finance a direct rail link from Lahti to either Jyväskylä or Mikkeli. 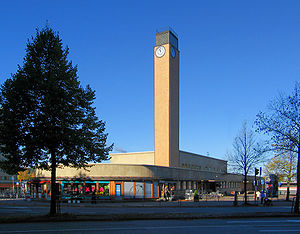 Bus station, built in 1939 and designed by architect Kaarlo Könönen.

The city's main transportation hubs in the near future will be the market square (Kauppatori) and the new travel centre (Matkakeskus), the latter of which is built around the existing railway station. All trains and buses will stop at Matkakeskus from early 2016. The old bus station in the city centre will be demolished and long-distance passengers will be directed to Matkakeskus. Local buses will provide a nonstop service between the two hubs every few minutes.

The asteroid 1498 Lahti was named after the city by its discoverer, the Finnish astronomer Yrjö Väisälä.

Lahti is twinned with: