From Infogalactic: the planetary knowledge core
Jump to: navigation, search
This article is about the Northeast Caucasian language. For the Kurdish variety, see Laki dialect. For the Kartvelian language, see Laz language.

The Lak language زبان لکی (лакку маз, lakːu maz) is a Northeast Caucasian language forming its own branch within this family. It is the language of the Lak people from the Russian autonomous republic of Dagestan, where it is one of six standardized languages. It is spoken by about 157,000 people. 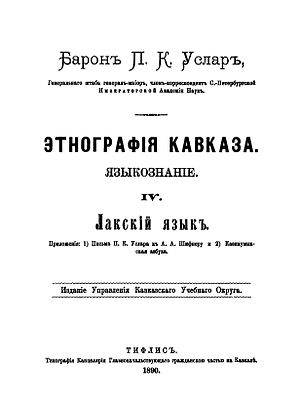 Cover page of the textbook on Lak grammar named "Лакскiй языкъ" or The Lak language compiled by P. K. Uslar in 1890 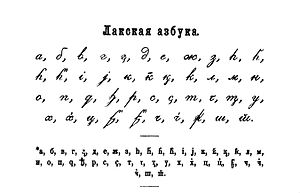 In 1864 Russian ethnographer and linguist P. K. Uslar wrote: "Kazikumukh grammar or as I called it for short in the native language, the Lak grammar, Lakku maz, the Lak language, is ready".[3]

In 1890 a textbook was published on Lak grammar compiled by P.K. Uslar named as The Lak Language. It stated under the title "Lak alphabet": "The proposed alphabet is written for people who name themselves collectively Lak, genitive Lakral. From among these people each one is named separately Lakkuchu 'Lakian man,' the woman — Lakkusharssa 'Lakian woman.' Their homeland they name Lakral kIanu — 'Lak place.'"[3]

Lak has throughout the centuries adopted a number of loanwords from Arabic, Turkish, Persian, and Russian.[4] Ever since Dagestan was part of the USSR and later Russia, the largest portion of loanwords have come from Russian, especially political and technical vocabulary. There is a newspaper and broadcasting station in Lak language.[5]

In accordance with the Constitution of the Republic of Dagestan of 1994, Lak language was named as the state language along with Russian and some other major languages spoken in Dagestan (about 20 local languages are unwritten and have no official status). Lak language is used as a teaching tool in elementary school and taught as a subject in secondary schools, vocational schools and universities. There is Lak newspaper "Ilchi".

The standard Lak language is based on the dialect of the city of Kumukh. This city should not be confused with the Kumyk ethnic group, a Turkic people also present in the Caucasus. To sum up, the Lak language has the following dialects: Kumukh, Vitskhi, Arakul, Balkhar, Shadni, Shalib, Vikhli, Kuli, and Kaya.

Initially Lak language by lexicon was found to be close to Dargin language and the two were often combined in one Lak-Dargin subgroup of Dagestani languages. However, further research has led the scientists to conclude that this association was weak. Recent research points to the grammatical closeness of the Lak language with Avaro-Ando-Tsezic subgroup of languages.

The free pronouns of Lak do distinguish first and second person.[7]

The Lak language was written using the Arabic script until 1928. Afterwards it was written with a Latin alphabet for ten years, and since 1938 it has been written in Cyrillic.