Lake Bafa or Lake Bafa Nature Park (Turkish: Bafa Gölü Tabiat Parkı) is a lake and a nature reserve situated in southwestern Turkey, part of it within the boundaries of Milas district of Muğla Province and the northern part within Aydın Province's Söke district.[1] The lake used to be a gulf of the Aegean Sea until the Classical period, when the sea passage was gradually closed by the alluvial mass brought by Büyük Menderes River. The gulf, and later the lake, was named Latmus in antiquity.

The southern shore of the lake is traced by the highway connecting İzmir-Kuşadası-Söke to towns such as Milas and Bodrum that are situated in the south. The northern shore of the lake, where steep slopes are covered by wild or semi-domesticated olive trees, is virtually untouched to this day. 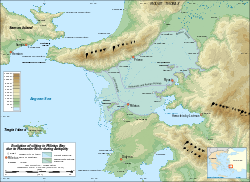 Location of lake Bafa at Maeander River's mouth and the steps of its creation during Antiquity.

At the innermost north-east tip of the lake is the village of Kapıkırı, as well as the ruins of Heraclea by Latmus (sometimes called Heraclea in Ionia), to distinguish from other ancient Greek sites named Heraclea. The mountain chain of Beşparmak (Dağları) -also named (Latmus) in antiquity- rises on the back, sheltering the non-restored ruins of a dozen monasteries dating from the Byzantine era on its slopes. Yet another monastery is situated on an islet on the lake just across the village. The village of Kapıkırı has recently developed important facitilies catering to visiting tourists, although agriculture and fishing still occupies an important part in its economy.

According to the legend, it was here that the goddess Selene fell in love with the shepherd Endymion and she asked Zeus to keep the young shepherd in perpetual sleep and bore up to fifty children from her nightly encounters with the sleeping young man.