Originally designed as Cross Mountain Air Force Station, Lake City AFS was one of twenty-eight stations built as part of the second segment of the permanent Air Defense Command network. Prompted by the start of the Korean War, on 11 July 1950, the Secretary of the Air Force asked the Secretary of Defense for approval to expedite construction of the second segment of the permanent network. Receiving the Defense Secretary’s approval on 21 July, the Air Force directed the Corps of Engineers to proceed with construction.

The 663d Aircraft Control and Warning Squadron began operations at a temporary "Lashup" site L-47 located at McGhee Tyson Airport, near Knoxville, TN on 1 January 1951. It later moved to a Tennessee National Guard Armory in nearby Maryville, Tennessee in November 1951.

With construction at Cross Mountain AFS finishing in March 1952, the 633d AC&W Squadron began operating a pair of AN/CPS-6B and AN/FPS-10 radars from the permanent site, allowing for the deactivation of L-47 at Maryville. The station functioned as a Ground-Control Intercept (GCI) and warning station. As a GCI station, the squadron's role was to guide interceptor aircraft toward unidentified intruders picked up on the unit's radar scopes. The station was re-designated as Lake City AFS, TN, on 1 December 1953. An AN/FPS-6 height-finder radar was added in 1958. One AN/FPS-10 was removed in 1959.

This site ceased operations on 1 June 1961 due to budget constraints. Today the site is the location for the WCYQ & WDVX radio transmitter and several towers including a Television station. 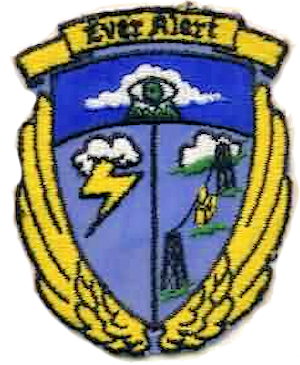 Emblem of the 633d Aircraft Control and Warning Squadron