From Infogalactic: the planetary knowledge core
Jump to: navigation, search
This article is about the European lake. For other uses, see Lake Constance (disambiguation).

Lake Constance (German: Bodensee) is a lake on the Rhine at the northern foot of the Alps, and consists of three bodies of water: the Obersee ("upper lake"), the Untersee ("lower lake"), and a connecting stretch of the Rhine, called the Seerhein.

The lake is situated in Germany, Switzerland and Austria near the Alps. Specifically, its shorelines lie in the German federal states of Bavaria and Baden-Württemberg, the Austrian federal state of Vorarlberg, and the Swiss cantons of Thurgau, St. Gallen and Schaffhausen. The Rhine flows into it from the south with its original course forming the Austro-Swiss frontier.

Lake Constance was formed by the Rhine Glacier during the ice age and is a zungenbecken lake. The Rhine, the Bregenzer Ache, and the Dornbirner Ache carry sediments from the Alps to the lake, thus gradually decreasing the depth and coastline extension of the lake in the southeast.

Lake Constance was first mentioned by the Roman geographer Pomponius Mela about 43 AD. He noted that the Rhine flows through two lakes, and gave them the Latin names Lacus Venetus (Obersee) and Lacus Acronius (Untersee). Pliny the Elder used the name Lacus Brigantinus, after the Roman city of Brigantium (today Bregenz). The lake is also colloquially known as the Swabian Sea[4] (das schwäbische Meer, also sometimes Suabian or Svebian Sea).

Approximately 1,000 tonnes (1,100 short tons) of fish were caught by 150 professional fishermen in 2001 which was below the previous ten year average of 1,200 tonnes (1,300 short tons) per year. The Lake Constance trout (Salmo trutta) was almost extinct in the 1980s due to pollution, but thanks to protective measures they have made a significant return. Lake Constance was the home of the now extinct species of trout Salvelinus profundus,[5] as well as of the Lake Constance whitefish (Coregonus gutturosus).[6] 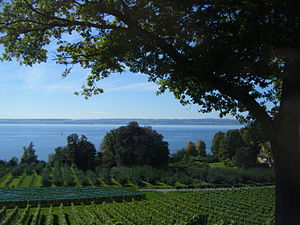 Lake Constance, seen from a vineyard

After the Council of Constance, the Latin-speaking Catholic world gave the lake its current international name. It was derived from the city name Constantia (Latin name of Konstanz), that, in turn, was named after a Roman emperor (either Constantius Chlorus or his grandson Constantius II). The German name, Bodensee, derives on the other hand from the town name Bodman (today's Bodman-Ludwigshafen) that is situated at a nearby branch of the lake just some 8 km northwest of Konstanz.

Lake Constance is the only area in Europe where no borders exist, because there is no legally binding agreement as to where the borders lie between Switzerland, Germany and Austria.[7] However, Switzerland holds the view that the border runs through the middle of the lake, Austria is of the opinion that the contentious area belongs to all the states on its banks, and Germany holds an ambiguous opinion. Legal questions pertaining to ship transport and fishing are regulated in separate treaties.

Naturally, disputes arise. One concerns a houseboat which was moored in two states (ECJ c. 224/97 Erich Ciola); another concerns the rights to fish in the Bay of Bregenz. In relation to the latter, an Austrian family was of the opinion that it alone had the right to fish in broad portions of the bay. However, this was accepted neither by the Austrian courts nor by the organs and courts of the other states.[8]

Flooding on the shore of Lake Constance, May 2013

Islands in the lake

The three major islands are:

These are all of the islands and former islands in Lake Constance, listed from east to west:

Towns and cities at the lake 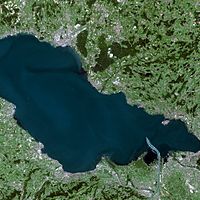 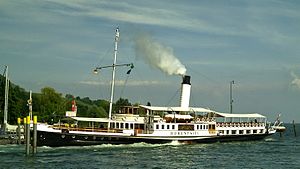 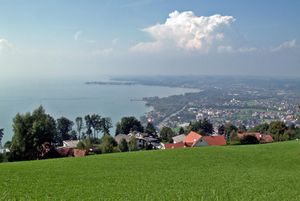 View from Mount Pfänder of Bregenz and the lake (with Lindau in the background). 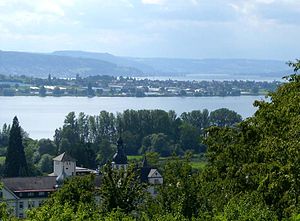 Reichenau seen from the German shore. 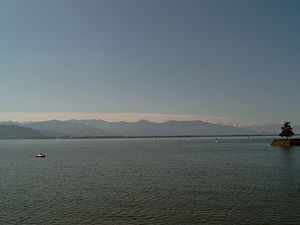 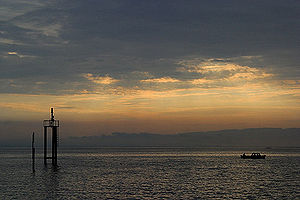 From the entry of the Rhine, on the northern or right shore:

From the entry of the Rhine, on the southern or left shore: