Lake Garda (Italian: Lago di Garda [ˈlaːɡo di ˈɡarda] or Lago Benaco, Latin: Benacus) is the largest lake in Italy. It is a popular holiday location and is located in northern Italy, about half-way between Brescia and Verona, and between Venice and Milan. Glaciers formed this alpine region at the end of the last Ice Age. The lake and its shoreline are divided between the provinces of Verona (to the south-east), Brescia (south-west), and Trentino (north).

The northern part of the lake is narrower, surrounded by mountains, the majority of which belong to the Gruppo del Baldo. The shape is typical of a moraine valley, probably having been formed under the action of a Paleolithic glacier. Although traces of the glacier's actions are evident today, in more recent years it has been hypothesised that the glacier occupied a previously existing depression, created by stream erosion 5 to 6 million years ago.

The lake has numerous small islands and five main ones, the largest being Isola del Garda. Nearby to the south is Isola San Biagio, also known as the Isola dei Conigli ("Island of the Rabbits"). Both are offshore of San Felice del Benaco, on the west side. The three other main islands are Isola dell'Olivo, Isola di Sogno, and Isola di Trimelone, all farther north near the east side. The main tributary is the Sarca River, others include Ponale River, Varone River and various streams from both mountain sides, while the only outlet is the Mincio River.

If the water level of the Adige river is too high, excess water is diverted to the lake through the Mori-Torbole tunnel.

Towns and villages on the lake

The ancient fortified town of Sirmione, located on the south of the lake, is one particularly popular destination, home to the Virgilio & Catullo Spa Complexes, as well as numerous restaurants, bars, hotels, fashion stores and a market. The picturesque Scaliger castle dates from the 13th century. The Roman poet Catullus had a villa here, and visitors can see a ruined Roman spa named the Grotte di Catullo (Grottoes of Catullus) although there is no evidence linking him to this particular building. The sulfur springs at the tip of the peninsula have a reputation for healing catarrhal conditions, particularly those involving the ear. Nearby, there is Gardaland, one of the most famous theme parks in Italy. 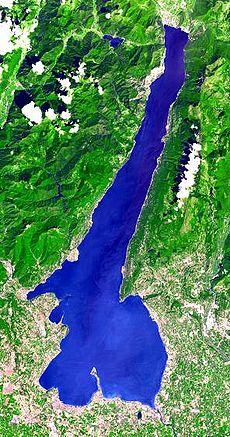 View from Torbole, looking south, over the water.

The particularly mild climate favours the growth of some Mediterranean plants, including the olive tree. Citrus (lemon) trees can also be found, which are extremely rare at this latitude (46 North).[1] This greatly favored the development of tourism since the end of the second world war. In ancient times, poets like Catullus wrote about "Lacus Benacus" with its mild climate vivified by the winds. With subtropical characteristics.

Salmo carpio, also known as the carpione (carpione del Garda[2][3] or Lake Garda carpione[4]) is a rare salmonid fish endemic to Lake Garda. It has been introduced to a number of other lakes in Italy and elsewhere but unsuccessfully in all cases.[2] The population in Lake Garda has been strongly declining, and is considered critically endangered (IUCN 3.1).[3][4] The main threats are due to overfishing, pollution and possibly competition from introduced species such as Coregonus and Salmonidae.[5]

Adult lake trout outside the mating season are silvery with very few black spots on the body and almost none on the head. During the mating season males develop some a dark mottled body coloration. Garda lake trout reach a length of up to 50 centimeters. They live primarily in depths of 100 to 200 meters. They feed on zooplankton and bottom-dwelling crustaceans in summer. Males and females reach sexual maturity at two or three years. The mating takes place every one to two years. The spawning takes place in 50 to 300 meters depth in the vicinity of underwater springs. The maximum age is five years.[6] 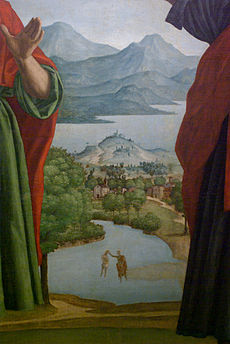 View of south lake near Peschiera del Garda (Verona, Italy) (probably with Lake Frassino or River Mincio), at the top off the painting are the mountains of Brescia (Italy). Painted after 1533 by Girolamo dai Libri.

Infrequent ferry services connect major towns on the eastern and western shores of Lake Garda. The services run in a zig-zag manner from Desenzano del Garda to Riva del Garda (Reiff-am-Gardasee), via Peschiera del Garda, Salò, Garda and Malcesine. One express ferry, on which bicycles are not allowed, operates per day: journey time from Riva/Reiff to Peschiera takes 2 hours.