The name Okeechobee comes from the Hitchiti words oki (water) and chubi (big). The oldest known name for the lake was Mayaimi (also meaning "big water"), reported by Hernando de Escalante Fontaneda in the 16th century.[6] Slightly later in the 16th century René Goulaine de Laudonnière reported hearing about a large freshwater lake in southern Florida called Serrope.[7] By the 18th century the largely mythical lake was known to British mapmakers and chroniclers by the Spanish name Laguna de Espiritu Santo.[8] In the early 19th century it was known as Mayacco Lake[9] or Lake Mayaca after the Mayaca people, originally from the upper reaches of the St. Johns River, who moved near the lake in the early 18th century. The modern Port Mayaca on the east side of the lake preserves that name.[10] The lake was also called Lake Macaco in the early 19th century.[11]

On the southern rim of Lake Okeechobee, three islands—Kreamer, Ritta, and Torey—were once settled by early pioneers. These settlements had a general store, post office, school, and town elections. Farming was the main vocation. The fertile land was challenging to farm because of the muddy muck. Over the first half of the twentieth century, farmers used agricultural tools—including tractors—to farm in the muck. By the 1960s, all of these settlements were abandoned.[12]

In 1926 the Great Miami Hurricane hit the Lake Okeechobee area, killing approximately 300 people. Two years later in 1928, the Okeechobee Hurricane crossed over the lake, killing thousands. The Red Cross reported 1,836 deaths which the National Weather Service initially accepted, but in 2003, the number was revised to "at least 2,500".[13] In both cases the catastrophe was caused by flooding from a storm surge when strong winds drove water over the 2 metre (6-foot) mud dike that circled the lake at the time.

After the two hurricanes, the Florida State Legislature created the "Okeechobee Flood Control District". The organization was authorized to cooperate with the U.S. Army Corps of Engineers in actions to prevent similar disasters. U.S. President Herbert Hoover visited the area personally, and afterward the Corps designed a plan incorporating the construction of channels, gates, and levees. The Okeechobee Waterway was officially opened on 23 March 1937 by a procession of boats which left Fort Myers, Florida on 22 March and arrived at Stuart, Florida the following day. The dike was then named the "Herbert Hoover Dike" in honor of the president.

The 1947 Fort Lauderdale Hurricane sent an even larger storm surge to the crest of the new dike, causing it to be expanded again in the 1960s.

Three recent hurricanes–Hurricane Frances, Hurricane Jeanne, and Hurricane Wilma–had no major adverse effects on communities surrounding Lake Okeechobee, even though the lake rose 18 inches (46 cm) after Hurricane Wilma in 2005. Tropical Storm Ernesto increased water levels by 1 foot (30 cm) in 2006, the last time it exceeded 13 feet (4.0 m).[14] However, the lake's level began dropping soon after and by July 2007, it had dropped more than 4 feet (1.2 m) to its all-time low of 8.82 feet (2.69 m). In August 2008, Tropical Storm Fay increased water levels to 0.65 metres (2.1 ft)[clarification needed] above sea level, the first time it exceeded 3.66 metres (12.0 ft) since January 2007. Over a seven-day period (including some storms that preceded Fay), about 20 centimetres (7.9 in) of rain fell directly onto the lake.[14] 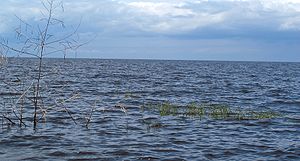 During construction of the dike, earth was excavated along the inside perimeter, resulting in a deep channel which runs along the perimeter of the lake. In most places the canal is part of the lake, but in others it is separated from the open lake by low grassy islands such as Kreamer Island. During the drought of 2007-2008 this canal remained navigable while much of surrounding areas were too shallow or even above the water line. Even when the waters are higher, navigating the open lake can be tricky, whereas the rim canal is simple, so to reach a specific location in the lake it is often easiest to go around the rim canal to get close then take one of the many channels into the lake.[15]

In 2007, during a drought, state water and wildlife managers removed thousands of truckloads of toxic mud from the lake's floor, in an effort to restore the lake's natural sandy base and create clearer water and better habitat for wildlife. The mud contained elevated levels of arsenic and other pesticides. According to tests from the South Florida Water Management District, arsenic levels on the northern part of the lake bed were as much as four times the limit for residential land. Independent tests found the mud too polluted for use on agricultural or commercial lands, and therefore difficult to dispose of on land.[16]

Through early 2008, the lake remained well below normal levels, with large portions of the lake bed exposed above the water line. During this time, portions of the lake bed, covered in organic matter, dried out and caught fire.[17] In late August 2008, Tropical Storm Fay inundated Florida with record amounts of rain. Lake Okeechobee received almost a 1.2 m (4-foot) increase in water level, including local run-off from the tributaries.

In 2013 heavy rains in central Florida resulted in high runoff into the lake; rising lake levels forced the CoE (Army Corps of Engineers) to release large volumes of polluted water from the lake through the St. Lucie River estuary to the east and the Caloosahatchee River estuary to the west. Thus the normal mix of fresh and salt water in those estuaries was replaced by a flood of polluted fresh water resulting in ecological damage.[18]

Since 2013, the CoE has been forced to pump billions of gallons of water out of the lake to avoid jeopardizing the integrity of the Hoover dike holding back the water from inundating the surrounding populated area. Some claim that sugar plantations have been pumping polluted water from their flooded fields into the lake, but U. S Sugar claims back pumping is only to avoid flooding of communities, never to protect farm land. In March 2015, the rate was 2 billion gallons daily. This results in pollution problems for the Treasure Coast, St. Lucie estuary, and the Indian River Lagoon.[19][20]

In May 2016, 33 square miles (85 km2) of the southern portion of the lake were affected by an algal bloom.[21] The outbreak was possibly due in part to nutrient-laden waters reaching the lake from farms and other sources.[21][22] Microcystin was found among the other species involved in the outbreak.[21]

Lake Okeechobee sits in a shallow geological trough that also underlies the Kissimmee River Valley and the Everglades. The trough is underlain by clay deposits that compacted more than the limestone and sand deposits did along both coasts of peninsular Florida. Until about 6,000 years ago, the trough was dry land. As the sea level rose, the water table in Florida also rose and rainfall increased. From 6,000 to 4,000 years ago, wetlands formed building up peat deposits. Eventually the water flow into the area created a lake, drowning the wetlands. Along what is now the southern edge of the lake, the wetlands built up the layers of peat rapidly enough (reaching 4-to-4.3-metre (13 to 14 ft) thick) to form a dam, until the lake overflowed into the Everglades.[23] At its capacity, the lake holds 1 trillion US gallons (3.8×109 m3) of water[14] and is the headwaters of the Everglades.[24]

The floor of the lake is a limestone basin, with a maximum depth of 4 metres (13 ft). Its water is somewhat murky from runoff from surrounding farmlands. The Army Corps of Engineers targets keeping the surface of the lake between 12.5 and 15.5 feet (3.8 and 4.7 m) above sea level.[25] The lake is enclosed by a 40 feet (12 m) high Herbert Hoover Dike built by the U.S. Army Corps of Engineers after a hurricane in 1928 breached the old dike, flooding surrounding communities and claiming at least 2,500 lives.[26] Water flows into Lake Okeechobee from several sources, including the Kissimmee River, Fisheating Creek, Lake Istokpoga, Taylor Creek, and smaller sources such as Nubbin Slough and Nicodemus Slough.[27][28] The Kissimmee River is the largest source, providing more than 60% of the water flowing into Lake Okeechobee.[29][30] Fisheating Creek is the second largest source for the lake, with about 9% of the total inflow.[28] Prior to the 20th century, Lake Istokpoga was connected to the Kissimee River by Istokpoga Creek, but during the rainy season Lake Istokpoga overflowed, with the water flowing in a 40 km wide sheet across the Indian Prairie into Lake Okeechobee.[31] Today Lake Istokpoga drains into Lake Okeechobee through several canals that drain the Indian Prairie, and into the Kissimmee River through a canal that has replaced Istokpoga Creek.[32] Historically, outflow from the lake was by sheet flow over the Everglades, but most of the outflow has been diverted to dredged canals connecting to coastal rivers, such as the Miami Canal to the Miami River, the New River on the east, and the Caloosahatchee River (via the Caloosahatchee Canal and Lake Hicpochee) on the southwest.

According to the U.S. Army Corps of Engineers,[33] the Congressionally authorized uses for Lake Okeechobee include the following: 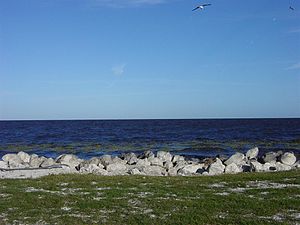 The most common fish in this lake are largemouth bass, crappie, and bluegill. Pickerel have been less commonly caught.

Lake Okeechobee and the Everglades are featured as a backdrop for the 1951 Gary Cooper film, Distant Drums.

Lake Okeechobee is the setting of a climactic scene in Carl Hiaasen's 2002 novel Basket Case (Ch. 28).

Used in the John Anderson song " Seminole Wind" Lyric: "And blow, blow from the Okeechobee, All the way up to Micanopy"

Lake Okeechobee is the setting of a significant part of Zora Neale Hurston's novel Their Eyes Were Watching God, and the movie of the same name. Janie and Tea Cake go there to work "on the muck." Hurston refers to the lake as "Big Lake Okechobee, big beans, big cane, big weeds, big everything". The description speaks to the migrant African American laborers working in this area during the agricultural season in the 1920s.[34]

Lake Okeechobee and the Everglades are settings in Patrick D. Smith's novel A Land Remembered, chronicling the effects of modernization upon the lake and the Seminole tribe.

Lake Okeechobee is famously mentioned in Hank Williams Jr.'s number one Billboard country hit song "Dixie on My Mind", when comparing country life to big city life: "I've always heard lots about the big apple / So I thought I'd come up here and see. / But all I've seen so far is one big hassle / wish I was camped out on the Okeechobee'".

In 2007, PBS Earth Edition produced a 27 minute video titled Lake Okeechobee: Big Water, Big Trouble. Earth Edition's description of the video follows: During the past 125 years, a series of well-intentioned decisions, actions and policies have turned what should have been one of Florida's greatest natural treasures into an environmental villain. Six thousand years later after it was formed, residents and agencies across the state are now raising the questions: Is it too late for Lake O? [35]