From Infogalactic: the planetary knowledge core
Jump to: navigation, search
Not to be confused with the Pontchartrain Expressway, a section of Interstate 10 and U.S. Route 90 Business.

The Lake Pontchartrain Causeway, sometimes only the Causeway,[2] is a causeway composed of two parallel bridges crossing Lake Pontchartrain in southern Louisiana, United States. The longer of the two bridges is 23.83 miles (38.35 km) long. The southern terminus of the Causeway is in Metairie, Louisiana, a suburb of New Orleans. The northern terminus is at Mandeville, Louisiana.

The bridges are supported by 9,500 concrete pilings.[5] The two bridges feature a bascule, which spans the navigation channel 8 miles (13 km) south of the north shore.

The idea of a bridge spanning Lake Pontchartrain dates back to the early 19th century and Bernard de Marigny, the founder of Mandeville. He started a ferry service that continued to operate into the mid-1930s. In the 1920s, a proposal called for the creation of artificial islands that would then be linked by a series of bridges. The financing for this plan would come from selling home sites on the islands. The modern Causeway started to take form in 1948 when Ernest M. Loeb Jr. envisioned the project. Due to his lobbying and vision, the Louisiana Legislature created what is now the Causeway Commission. The Louisiana Bridge Company was formed to construct the bridge, which in turn appointed James E. Walters Sr. to direct the project.[6] 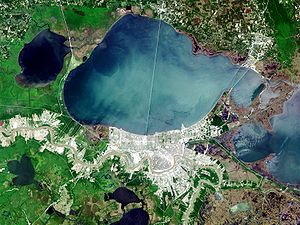 Since its construction, the Causeway has operated as a toll bridge. Until 1999, tolls were collected from traffic going in each direction. To alleviate congestion on the south shore, toll collections were eliminated on the northbound span. The standard tolls for cars changed from $1.50 in each direction, to a $3 toll collected on the North Shore for southbound traffic.

The opening of the Causeway boosted the fortunes of small North Shore communities by reducing drive time into New Orleans by up to 50 minutes, bringing the North Shore into the New Orleans metropolitan area. Prior to the Causeway, residents of St. Tammany Parish used either the Maestri Bridge on U.S. Route 11 or the Rigolets Bridge on U.S. Route 90, both near Slidell, Louisiana; or on the west side, via U.S. Route 51 through Manchac, Louisiana.[7]

After Hurricane Katrina on August 29, 2005, videos collected showed damage to the bridge. The storm surge was not as high under the Causeway as it was near the I-10 Twin Span Bridge, and damage was mostly limited to the turnarounds.[8] A total of 17 spans were lost.[8] Structural foundations remained intact. The causeways have never sustained major damage of any sort from hurricanes or other natural occurrences, a rarity among causeways. The existing fiber optic cable plant was blown out of its tray but remained intact per optical time domain reflectometer (OTDR) analysis. With the I-10 Twin Span Bridge severely damaged, the Causeway was used as a major route for recovery teams staying in lands to the north to get into New Orleans. The Causeway reopened first to emergency traffic and then to the general public – with tolls suspended – on September 19, 2005. Tolls were reinstated by mid-October of that year. 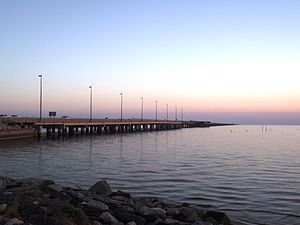