Lambaesis (Lambæsis), Lambaisis, or Lambaesa (Lambèse in colonial French), is a Roman ruin in Algeria, 7 miles (11 km) southeast of Batna and 17 miles (27 km) west of Timgad, located next to the modern village of Tazoult.[1] The former bishopric is also a Latin Catholic titular bishopric.

Lambaesa was founded by the Roman military. The camp of the third legion (Legio III Augusta), to which it owes its origin, appears to have been established between 123 and 129 AD, in the time of Roman emperor Hadrian, whose address to his soldiers was found inscribed on a pillar in a second camp to the west of the great camp still extant. However, other evidence suggests it was formed during the Punic Wars.

By 166 AD mention is made of the decurions of a vicus, 10 curiae of which are known by name; and the vicus became a municipium probably at the time when it was made the capital of the newly founded province of Numidia. Lambaesis was populated mainly by Romanized Berbers and by some Roman colonists with their descendants: Latin was the official and commonly-used language (even if local Berbers spoke their own language mixed with Latinisms).

The legion was removed by Gordian I, but restored by Valerian and Gallienus; and its final departure did not take place till after 392 AD (the town soon afterwards declined).

Indeed under Septimius Severus (193 AD), Numidia was separated from Africa Vetus, and governed by an imperial procurator. Under the new organization of the empire by Diocletian, Numidia was divided in two provinces: the north became Numidia Cirtensis, with capital at Cirta, while the south, which included the Aurès Mountains and was threatened by raids, became Numidia Militiana, "Military Numidia", with capital at the legionary base of Lambaesis. Subsequently however, Emperor Constantine the Great reunited the two provinces in a single one, administered from Cirta, which was now renamed Constantina (modern Constantine, Algeria) in his honour. Its governor was raised to the rank of consularis in 320 AD, and the province remained one of the seven provinces of the diocese of Africa until the invasion of the Vandals in 428 AD, which began its slow decay, accompanied by desertification. The province remained under Vandal rule, but was effectively limited to the coastal areas by Berber raids.It was restored to Roman rule after the Vandalic War, when it became part of the new praetorian prefecture of Africa.

The Byzantines occupied Lambaesis and vicinity from the sixth century but around 683 AD the Arabs conquered the area, naming what remained of the city Bar-el-Molouk in the 10th century.

Lambaesis was an episcopal see during late Ancient times as part of the Roman province of Numidia.[3]

Saint Cyprian mentions a heretic bishop of Lambaesis who was condemned by a local synod of bishops around the year 240.[4][5]

The diocese had faded, but was nominally restored as a titular bishopric, initially as Lambaisis, in 1925 renamed Lambaesis.

It has had the following incumbents, of the lowest (episcopal) rank :

The remains of the Roman town, and more especially of the Roman camp, in spite of wanton vandalism, are among the most interesting ruins in northern Africa. 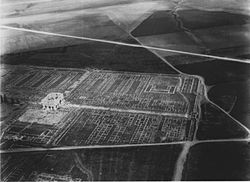 The ruins are situated on the lower terraces of the Aures Mountains, and consist of triumphal arches (one to Septimius Severus, another to Commodus), temples, aqueducts, vestiges of an amphitheatre, baths and an immense quantity of masonry belonging to private houses. To the north and east lie extensive cemeteries with the stones standing in their original alignments; to the west is a similar area, from which, however, the stones have been largely removed for building the modern village.

Of the temple of Aesculapius only one column is standing, though in the middle of the 19th century its façade was entire. The capitol or temple dedicated to Jupiter, Juno and Minerva, which has been cleared of debris, has a portico with eight columns. On level ground about two-thirds of a mile from the centre of the ancient town stands the camp, its site now partly occupied by the penitentiary and its gardens. It measures 1,640 feet (500 m) by 1,476 feet (450 m), and in the middle rise the ruins of a building commonly called, but incorrectly, the praetorium. This noble building, which dates from 268, is 92 feet (28 m) long by 66 feet (20 m) broad and 49 feet (15 m) high; its southern façade has a splendid peristyle half the height of the wall, consisting of a front row of massive Ionic columns and an engaged row of Corinthian pilasters. 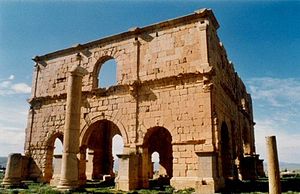 Behind this building (which was roofed), is a large court giving access to other buildings, one being the arsenal. In it have been found many thousands of projectiles. To the southeast are the remains of the baths. The ruins of both city and camp have yielded many inscriptions (Renier edited 1500, and there are 4185 in CIL viii); and, though a very large proportion are epitaphs of the barest kind, the more important pieces supply an outline of the history of the place. Over 2500 inscriptions relating to the camp have been deciphered. In a museum in the village are objects of antiquity discovered in the vicinity.[6] In addition to inscriptions and statues, there are some fine mosaics found in 1905 near the arch of Septimius Severus. The statues include those of Aesculapius and Hygieia, taken from the temple of Aesculapius.

About 2 miles (3.2 km) south of Lambessa are the ruins of Markuna, the ancient Verecunda, including two triumphal arches.