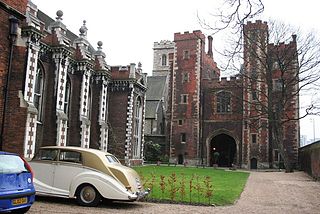 The Great Hall, St Mary-at-Lambeth, and the Tudor gatehouse (from inside), with the river on the right.

Lambeth Palace is the official London residence of the Archbishop of Canterbury in England, in north Lambeth, on the south bank of the River Thames, 400 m[1] south-east of the Palace of Westminster which has the Houses of Parliament on the opposite bank. The building – originally called the Manor of Lambeth or Lambeth House – has been the London residence of the Archbishop of Canterbury for nearly 800 years, whose original residence was in Canterbury, Kent.[2] It was acquired by the archbishopric around 1200 AD and has the largest collection of records of the church in its library. It is bounded by Lambeth Palace Road to the west and Lambeth Road to the south but unlike all surrounding land is excluded from the parish of North Lambeth. The garden park is listed and resembles Archbishop's Park, a neighbouring public park, however was a larger area with a notable orchard until the early 19th century. The former church in front of its entrance has been converted to the Garden Museum.

The south bank of the Thames along this reach, not part of historic London, developed slowly because the land was low and sodden: it was called Lambeth Marsh, as far downriver as the present Blackfriars Road. The name "Lambeth" embodies "hithe", a landing on the river: archbishops came and went by water, as did John Wycliff, who was tried here for heresy. In the English peasants' revolt of 1381 the Palace was attacked.

The oldest remaining part of the palace is the Early English chapel. The so-called Lollard’s Tower, which retains evidence of its use as a prison in the 17th century, dates from 1435-1440. The front is an early Tudor brick gatehouse built by Cardinal John Morton and completed in 1495. Cardinal Pole lay in state in the palace for 40 days after he died there in 1558. The fig tree in the palace courtyard is possibly grown from a slip taken from one of the White Marseille fig trees here for centuries (reputedly planted by Cardinal Pole). In 1786[3] there were three ancient figs, two "nailed against the wall" and still noted in 1826 as "two uncommonly fine... traditionally reported to have been planted by Cardinal Pole, and fixed against that part of the palace believed to have been founded by him. They are of the white Marseilles sort, and still bear delicious fruit. ...On the south side of the building, in a small private garden, is another tree of the same kind and age."[4] By 1882 their place had been taken by several massive offshoots.[5] The notable orchard of the medieval period has somewhat given way to a mirroring public park adjoining and built-up roads of housing and offices.[6]

The great hall, eclipsed by the library which it is now used as, was ransacked, even for building material, by Cromwellian troops during the English Civil War, and after the Restoration, it was completely rebuilt by archbishop William Juxon in 1663 (dated) with a late Gothic hammerbeam roof, the likes of which had not been constructed for a hundred years. In this context, the choice of a hammerbeam roof was evocative; it spoke of High-Church Anglican continuity with the Old Faith (the King's brother was an avowed Catholic), a visual statement that the Interregnum was over. As with some Gothic details on University buildings of the same date, it is debated among architectural historians whether this is Gothic survival or an extraordinary early work of the Gothic Revival. The diarist Samuel Pepys recognised it for what it was: "a new old-fashioned hall" he called it.

The building is listed in the highest category, Grade I for its architecture — its front gatehouse with its tall, crenellated gatehouse resembles Hampton Court Palace's gatehouse which is also of the Tudor period, however Morton's Gatehouse was at its very start, in the 1490s, rather than in the same generation as Cardinal Wolsey's wider, similarly partially stone-dressed deep red brick façade. While this is the most public-facing bit, it is not the oldest at north-west corner, the Water Tower or Lollards' Tower mentioned above is made of Kentish Ragstone with ashlar quoins and a brick turret is much older.[7]

Among the portraits of the archbishops in the Palace are works by Hans Holbein, Anthony van Dyck, William Hogarth and Sir Joshua Reynolds.

New construction was added to the building in 1834 by Edward Blore (1787–1879), who rebuilt much of Buckingham Palace later. Here his work is neo-Gothic enough to have satisfied Sir Walter Scott, and it fronts a spacious quadrangle. It is these buildings which form the Archbishop's London home and office, who is ex officio a member of the House of Lords and is regarded as the first among equals in the Anglican Communion. 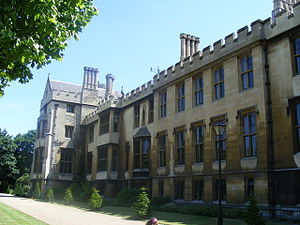 The palace is now also home to the Lambeth Palace Library, the official library of the Archbishop of Canterbury, principal holder of records of the Church of England, founded as a public library by Archbishop Richard Bancroft in 1610. This contains a vast collection of material relating to ecclesiastical history, including archbishops' and bishops' archives and papers relating to various Anglican missionary and charitable societies. The valuable collection of original manuscripts contains important material, some dating as far back as the 9th century. The various other collections contain material on an immense variety of topics from the history of art and architecture to colonial and Commonwealth history, and innumerable aspects of English social, political and economic history. The library is also a significant resource for local history and genealogy.

The library contains over 120,000 books as well as the archives of the Archbishops of Canterbury and other church bodies dating back to the 12th century. These can be found via the online catalogues (linked below). Highlights include a Gutenberg Bible and the Romanesque Lambeth Bible, with other notable manuscripts including the following:

The ornate building sitting on the grass square in front of the entrance is the former parish church of St Mary-at-Lambeth has a tower of 1377 repaired in 1834 and the rest was rebuilt in 1851 using architect P C Hardwick,[8] though the ancient monuments preserved and its style give it an appearance of antiquity. Among them are tombs of some of the archbishops, including Richard Bancroft, and of the gardeners and plantsmen John Tradescant the elder and his son of the same name, and of Admiral William Bligh. St Mary's was deconsecrated in favour of the surrounding active Anglican parish in 1972 of North Lambeth which was once more heavily populated than today's district of Central London and has three churches as well as a Lambeth Mission helping on the streets and in the homeless hostels,[9] and a few years later the Museum of Garden History (now the Garden Museum) opened there, because of its Tradescant associations.