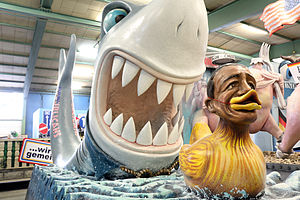 Mainz carnival 2015: Barack Obama as a Lame Duck. The shark is the Republican Party.

A lame duck, in politics, is an elected official who is approaching the end of their tenure, especially one whose successor has already been elected. The official is often seen as having less influence with other politicians due to their limited time left in office. Conversely, a lame duck is free to make decisions that exercise their standard powers with little fear of consequence, such as issuing executive orders or other controversial edicts. Lame duck politicians result from term limits, planned retirement, or electoral losses.

The status can be due to:

Lame duck officials tend to have less political power, as other elected officials are less inclined to cooperate with them. However, lame ducks are also in the peculiar position of not facing the consequences of their actions in a subsequent election, giving them greater freedom to issue unpopular decisions or appointments. Examples include last-minute midnight regulations issued by executive agencies of outgoing US presidential administrations and executive orders issued by outgoing presidents.[2] Such actions date back to the Judiciary Act of 1801 ("Midnight Judges Act"), in which Federalist President John Adams and the outgoing 6th Congress amended the Judiciary Act to create more federal judge seats for Adams to appoint and the Senate to confirm before the Democratic-Republican Thomas Jefferson was inaugurated and the Democratic-Republican majority 7th Congress convened. In more recent history, US President Bill Clinton was widely criticized for issuing 140 pardons and other acts of executive clemency on his last day in office, including two former close colleagues, donors, fellow Democratic members and his own half-brother.[3]

The phrase lame duck was coined in the eighteenth century at the London Stock Exchange, to refer to a stockbroker who defaulted on his debts.[4][5] The first known mention of the term in writing was made by Horace Walpole, in a letter of 1761 to Sir Horace Mann: "Do you know what a Bull and a Bear and Lame Duck are?" [6] In 1791 Mary Berry wrote of the Duchess of Devonshire's loss of £50,000 in stocks, "the conversation of the town" that her name was to be "posted up as a lame duck".[7] In the literal sense, it refers to a duck which is unable to keep up with its flock, making it a target for predators.

It was transferred to politicians in the nineteenth century, the first recorded use being in the Congressional Globe (the official record of the United States Congress) of January 14, 1863: “In no event ... could [the Court of Claims] be justly obnoxious to the charge of being a receptacle of ‘lame ducks’ or broken down politicians.”[8]

In Australia, regardless of when the election is held, the Senate (upper house) sits from the 1st of July following the election to the 30th of June six years later, while the newly elected members of the House of Representatives (lower house) take their seats immediately after an election. A Senate that is destined to lose its majority as a result of such a change is called a lame-duck Senate and often attracts criticism if it blocks Government measures introduced in the House of Representatives.

For example, after the 2004 election, it became clear that the governing Liberal Party/National Party coalition would gain a majority in the new Senate, which was due to sit the following July. In May, some months after the elections but before the new Senate came to power, the old Senate refused to pass new tax laws that had been passed by the House, which served to merely delay the passage of those laws until the new Senate assembled.

A recent example is that of minor party Family First Senator Steve Fielding who, on losing his seat at the 2010 election, threatened to block supply if the Labor Party was successful in forming a minority government. 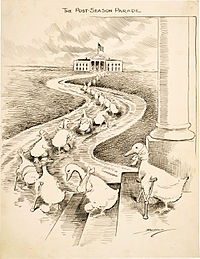 The lame ducks depicted in this Clifford K. Berryman cartoon are defeated Democrats heading to the White House hoping to secure political appointments from then President Woodrow Wilson.

In U.S. politics, the period between (presidential and congressional) elections in November and the inauguration of officials early in the following year is commonly called the lame duck period. In regard to the presidency, a president is a lame-duck after a successor has been elected, and during this time the outgoing president and president-elect usually embark on a transition of power.

Until 1933, inaugurations occurred on March 4. Congress usually had two sessions, the second of which was usually held from the December after the election of the next Congress until March. This session was commonly called the "lame duck session". Criticism of this process led to the passage of the 20th Amendment in 1933, which moved the beginning of the new Congress to January 3 and the inauguration of the president to January 20, thus shortening the lame duck period.

A president elected to a second term is sometimes seen as being a lame duck from early in the second term, because presidents are barred from contesting a term four years later, and is thus freer to take politically unpopular action. Nonetheless, as the de facto leader of his or her political party, the president's actions affect how the party performs in the midterm elections two years into the second term, and, to some extent, the success of that party's nominee in the next presidential election four years in the future.

Unlike the United States Congress, there is no "lame duck" session of Parliament in most Commonwealth countries between the general election and swearing in of elected officials. In almost all cases, the outgoing prime minister or premier hands over power directly to their designated successor after a leadership contest or general election. Usually, when the leader of a ruling party steps down, they also relinquish their caucus leadership role at around the same time, so there is no need for an interim caucus leader.

The transition between William Lyon Mackenzie King and Louis St. Laurent is perhaps the only lame duck example in Canadian federal politics. After resigning the leadership of the Liberals, King became parliamentary leader and continued as Prime Minister of Canada for some months following the leadership election of his successor, St. Laurent, who became party leader but continued as a member of King's cabinet during this time.

While Pierre Trudeau retired from politics in 1984, he directly handed power over to John Turner after the leadership contest. However, Trudeau recommended that Governor General Jeanne Sauvé appoint over 200 Liberals to well-paying patronage positions, including Senators, judges, and executives on various governmental and crown corporation boards, widely seen as a way to offer "plum jobs" to loyal party members. These appointments generated a severe backlash across the spectrum.[9] Turner had the right to recommend that the appointments be cancelled: advice that Sauvé would have been required to follow by constitutional convention. However, he let them stand and made a further 70 appointments himself.[9] Turner refused to produce a written agreement he had made with Trudeau before taking office, documenting a secret deal that saw Trudeau step down early. This is seen by many as Trudeau attempting to exercise some lame duck influence before resigning as Prime Minister. [9] [10]

On February 11, 2013, when Pope Benedict XVI announced that he was resigning within 17 days, he was called a lame-duck pope in certain parts of the media.[11] Also, due to Pope John Paul II's long and debilitating illness, some journalists (such as TIME's Jeff Israely) described the final years of his reign as a lame-duck papacy.[12]