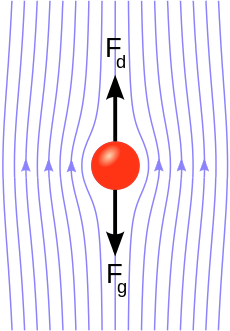 A sphere in Stokes flow, at very low Reynolds number. An object moving through a fluid experiences a force in the direction opposite to its motion.

In fluid dynamics, laminar flow (or streamline flow) occurs when a fluid flows in parallel layers, with no disruption between the layers.[1] At low velocities, the fluid tends to flow without lateral mixing, and adjacent layers slide past one another like playing cards. There are no cross-currents perpendicular to the direction of flow, nor eddies or swirls of fluids.[2] In laminar flow, the motion of the particles of the fluid is very orderly with all particles moving in straight lines parallel to the pipe walls.[3] Laminar flow is a flow regime characterized by high momentum diffusion and low momentum convection.

When a fluid is flowing through a closed channel such as a pipe or between two flat plates, either of two types of flow may occur depending on the velocity and viscosity of the fluid: laminar flow or turbulent flow. Laminar flow tends to occur at lower velocities, below a threshold at which it becomes turbulent. Turbulent flow is a less orderly flow regime that is characterised by eddies or small packets of fluid particles which result in lateral mixing.[2] In non-scientific terms, laminar flow is smooth while turbulent flow is rough.

Relationship with the Reynolds number

The specific calculation of the Reynolds number, and the values where laminar flow occurs, will depend on the geometry of the flow system and flow pattern. The common example is flow through a pipe, where the Reynolds number is defined as:

For such systems, laminar flow occurs when the Reynolds number is below a critical value of approximately 2040, through the transition range is typically between 1800 and 2100.[4]

For fluid systems occurring on external surfaces, such as flow past objects suspended in the fluid, other definitions for Reynolds numbers can be used to predict the type of flow around the object. The particle Reynolds number

would be used for particle suspended in flowing fluids, for example. As with flow in pipes, laminar flow typically occurs with lower Reynolds numbers, while turbulent flow and related phenomena, such as vortex shedding, occur with higher Reynolds numbers.

In the case of a moving plate in a liquid, it is found that there is a layer (lamina) that moves with the plate, and a layer next to any stationary plate that is stationary.

The streamlines associated with laminar flow resemble a deck of cards. This flow profile of a fluid in a pipe shows that the fluid acts in layers that slide over one another.

A common application of laminar flow is in the smooth flow of a viscous liquid through a tube or pipe. In that case, the velocity of flow varies from zero at the walls to a maximum along the cross-sectional centre of the vessel. The flow profile of laminar flow in a tube can be calculated by dividing the flow into thin cylindrical elements and applying the viscous force to them.[5]

Experimental chamber for studying chemotaxis in response to laminar flow.

Laminar airflow is used to separate volumes of air, or prevent airborne contaminants from entering an area. Laminar flow hoods are used to exclude contaminants from sensitive processes in science, electronics and medicine. Air curtains are frequently used in commercial settings to keep heated or refrigerated air from passing through doorways. A laminar flow reactor (LFR) is a reactor that uses laminar flow to study chemical reactions and process mechanisms.