From Infogalactic: the planetary knowledge core
Jump to: navigation, search
This article is about the Mediterranean island. For the Italian writer, see Giuseppe Tomasi di Lampedusa. For the animal genus, see Lampedusa (gastropod).

The comune of Lampedusa e Linosa is part of the Sicilian province of Agrigento which also includes the smaller islands of Linosa and Lampione. It is the southernmost part of Italy and Italy's southernmost island. Tunisia, which is about 113 kilometres (70 miles) away, is the closest landfall to the islands. Sicily is farther at 205 kilometres (127 miles), whilst the island nation of Malta is 176 kilometres (109 miles) to the east.[1]

Lampedusa, which has an area of 20.2 square kilometres (7.8 sq mi), has a population of approximately 6,000 people. Its main industries are fishing, agriculture, and tourism. A ferry service links the island with Porto Empedocle, near Agrigento, Sicily. There are also year-round flights from Lampedusa Airport to Palermo and Catania on the Sicilian mainland. In the summer, there are additional services to Rome and Milan, besides many other seasonal links with the Italian mainland.

Since the early 2000s, the island has become a primary European entry point for migrants, mainly coming from Africa.[2] In 2013, Rabbit Beach, located in the southern part of the island, was voted the world's best beach by travel site TripAdvisor.[3] Lampedusa has a historic claim to be part of Malta when Malta was a British colony.[4]

The name Lampedusa derives from the ancient Greek name of the island, Λοπαδούσσα or Λαπαδούσσα (Lopadoússa/Lapadoússa). It has been suggested that the name derives from the word λέπας (lépas), which means 'rock', due to the rocky landscape of the island; this word was also used by the Greeks for a kind of oyster and the island may have been called like this due to the abundance of this kind of oyster. Other scholars believe that the name derives from λαμπάς (lampás), which means 'torch', because of the lights which were placed on the island for the sailors.[5]

Historically, Lampedusa was a landing place and a maritime base for the ancient Phoenicians, Greeks, Romans and Amazighs. The Romans established a plant for the production of the prized fish sauce known as garum. In 812 (or 813),[6] directed by the Aghlabids, the island was sacked by Saracens during the ongoing Arab–Byzantine wars.[7][8] In 1553 Barbary pirates from North Africa under the command of the Ottoman Empire raided Lampedusa, and carried off 1,000 captives into slavery.[9] As a result of pirate attacks, the island became uninhabited[citation needed].

The first prince of Lampedusa and Linosa was Ferdinand Tommasi, ancestor of the famous writer Giuseppe Tomasi di Lampedusa, who received the title from Charles II of Spain in 1667.[9] A century later, the Tomassi family began a program of resettlement. 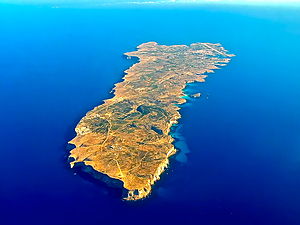 Politically, Lampedusa was also part of the Kingdom of Sicily. In the late 18th century, while Malta was still under the Knights, the Prince of Lampedusa had let the island to Salvatore Gatt, a Maltese entrepreneur, who settled on the island with a few Maltese workers.

The British considered taking over Lampedusa as a naval base instead of Malta, but the idea was dropped as the island did not have deep harbours and was not well developed. Despite this, the authorities in Malta and the British government still attempted to take over the island as they believed that it could have been used to supply Malta with food in case Sicily fell to Napoleon.

In 1800, Ball sent a Commissariat to Lampedusa to assess the feasibility of this and the result was that the island could easily be used to supply Malta with food at a relatively low cost as there was grazing ground and an adequate water supply. In 1803, some Maltese farmers settled on Lampedusa with cattle and sheep, and they began to grow barley.

In 1810, Salvatore Gatt transferred the lease to Alexander Fernandez, the British Commissariat, and the latter attempted to create a large Maltese colony on the island. This never materialized as a Royal Commission in 1812 stated that this was just a business venture and Britain refused to help Fernandez. Further problems arose when the plague devastated Malta in 1813-1814, and on 25 September 1814, Sir Thomas Maitland withdrew British troops from Lampedusa.

Fernandez remained proprietor of the island until 1818, when Gatt returned and remained there with his family up to 1824.[4]

In June 1943, during the Second World War, as a precursor to the Allied invasion of Sicily, the island was secured without resistance in Operation Corkscrew by the Royal Navy destroyer HMS Lookout and ninety-five men of the 2nd Battalion the Coldstream Guards. (Mussolini had given the garrison his permission to surrender because it lacked any water.) White flags had been sighted in the port, and when Lieutenant Corbett of Lookout approached the port in a motor launch, he was told that the island's garrison wished to surrender.[10] The Governor's formal surrender was accepted in the island's underground command-post by a combined Army/Navy delegation sometime before 9:00 pm on 12 June 1943. During this process, the governor handed his sword to the Coldstream company commander, Major Bill Harris.[11] A second unofficial claim has also been made regarding the capitulation of the island, when earlier that same day elements of the garrison had also attempted to surrender in unusual circumstances when Sergeant Sydney Cohen, the pilot of a Royal Air Force Supermarine Walrus aircraft landed having run low on fuel and suffering problems with his compass.[12] Cohen's exploits were commemorated in a Yiddish play The King Of Lampedusa that ran for six months.[13]

In 1972, part of the western side of the island became a United States Coast Guard LORAN-C transmitter station. In 1979, Lt. Kay Hartzell took command of the Coast Guard base, becoming "the first female commanding officer of an isolated duty station".[14]

The 1980s, and especially 1985 -1986, saw an increase in tensions and the area around the island was the scene of multiple attacks. On April 15, 1986, Libya fired two Scuds at the Lampedusa navigation station on the island, in retaliation for the American bombing of Tripoli and Benghazi, and the alleged death of Colonel Gaddafi's adopted daughter. However, the missiles passed over the island, landed in the sea, and caused no damage.[15]

On 4 January 1989, U.S. Navy aircraft from the carrier USS John F. Kennedy shot down two Libyan fighters approximately 200 kilometres (124 miles) from the island.[16] The base commander was advised by U.S. Sixth Fleet Intelligence at La Maddalena that the Libyan president, Muammar al-Gaddafi, had threatened reprisals against the American commanders at Sigonella and Lampedusa.[17] An Italian media frenzy followed that event which put Lampedusa in the spotlight.[18]

The NATO base was decommissioned in 1994 and transferred to Italian military control.[citation needed] 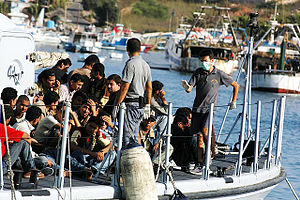 Migrants arriving on the Island of Lampedusa in August 2007

Since the early 2000s, Lampedusa, the European territory closest to Libya, has become a prime transit point for irregular immigrants from Africa, the Middle East and Asia wanting to enter Europe. In 2004 the Libyan and Italian governments reached a secret agreement that obliged Libya to accept African immigrants deported from Italian territories. This resulted in the mass repatriation of many people from Lampedusa to Libya between 2004 and 2005, a move criticised by the European Parliament.[19]

By 2006, many African immigrants were paying people smugglers in Libya to help get them to Lampedusa by boat.[20] On arrival, most were then transferred by the Italian government to reception centres in mainland Italy. Many were then released because their deportation orders were not enforced.[21]

In 2009, the overcrowded conditions at the island's temporary immigrant reception centre came under criticism by the United Nations High Commissioner for Refugees (UNHCR). The unit, which was originally built for a maximum capacity of 850 people, was reported to be housing nearly 2,000 boat people. A significant number of people were sleeping outdoors under plastic sheeting.[22] A fire that started during an inmate riot destroyed a large portion of the holding facility on 19 February 2009.[citation needed]

In 2011, many more immigrants moved to Lampedusa during the rebellions in Tunisia and Libya.[23] By May 2011, more than 35,000 immigrants had arrived on the island from Tunisia and Libya.[24] By the end of August, 48,000 had arrived.[25] Most were young males in their 20s and 30s.[26] The situation has caused division within the EU, the French government regarding most of the arrivals as economic migrants rather than refugees in fear of persecution.[27] Italy has repeatedly requested aid from the EU in managing refugees, but has been turned down.

In July 2013, Pope Francis visited the island on his first official visit outside of Rome. He prayed for migrants, living and dead, and denounced their traffickers.[28] In October 2013, the 2013 Lampedusa disaster occurred; a boat carrying over 500 migrants, mostly from Eritrea and Somalia, sank off the coast of Lampedusa with the deaths of at least 300 people.[29][30]

From January to April 2015, about 1600 migrants died on the route from Libya to Lampedusa, making it the deadliest migrant route in the world.[31]

Lampedusa is the southernmost point of the Republic of Italy. It is also Italy's southernmost island. Politically and administratively, Lampedusa is part of Italy, but geologically it belongs to Africa since the sea between the two is no deeper than 120 metres. Lampedusa is an arid island, dominated by a garigue landscape, with maquis shrubland in the west. It has no sources of water other than irregular rainfall. Overall the island has two slopes, from west to east, and from north to south of the island. The south-western side is dominated by deep gorges, while the southeastern part is dominated by shallow valleys and sandy beaches. The entire northern coast is dominated by cliffs: gently sloping cliffs on the east coast, and vertical sheer cliffs on the west coast.

The fauna and flora of Lampedusa are similar to those of North Africa, with a few pelagic endemic species.[citation needed] The Isola dei Conigli (literally "Rabbit Island"), close to the south coast of Lampedusa, is one of the last remaining egg-laying sites in Italy for the Loggerhead Sea Turtle, which is endangered throughout the Mediterranean. The beach and the neighbouring island are part of a nature reserve: here the singer-songwriter Domenico Modugno spent his vacations, and died in 1994. Next to Parise Cape is a small beach accessible only by sea, through a low grotto. Other species living along the island's coast include mantas and dolphins. Recent studies revealed that the waters of Lampedusa are a wintering feeding ground for the Mediterranean group of fin whales.[32][33] Humpback whale, a species used to be considered as a vagrant species in to the Mediterranean basin, has been seen around the island in recent years.[34]