The Lancashire and Cheshire Miners' Federation (LCMF) was a trade union that operated on the Lancashire Coalfield in North West England from 1881 until it became the Lancashire area of the National Union of Mineworkers in 1945.

Colliery owners fended off unions until well into the 19th century and trade unionism was slow to take a hold on the Lancashire Coalfield. Wages were poor and employers arbitrarily fined men for minor reasons, disallowed wages on false pretexts and victimised perceived radicals. Bonds, a system of hiring that legally tied miners to their job for a year, were used to enforce discipline. Miners protested about poor wages in 1757 when bread prices rose and some marched from Kersal towards Manchester in protest, but were turned back. When trouble flared, the Home Secretary ordered troops to be ready to quell unrest. Long strikes were unsustainable as the miners had no organisation or finances to back them. The first miners' association was the Brotherly Union Society formed in Pemberton, Wigan in 1794. It was described as a friendly society to avoid prosecution under the Combination Acts and in the early-19th century there were 21 such societies in central Lancashire.[1]

Strikes in the first quarter of the 19th century generally failed to improve pay and conditions. In 1830 miners formed the Friendly Society of Coal Mining with headquarters in Bolton. The organisation was based on local branches with delegates attending quarterly meetings.[2] The coal owners were not sympathetic and when the men went on strike to assert their right to organise, William Hulton issued a pamphlet condemning his workforce who he considered had: "wantonly injured me to the fll limits of your ability, in my purse, and you have much farther wounded my feelings".[3]

The Miners' Association of Great Britain and Ireland was established at a meeting in Wakefield in 1842 and lasted for seven years. It supported the commission headed by Lord Anthony Ashley-Cooper, 7th Earl of Shaftesbury and the passing of the Coal Mines Act 1842 which prohibited all females and boys under ten working underground.[4] The association had 100,000 members and was involved in lobbying parliament and preventing persecution by tyrannical employers.[5] The association was initially strongest in Yorkshire and the North-East and held a public meeting at Kersal in 1843 that was attended by 150 miners. Its general-secretary, David Swallow, considered the Lancashire miners to be among the worst paid in the country and attempted to address miners in Westhoughton, but the mineowners, including William Hulton, prevented him from holding a meeting. Lord Francis Egerton employed 1,300 workers, paying them little more than if they were in the workhouse.[6] Opposition from the coal owners did not prevent the association recruiting members and 98 lodges were formed in Lancashire and Cheshire by October 1843. Lancashire miners were poorly paid compared with other coalfields and antagonisms arose between the workers and the union.

The federation was founded in 1881 in the aftermath of a bitter seven-week strike that was frequently violent. Thomas Ashton, secretary of the Ashton-under-Lyne area, organised a meeting at the old Manchester Town Hall that led to the merger of several district unions on the Lancashire Coalfield.[7] Not all joined and a further meeting was arranged in Wigan later in the year. The union was plagued with rivalries, between the different areas and the personalities that emerged in its leadership.[8] In the aftermath of the strike, funds were exhausted and its organisation chaotic. Sam Woods was elected the miners' agent and needed to unite the districts so that the fledgling union did not disintegrate. Robert Isherwood, secretary and agent for the Tyldesley Miners' Association, was its first treasurer.[9]

In 1888, the union called a national conference, which led to the formation of the Miners Federation of Great Britain (MFGB) the following year.[15] Of the fifty delegates at the Newport meeting at which the MFGB was formed, 19 of the 50 delegates were from Lancashire.[16] In 1897, some small affiliates merged into the central organisation, which began representing their former members directly.[9]

Sam Woods, was elected as a Lib-Lab MP in the 1892 UK general election.[17] In 1903, the union affiliated to the Labour Representation Committee, by far the most important miners' union to join at that time.[18] Stephen Walsh was appointed agent of the LCMF in 1901 and, sponsored by the federation, fought for and won the Ince seat at the 1906 General Election. 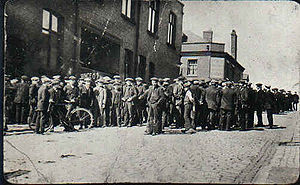 Miners outside Tyldesley Miners Hall during the 1926 general strike

Membership rose rapidly, reaching over 70,000 by 1907.[17] In 1913 Thomas Greenall, President and Thomas Ashton, Secretary, laid foundation stones in Bridgeman Place, Bolton for stone and brick headquarters designed by Bolton architects Bradshaw, Gass & Hope.[19] Pit brow women were admitted as members of the Federation after the first World War although work at collieries was considered an unsuitable job for women.[20]

The Lancashire miners were not considered as militant as their counterparts on other coalfields but were involved in disputes both locally and nationally.[21]

After the formation of the National Union of Mineworkers in 1945, the LCMF became its Lancashire area which subsequently merged with the Cumberland Area to form the North West Area.