Lancelot Andrewes (1555 – 25 September 1626) was an English bishop and scholar, who held high positions in the Church of England during the reigns of Elizabeth I and James I. During the latter's reign, Andrewes served successively as Bishop of Chichester, of Ely and of Winchester and oversaw the translation of the King James Version of the Bible (or Authorized Version). In the Church of England he is commemorated on 25 September with a Lesser Festival.

Andrewes was born in 1555 near All Hallows, Barking, by the Tower of London, of an ancient Suffolk family later domiciled at Chichester Hall, at Rawreth in Essex; his father, Thomas, was master of Trinity House. Andrewes attended the Cooper's free school, Ratcliff, in the parish of Stepney and then the Merchant Taylors' School under Richard Mulcaster. In 1571 he entered Pembroke Hall, Cambridge and graduated with a Bachelor of Arts degree, proceeding to a Master of Arts degree in 1578.[1] His academic reputation spread so quickly that on the foundation in 1571 of Jesus College, Oxford he was named in the charter as one of the founding scholars "without his privity" (Isaacson, 1650); his connection with the college seems to have been purely notional, however.[2] In 1576 he was elected fellow of Pembroke College, Cambridge; on 11 June 1580 he was ordained a priest by William Chaderton, Bishop of Chester[3] and in 1581 was incorporated Master of Arts (MA) at Oxford. As catechist at his college he read lectures on the Decalogue (published in 1630), which aroused great interest.

Once a year he would spend a month with his parents, and during this vacation, he would find a master from whom he would learn a language of which he had no previous knowledge. In this way, after a few years, he acquired most of the modern languages of Europe.[4]

Andrewes was the brother of the scholar and cleric Roger Andrewes who also served as a translator for the King James Version of the Bible.

In 1588, following a period as chaplain to Henry Hastings, 3rd Earl of Huntingdon, President of the North, he became vicar of St Giles, Cripplegate in the City of London, where he delivered striking sermons on the temptation in the wilderness and the Lord's Prayer. In a great sermon (during Easter week) on 10 April 1588, he stoutly vindicated the Reformed character of the Church of England against the claims of Roman Catholicism and adduced John Calvin as a new writer, with lavish praise and affection.

Through the influence of Francis Walsingham, Andrewes was appointed prebendary of St Pancras in St Paul's, London, in 1589, and subsequently became Master of his own college of Pembroke, as well as a chaplain of Archbishop John Whitgift. From 1589 to 1609 he was prebendary of Southwell. On 4 March 1590, as a chaplain of Elizabeth I, he preached before her an outspoken sermon and, in October that year, gave his introductory lecture at St Paul's, undertaking to comment on the first four chapters of the Book of Genesis. These were later compiled as The Orphan Lectures (1657).

Andrewes liked to move among the people, yet found time to join a society of antiquaries, of which Walter Raleigh, Sir Philip Sidney, Burleigh, Arundel, the Herberts, Saville, Stow and Camden were members. Queen Elizabeth had not advanced him further on account of his opposition to the alienation of ecclesiastical revenues. In 1598 he declined the bishoprics of Ely and Salisbury, because of the conditions attached. On 23 November 1600, he preached at Whitehall a controversial sermon on justification. In July 1601 he was appointed dean of Westminster and gave much attention to the school there.

During the reign of James I 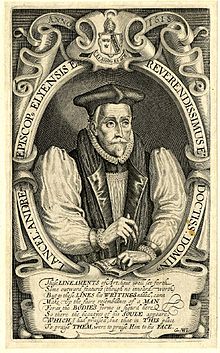 On the accession of James I, to whom his somewhat pedantic style of preaching recommended him, Andrewes rose into great favour. He assisted at James's coronation, and in 1604 took part in the Hampton Court Conference.

Andrewes' name is the first on the list of divines appointed to compile the Authorized Version of the Bible. He headed the "First Westminster Company" which took charge of the first books of the Old Testament (Genesis to 2 Kings). He acted, furthermore, as a sort of general editor for the project as well.

On 31 October 1605 his election as Bishop of Chichester was confirmed, he was consecrated a bishop on 3 November, installed at Chichester Cathedral on 18 November[3] and made Lord High Almoner (until 1619).[5] Following the discovery of the Gunpowder Plot Andrewes was asked to prepare a sermon to be presented to the king in 1606 (Sermons Preached upon the V of November, in Lancelot Andrewes, XCVI Sermons, 3rd. Edition (London,1635) pp. 889,890, 900-1008 ). In this sermon Lancelot Andrewes justified the need to commemorate the deliverance and defined the nature of celebrations. This sermon became the foundation of celebrations which continue 400 years later.[6] In 1609 he published Tortura Torti, a learned work which grew out of the Gunpowder Plot controversy and was written in answer to Bellarmine's Matthaeus Tortus, which attacked James I's book on the oath of allegiance. After moving to Ely[3] (his election to that See was confirmed on 22 September),[5] he again controverted Bellarmine in the Responsio ad Apologiam.

In 1617 he accompanied James I to Scotland with a view to persuading the Scots that Episcopacy was preferable to Presbyterianism. He was made dean of the Chapel Royal and translated (by the confirmation of his election to that See in February 1619)[5] to Winchester, a diocese that he administered with great success. Following his death in 1626 in his Southwark palace, he was mourned alike by leaders in Church and state, and buried by the high altar in St Saviour's (now Southwark Cathedral, then in the Diocese of Winchester). 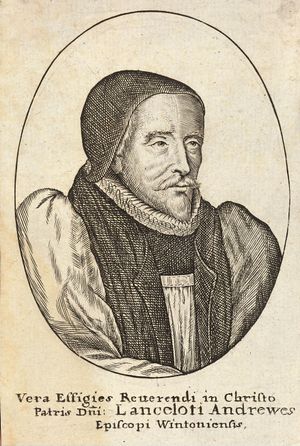 Portrait of Bishop Andrewes by Hollar

Two generations later, Richard Crashaw caught up the universal sentiment, when in his lines "Upon Bishop Andrewes' Picture before his Sermons" he exclaims:

This reverend shadow cast that setting sun,
Whose glorious course through our horizon run,
Left the dim face of this dull hemisphere,
All one great eye, all drown'd in one great teare.

Andrewes was a friend of Hugo Grotius, and one of the foremost contemporary scholars, but is chiefly remembered for his style of preaching. As a churchman he was typically Anglican, equally removed from the Puritan and the Roman positions. A good summary of his position is found in his First Answer to Cardinal Perron, who had challenged James I's use of the title "Catholic". His position in regard to the Eucharist is naturally more mature than that of the first reformers.

As to the Real Presence we are agreed; our controversy is as to the mode of it. As to the mode we define nothing rashly, nor anxiously investigate, any more than in the Incarnation of Christ we ask how the human is united to the divine nature in One Person. There is a real change in the elements—we allow ut panis iam consecratus non sit panis quem natura formavit; sed, quem benedictio consecravit, et consecrando etiam immutavit. (Responsio, p. 263).

By the same rules that the Passover was, by the same may ours be termed a sacrifice. In rigour of speech, neither of them; for to speak after the exact manner of divinity, there is but one only sacrifice, veri nominis, that is Christ's death. And that sacrifice but once actually performed at His death, but ever before represented in figure, from the beginning; and ever since repeated in memory to the world's end. That only absolute, all else relative to it, representative of it, operative by it ... Hence it is that what names theirs carried, ours do the like, and the Fathers make no scruple at it—no more need we.(Sermons, vol. ii. p. 300). 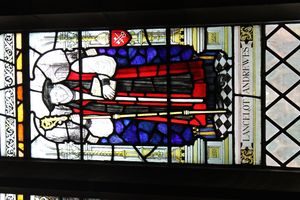 Andrewes preached regularly and submissively before King James and his court on the anniversaries of the Gowrie Conspiracy and the Gunpowder Plot. These sermons were used to promulgate the doctrine of the Divine Right of Kings.

His Life was written by Whyte (Edinburgh, 1896), M. Wood (New York, 1898), and Ottley (Boston, 1894). His services to his church have been summed up thus: (1) he has a keen sense of the proportion of the faith and maintains a clear distinction between what is fundamental, needing ecclesiastical commands, and subsidiary, needing only ecclesiastical guidance and suggestion; (2) as distinguished from the earlier protesting standpoint, e.g. of the Thirty-nine Articles, he emphasized a positive and constructive statement of the Anglican position.

His best-known work is the Preces Privatae or Private Prayers, edited by Alexander Whyte (1896),[7] which has widespread appeal and has remained in print since renewed interest in Andrewes developed in the 19th century. The Preces Privatae were first published by R. Drake in 1648; an improved edition by F. E. Brightman appeared in 1903.[8] Andrewes's other works occupy eight volumes in the Library of Anglo-Catholic Theology (1841 – 1854). Ninety-six of his sermons were published in 1631 by command of King Charles I, have been occasionally reprinted, and are considered among the most rhetorically developed and polished sermons of the late-sixteenth and early-seventeenth centuries. Because of these, Andrewes has been commemorated by literary greats such as T. S. Eliot.

Andrewes was considered, next to Ussher, to be the most learned churchman of his day, and enjoyed a great reputation as an eloquent and impassioned preacher, but the stiffness and artificiality of his style render his sermons unsuited to modern taste. Nevertheless, there are passages of extraordinary beauty and profundity. His doctrine was High Church, and in his life he was humble, pious, and charitable. He continues to influence religious thinkers to the present day, and was cited as an influence by T. S. Eliot, among others. Eliot also borrowed, almost word for word and without his usual acknowledgement, a passage from Andrewes' 1622 Christmas Day sermon for the opening of his poem "Journey of the Magi". In his 1997 novel Timequake, Kurt Vonnegut suggested that Andrewes was "the greatest writer in the English language," citing as proof the first few verses of the 23rd Psalm. His translation work has also led him to appear as a character in three plays dealing with the King James Bible, Howard Brenton's Anne Boleyn (2010), Jonathan Holmes' Into Thy Hands (2011) and David Edgar's Written on the Heart (2011).

He has an academic cap named after him, known as the Bishop Andrewes cap, which is like a mortarboard but made of velvet, floppy and has a tump or tuff instead of a tassel. This was in fact the ancient version of the mortarboard before the top square was stiffened and the tump replaced by a tassel and button. This cap is still used by Cambridge DDs and at certain institutions as part of their academic dress.