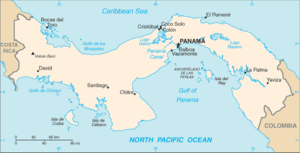 The Isthmus of Panama is a land bridge whose appearance 3 million years ago allowed the Great American Interchange.

A land bridge, in biogeography, is an isthmus or wider land connection between otherwise separate areas, over which animals and plants are able to cross and colonise new lands. A land bridge can be created by marine regression, in which sea levels fall, exposing shallow, previously submerged sections of continental shelf; or when new land is created by plate tectonics; or occasionally when the sea floor rises due to post-glacial rebound after an ice age.

In the 19th century a number of scientists noted puzzling geological and zoological similarities between widely separated areas. To solve these problems, "…whenever geologists and paleontologists were at a loss to explain the obvious transoceanic similarities of life that they deduced from the fossil records, they sharpened their pencils and sketched land bridges between appropriate continents."[1] The concept was first proposed by Jules Marcou in Lettres sur les roches du Jura et leur distribution géographique dans les deux hémisphères ("Letters on the rocks of the Jura [Mountains] and their geographic distribution in the two hemispheres", 1857-1860.[2]

All of these became obsolete with the gradual acceptance of continental drift and the development of plate tectonics by the mid-20th century.