Land of Hope and Glory

Land of Hope and Glory sung by Clara Butt in 1911

"Land of Hope and Glory" is a British patriotic song, with music by Edward Elgar and lyrics by A. C. Benson, written in 1902. 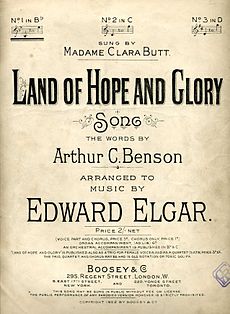 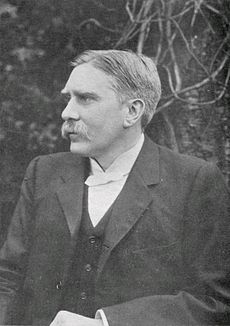 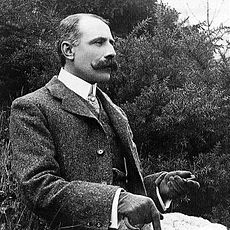 The music to which the words of the refrain "Land of Hope and Glory, &c"[1] below are set is the "trio" theme from Edward Elgar's Pomp and Circumstance March No. 1.[2] The words were fitted to the melody on the suggestion of King Edward VII who told Elgar he thought the melody would make a great song. When Elgar was requested to write a work for the King's coronation, he worked the suggestion into his Coronation Ode, for which he asked the poet and essayist A. C. Benson to write the words.[2] The last section of the Ode uses the march's melody.

Due to the King's illness, the coronation was postponed. Elgar created a separate song, which was first performed by Madame Clara Butt in June 1902. In fact, only the first of the seven stanzas of the Ode's final section was re-used, as the first four lines of the second stanza below. This stanza is the part which is popularly sung today.

Solo
Dear Land of Hope, thy hope is crowned,
God make thee mightier yet!
On Sov'ran[3] brows, beloved, renowned,
Once more thy crown is set.
Thine equal laws, by Freedom gained,
Have ruled thee well and long;
By Freedom gained, by Truth maintained,
Thine Empire shall be strong.

Solo
Thy fame is ancient as the days,
As Ocean large and wide:
A pride that dares, and heeds not praise,
A stern and silent pride;
Not that false joy that dreams content
With what our sires have won;
The blood a hero sire hath spent
Still nerves a hero son.

The writing of the song is contemporaneous with the publication of Cecil Rhodes' will—in which he bequeathed his considerable wealth for the specific purpose of promoting "the extension of British rule throughout the world", and added a long detailed list of territories which Rhodes wanted brought under British rule and colonised by British people. The reference to the extension of the British Empire's boundaries may reflect the Boer War, recently won at the time of writing, in which the United Kingdom gained further territory, endowed with considerable mineral wealth.[4]

Prior to 2010, "Land of Hope and Glory" was used as the victory anthem of England team at the Commonwealth Games.[8]

On St George's Day, 23 April 2010, the Commonwealth Games Council for England launched a poll to allow the public to decide which anthem would be played at the 2010 Commonwealth Games in Delhi, India. Voters chose between "God Save the Queen", "Jerusalem" and "Land of Hope and Glory" with the winning song, "Jerusalem", being adopted as the official anthem for Team England.[9]

"Land of Hope and Glory" has traditionally been sung as the first song amidst flag-waving at the climax of the Last Night of the Proms.

"Land of Hope and Glory" was sung by Jeanette MacDonald in the 1941 MGM film, Smilin' Through.

The song inspired the rather ironic title of the 1987 film Hope and Glory, depicting WWII through the eyes of a 10-year-old boy.

The song is also used in the 2012 Japanese film Little Maestra. It is set in a small fishing village in Shikamachi, Ishikawa Prefecture, who depend on the local amateur orchestra as their favorite source of entertainment. When the conductor dies unexpectedly, the townspeople recruit the man’s granddaughter, a high school student with a talent for conducting. The song is heard three times throughout the movie.

In the United States and Canada the instrumental version of this song is traditionally associated with high school and college (university) graduations. It is played as a processional or recessional. During ceremonies for larger schools this piece is played repeatedly. It may be played for as long as the graduates are walking, which can be longer than some symphonies.

It was the entrance music of American professional wrestler Randy "Macho Man" Savage, who died in 2011.