The three lands of Sweden

The lands of Sweden are three traditional parts, essentially three collectives of provinces, in Sweden. These "lands" have no administrative function, and there is no official designation for this subdivision level. Most commonly they are called "landsdelar", which simply translates to "parts of the country".

Although they have no administrative functions and no coats of arms these three subdivisions are used in weather reports. Their boundaries can therefore be seen on weather maps on television and in the press.

Areas and populations of the lands: 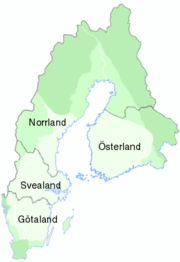 The former lands of Sweden

Sweden was historically divided into the four lands: Götaland, Svealand, Norrland and Österland.

After the Finnish War (1808–1809) the eastern part of Sweden was ceded to Russia, thus becoming the Imperial Russian Grand Duchy of Finland, with Norrland divided between these two states. The Swedish portion of Norrland still represents more than half of Sweden's territory; it remains, however, sparsely populated compared to the south and middle. The town of Stockholm, which earlier had been at the centre of the medieval provinces of Sweden (i.e. the brightest area on the map), now was situated on the eastern edge of the realm.

Media related to Category:Lands of Sweden at Wikimedia Commons