Landsberg Prison is a penal facility located in the town of Landsberg am Lech in the southwest of the German state of Bavaria, about 65 kilometres (40 mi) west of Munich and 35 kilometres (22 mi) south of Augsburg.

The prison was used by Allied power during the Occupation of Germany for holding Nazi War Criminals. In 1946 General Joseph T. McNarney, commander in chief, U.S. Forces of Occupation in Germany renamed Landsberg: War Criminal Prison Nr. 1. The Americans closed the war crimes facility in 1958. Control of the prison was then handed over to the Federal Republic of Germany.

Landsberg is now maintained by the Prison Service of the Bavarian Ministry of Justice.

Landsberg prison, which is in the town's western outskirts, was completed in 1910. The facility was designed with an Art Nouveau frontage by Hugo Höfl. Within its wall, the four brick-built cell blocks were constructed in a cross-shape orientation. This allowed guards to watch all wings simultaneously from a central location (based on the Panopticon style).

Landsberg, which was used for holding convicted criminals and those awaiting sentencing, was also designated a Festungshaft (meaning fortress confinement) prison. Festungshaft facilities were similar to a modern protective custody unit. Prisoners were excluded from forced labor and had reasonably comfortable cells. They were also allowed to receive visitors. Anton Graf von Arco-Valley who shot Bavarian prime minister Kurt Eisner was given a Festungshaft sentence in February 1919.

In 1924 Adolf Hitler spent 264 days incarcerated in Landsberg after being convicted of treason following the Beer Hall Putsch in Munich the previous year. During his imprisonment, Hitler dictated and then wrote his book Mein Kampf with assistance from his deputy, Rudolf Hess. 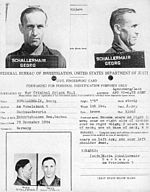 Record card of former SS-Hauptscharführer de (Georg Schallermair) who worked at the Mühldorf subcamp. After he was sentenced to death at the Dachau Trials, Schallermair was hanged at Landsberg in 1951. 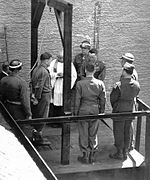 NSDAP Kreisleiter Franz Strasser, shortly before being hanged on January 2, 1946. He was sentenced to death during the Dachau Trials for killing five American POWs.

During the occupation of Germany by the Allies after World War II, the US Army designated the prison as War Criminal Prison No. 1 to hold convicted Nazi war criminals.[1] It was run and guarded by personnel from the United States Military Police (MPs).

The first condemned prisoners arrived at Landsberg prison in December 1945. These war criminals had been sentenced to death for crimes against humanity at the Dachau Trials which had begun a month earlier.

Between 1945 and 1946, the prison housed a total of 110 prisoners convicted at the Nuremberg trials, a further 1416 war criminals from the Dachau trials and 18 prisoners convicted in the de (Shanghai trials). (These were military tribunals conducted by the American forces in Japan between August 1946 and January 1947 to prosecute 23 German officials who had continued to assist the Japanese military in Shanghai after the surrender of Nazi Germany.) [2]

In five and half years, Landsberg prison was the place of execution of nearly 300 condemned war criminals. 259 death sentences were conducted by hanging and 29 by firing squad.[3] Executions were carried out expeditiously. In May 1946 twenty eight former SS guards from Dachau were hanged within a four-day period.[4] Bodies that were not claimed were buried in unmarked graves in the cemetery next to the Spöttingen chapel.

Former members of the Third Reich who were sent to the US Army's prison at Landsberg included:

By 1948, the Bavarian Ministry of Justice's Association for the Welfare of Prisoners (Vereinigung für die Wohlfahrt von Gefangenen des Bayerischen Staatsministeriums der Justiz) managed the need of the prisoners held by the American military. With foundation of the Federal Republic of Germany in May 1949 and its abolishment of the death penalty, calls from politicians, the churches, industrialists, and artists resulted in numerous petitions being made to close down War Criminal Prison No. 1. as part of a general effort to bring freedom for all Germans convicted of war crimes.[5]:177–178 In the last half of 1950 and the first half of 1951, thousands of Germans took part in demonstrations outside of Landsberg prison to demand pardons for all of the war criminals while the German media coverage was overwhelmingly on the side of the condemned, who were depicted as the innocent victims of American "lynch law".[5]:156–159 Though the protestors at Landsberg claimed to be only motivated by opposition to the death penalty and to not have any pro-Nazi or anti-Semitic feelings, their actions belied their words. When a group of Jewish protestors arrived at Landsberg demanding the execution of the 102 war criminals on 7 January 1951, the German protestors demanding amnesty began to chant the Nazi era slogan "Juden raus! Juden raus!" ("Jews out! Jews out!") and then proceed to beat up the Jewish protestors.[5]:158 The German historian Norbert Frei observed that most of the politicians who demanded freedom for condemned prisoners at Landsberg at various protest rallies outside of the prison such as Richard Jaeger of the CSU, later on became prominent advocates of restoring the death penalty, which strongly suggested that what people like Jaeger objected to was not so much the death penalty, but rather the use of the death penalty against Nazi war criminals.[5]:158 Another politician who spoke at the protest rallies outside of Landsberg prison was Gebhard Seelos of the Bavaria Party, who called the prisoners of Landsberg together with Helgoland -which was being used as target practice by the RAF-to be "beacons of the German Volk in their struggle for justice, peace and the reconciliation of nations".[5]:158 Seelos then went on to compare the suffering of the condemned prisoners at Landsberg with that of the six million Jews killed in the Holocaust, and argued that to execute the prisoners on death row at Landsberg would be an act every bit as "inhumane" as the Holocaust.[5]:158 Seelos's speech drew a loud applause from the crowd.[5]:158 Frei called Seelos's speech with its claim that the war criminals facing execution at Landsberg were just as much victims as the Jews that they killed in the Holocaust a "breathtaking" exercise in moral equivalence.[5]:158

In early 1951 the Bavarian parliament passed a resolution declaring that all military prisoners at Landsberg, Werl, and Wittlich should be recognized as POWs making them the financial responsibility of the Federal German government. On 2 January 1951, the West German Chancellor Konrad Adenauer met with U.S. High Commissioner for Germany, John J. McCloy to argue that the status of the Landsberg prisoners was not so much a legal question as a political one, and that to execute the Landsberg prisoners would ruin forever any effort at having the Federal Republic play its role in the Cold War.[5]:157 On 31 January 1951 McCloy under very strong pressure from German public opinion, agreed to review the sentences from the Nuremberg and Dachau trials. Out of 28 prisoners condemned to death, seven death sentences were confirmed. In some cases like the industrialist Alfried Krupp von Bohlen und Halbach were pardoned by McCloy.[5]:164–165 The other sentences were reduced to terms of imprisonment. The seven death sentences confirmed by McCloy were the so-called "worst of the worst" at Landsberg, namely Oswald Pohl, Paul Blobel, Otto Ohlendorf, Werner Braune, Eric Naumann, de (Georg Schallermair) (an SS sergeant at Mühldorf, a Dachau sub-camp). and de (Hans Hermann Schmidt) (adjutant of Buchenwald).[5]:165 Neither Adenauer nor German public opinion was satisfied by McCloy's decision, and as a result, throughout the first half of 1951 the Federal Republic continued to lobby McCloy to pardon the seven condemned men while the huge demonstrations for amnesty continued at Landsberg, demanding freedom for the "Landsberg Seven".[5]:168–169 The final executions were conducted on 7 June 1951.

By the middle of the fifties, these inmates began to be seen not as war criminals but as political prisoners or prisoners of war. For instance, in 1955, the city council of Landsberg asked their mayor "to work for the overdue release of the political prisoners" in the Landsberg prison. Moreover the FDR government in Bonn decided the convictions of war criminals by military courts were considered as foreign convictions and therefore did not become part of an individual' s criminal record.

In May 1958, the United States Army relinquished control of Landsberg Prison when the last four prisoners were released from custody. These were all former SS high-ranking officers who had been convicted during the Einsatzgruppen Trials between 1947 and 1948.

Management of the facility was transferred over to the civilian Bavarian Ministry of Justice.

The prison is now run as a progressive correctional facility that provides training, skills and medical help for prisoners. There are 36 courses in the central training centre which provide training for occupations such as bakers, electricians, painters, butchers, carpenters, tailors, shoemakers, heating & ventilation workers and bricklayers. Uli Hoeneß is serving out his sentence for tax fraud in Landsberg Prison.

Media related to Prison in Landsberg am Lech at Wikimedia Commons