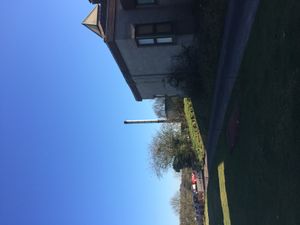 Langleybury is a country house and estate in Abbots Langley, Hertfordshire, England, situated 2 miles north of the town of Watford on a low hill above the valley of the River Gade.

The estate was purchased in 1711 by Robert Raymond, then Solicitor General and later Attorney General, subsequently Baron Raymond, who was Lord Chief Justice of England and Wales from 1724 until 1732.[1]

In 1720 he demolished the original house, of which little is known, and built a mansion which still stands on the site today. A park was laid out around the house in the later eighteenth century. His cipher, a griffin in a crown, can still be seen on the building.

On the death of his son, Robert Raymond, 2nd Baron Raymond, without issue in 1756, the manor was left to Sir Beversham Filmer, 5th Baronet, of East Sutton, Kent.[2] He, dying unmarried in 1763, bequeathed it to his nephew, Sir John Filmer (7th Bt[2]). It then descended in the family till 1838.[1] The Filmers were absentee landlords.

In 1762 the road at the lower edge of the park became the Sparrows Herne turnpike, and in the 1790s the Grand Junction Canal was dug along the valley bottom alongside the road.

In 1838 Sir Edmund Filmer (8th Bt[2]) sold the estate to Edmund Fearnley Whittingstall (né Fearnley), a Watford brewer.[1][3] He started a bank in partnership with William Smith which went into bankruptcy soon after Whittingstall's death, forcing the sale of the estate in 1856.[4]

His son, Edward Henry Loyd, was High Sheriff of Hertfordshire in 1894.[6] During the Second World War the house was leased to the Equity and Law Insurance Company.[10]

In 1947 the estate was sold to Hertfordshire County Council who converted the house and grounds into a secondary school, named Langleybury School, which opened in 1949.[10] In the late 1950s a modern school was built to the south of the mansion, which remained in use as part of the school and as teacher accommodation.

It is also used as a CCB (close combat battle) area for people who play Airsoft (an outdoor combat game) in the buildings which are still safe to enter.

A children’s farm is situated in the old farm attached to the mansion house.