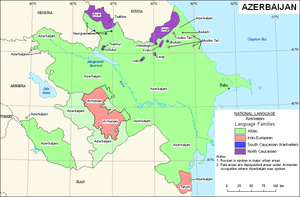 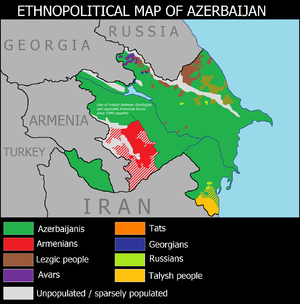 Several languages are native to the territory of the Republic of Azerbaijan.

The primary and official language of Azerbaijan is Azerbaijani, Azeri,[1] a Turkic language closely related to and partially mutually intelligible (between 33 and 65%) with Modern Turkish.[2] According to the 2009 census of the country it is spoken as a native language by 92.5% of the population[3] whereas Russian and English play significant roles as languages of education and communication. The large Armenian-speaking population of Nagorno-Karabakh is no longer under government control. Lezgian, Talysh, Avar, Georgian, Budukh,[4] Juhuri,[4] Khinalug,[4] Kryts,[4] Rutul,[4] Tsakhur,[4] Tat,[4] and Udi[4] are all spoken by minorities.

All these[5] (with the exception of Armenian, Lezgian, Talysh, Avar, and Georgian, which have much larger number of speakers outside Azerbaijan, but nevertheless are steadily declining within Azerbaijan) above-mentioned languages are endangered languages which are threatened with extinction, as they are spoken by few (less than 10,000) or very few (less than 1,000) people and their usage is steadily declining with emigration and modernisation.

An entire issue of the International Journal of the Sociology of Language, edited by Jala Garibova, was devoted to the matter of languages and language choices in Azerbaijan, vol. 198 in 2009.

The medieval author Ibn al-Nadim, in his book Al-Fihrist mentions that all the Median and Persian lands of antiquity (including what is today the Republic of Azerbaijan) spoke one language. There, he quotes the great scholar Abdullah Ibn al-Muqaffa:

Etymological studies also further indicate that current dialects spoken from Baku through Khalkhal to Semnan, all originated from a common source. In other words, the people of ancient Azerbaijan spoke the same language spoken by the Medes[clarification needed]. (See Columbia University's distinguished professor Ehsan Yarshater's report in: Majjaleh-ye Daaneshkadehye Adabiyaat, 5, No 1-2, p35-37)

The medieval historian Yaqut al-Hamawi also used the phrase Al-ajam-ol-Azariyah ("The Azeri Iranian") in his books Mo'ajjem ol-Odabaa and Mo'jem ol Baladaan. In other sources such as Surat-ol-Arz by Ebne Hoghel, Ahsan ol-Taqaaseem by Moqaddasi, and Masaalik va Mamaalik by Istakhri, the people of Azerbaijan are recorded as having spoken Iranian languages[clarification needed]. Obviously, this was before the Turkic cultural arrival[clarification needed]. And Tabari in 235 A.H.[clarification needed] also mentions that poets in Maragheh recited poetry in Pahlavi. Some Azerbaijani poets however, such as Qatran Tabrizi (d465 A.H.), used the word "Persian" and "Pahlavi" interchangeably to describe their native language.

The historian Hamdollah Mostowfi even goes as far as describing variants of "Pahlavi" spoken in different areas of Azerbaijan. In his book Tarikh Gozideh, he describes eight poets from Azerbaijan, calling them "Ahl-ol She'r Men-al-Ajam" (Iranian poets), all Persian=speaking. By now,[clarification needed] of course, Dari and Pahlavi had merged into one, as successive dynasties moved from east to west, bringing with them the Dari version of the Iranian language.

Suffice it to say that the number of records and documents from Azerbaijan in the Pahlavi language are so numerous that there is little doubt that this was indeed the native tongue of Azerbaijan before the arrival of the Turks. Many words in the current Azeri vocabulary are in fact of Pahlavi origin. (See studies in Nashriyeh Adabiyaat of Tabriz University, by Dr Mahyar Navabi, 5, 6. Also see Farhang e Kamaleddin Teflisi and Ajayeb ol-Makhluqaat by Najibeddin Hamadani[clarification needed], and the books Majmal-ol-Tavarikh wa al-qasas and Iskandar-Nameh e Qadeem for lists of words.)

It is agreed that the current Turkic form of the Azeri language supplanted and replaced Pahlavi in Azerbaijan before the Safavid dynasty, perhaps starting with the arrival of Seljukian Turks, and following a gradual course. But some historians report Pahlavi being spoken in Tabriz as late as the 17th century. (See Rowdhat ul-Jinan by Hafez Hosein Tabrizi (d997 A.H.), and Risaleh ye Anarjani written in 985 AH). Even the Ottoman Turkish explorer Evliya Celebi (1611-1682), mentions this in his Seyahatname. He also reports that the elite and learned people of Nakhichevan and Maragheh spoke Pahlavi, during his tours of the region.