The official languages of the Republic of Cyprus are Greek and Turkish.[1]:art. 3, § 1 In the break-away Northern Cyprus, Turkish was made the only official language by the 1983 constitution.[2]:4.5 The everyday spoken language (vernacular) of the majority of the population is Cypriot Greek, and that of Turkish Cypriots is Cypriot Turkish. For official purposes, the standard languages (Standard Modern Greek and Standard Turkish) are used.

Three "religious groups" are recognised by the constitution; two have their own language: Armenian (the language of Armenian Cypriots) and Cypriot Arabic (the language of Maronite Cypriots). Sometimes Kurbetcha, the language of the Kurbet, the Cypriot Roma, is included alongside the other two in literature, but it is not officially recognised in any capacity.[3]

The languages of Cyprus have historically exerted influence on one another; Cypriot Greek and Cypriot Turkish borrowed heavily from each other, and Cypriot Greek has helped shape Cypriot Arabic's phonology.[5]:84[6]:223

Greek was originally brought to Cyprus by Greek settlers in the 12th–11th century BCE,[2]:2.1 but contemporary Cypriot Greek (CG)—the mother tongue of Greek Cypriots—evolved from later Byzantine Koine, under the influence of the languages of the many colonisers of the island. CG differs markedly from Standard Modern Greek (SMG),[7] particularly in its phonology, morphology and vocabulary, and CG may be difficult for speakers of other varieties of Greek to understand[8]:1886 or may even be unintelligible to some.[9]:26[10]:61 CG has a literary tradition that flourished before the Ottoman conquest of 1571.[11]:392

SMG has been the language of instruction in Greek Cypriot education since the late 19th century (then Katharevousa) and is the language used in Greek-language media in the country (though in a recognisably Cypriot form).[12] Indeed, Greek Cypriots are diglossic, with SMG the high (taught) and CG the low variety (naturally acquired), itself a dialect continuum that has been long undergoing levelling and koinénisation. SMG exerts a continuing influence on CG, and CG speakers code-mix and code-switch between the two varieties in formal settings. Greek Cypriots' tendency to "downplay the differences between the two varieties"[9]:35 has been thought to help preserve diglossia in circumstances that would have otherwise led to the demise of the low variety (CG).[3]:534–535[8]:1887

Turkish Cypriots have traditionally (prior to 1974) been fluent in CG, meaning CG served as the "vernacular lingua franca" of the island.[8]:1886 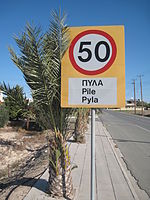 Cypriot Turkish is the language of Turkish Cypriots. Turkish was brought to Cyprus by the Ottoman conquerors in the late 16th century AD.[2]:2.1 Cypriot Turkish has been placed in the Central Anatolian group of Turkish dialects (though there appears to be some disagreement in literature).[3]:510

Two minority languages are covered by the European Charter for Regional or Minority Languages in Cyprus, Armenian and Cypriot Arabic.[13]

Armenians have inhabited Cyprus since the sixth century AD, but about 9,000 more arrived from Turkey in the early 20th century to escape the Armenian Genocide. Of those, most moved on to other countries. Today, Western Armenian is taught in Armenian schools (Nareg) and is the first language of about 3,000 people of Armenian descent in the Republic. Armenian Cypriots are bilingual in Greek and Armenian.[3]:507–509 In 2014, it was reported that there are 668 Armenian first-language speakers in Republic of Cyprus-controlled areas (of a total 1,831 Armenian Cypriots).[14]:3

It is not entirely clear when Arabic first made its way to Cyprus, but Arabic speakers are known to have emigrated from the Levant in the late 12th century AD.[6]:220 Today, Cypriot Arabic (CA) is moribund with efforts being made to revitalise it. It is spoken by an estimated 900 Cypriot Maronites, all over the age of 30. Kormakitis was a long-time stronghold of the language, but most Maronites relocated to the south and spread after 1974, fuelling its—now very likely—death.[3]:507 CA speakers are bilingual in Greek and CA, and CA, having long existed cut off from other varieties of Arabic, has been heavily influenced by Cypriot Greek, with respect to its syntax, vocabulary and, particularly, phonology: it has lost all emphatic consonants and stop voicing opposition. CA has traits in common with some north Syrian and Mesopotamian dialects and sedentary vernaculars spoken on the Levantine coast.[6]:220–222 Cypriot Arabic has not so far been codified, though there are plans to do so.[15]:3 In 2014, it was reported that, in the 2011 census, of all 3,656 Maronite Cypriots in Republic of Cyprus-controlled areas "none declared [Cypriot Arabic] to be their first language".[14]:4

There is an unknown number of Roma, speakers of Kurbetcha (or Gurbetcha), a creole with vocabulary that is predominantly Romani and Cypriot Turkish grammar, residing in Northern Cyprus. Kurbetcha is not protected by the Charter and has been little studied.[3]:508–509,536–537,549

Proficiency in English is high (higher than in many other European countries), and Cypriots that receive education in English might code-switch between Cypriot Greek and English. English features on road signs, public notices, and in advertisements, etc.[8]:1888 English was the sole official language during British colonial rule and lingua franca (until 1960) and continued to be used (de facto) in courts of law until 1989 and in legislature until 1996.[2]:4.4 A reported 80.4% of residents of Cyprus perceive to have command of the English language as L2, a 10.8% of French, a 4.6% of German, a 2.8% of Russian, and a 2.0% of Spanish. On average, Cypriots speak 1.2 foreign languages.[16]:6 According to the Eurobarometer, 76% of people of Cyprus can speak English, 12% can speak French and 5% can speak German.[17] 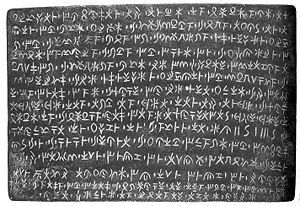 The Idalion tablet, inscribed in the Cypriot syllabary, from the fifth century BCE. The tablet is named after Idalion or Idalium, one of ten ancient Cypriot city-kingdoms

The Cypro-Minoan syllabary and earlier languages

It is reckoned written language first made its appearance in Cyprus in the 16th century BCE with the yet-to-be-deciphered Cypro-Minoan syllabary, an offshoot of Linear A "with some additional elements of hieroglyphic affiliation" that was the basis for the later Cypriot syllabary.[18]:109–110 The Cypro-Minoan syllabary may have been used to write more than one language.[19]:60ff.

The ancient Arcadocypriot dialect of Greek was spoken by the Mycenaean Greeks to first settle in Cyprus in the 12th or 11th century BCE. It was eventually succeeded by Koine Greek in the fourth century BCE[3]:509 and later Byzantine Koine evolved into Cypriot Greek.[7]

Eteocypriot was a pre-Indo-European language, indigenous to the island, that competed with Greek following the latter's arrival and was ultimately supplanted by it by the third century BCE. It was written in the Cypriot syllabary that was adopted for Arcadocypriot; the same writing system was used to write both (unrelated) languages. For the time that the two languages co-existed, the peoples of Cyprus were bilingual (and bicultural).[18]:115–116